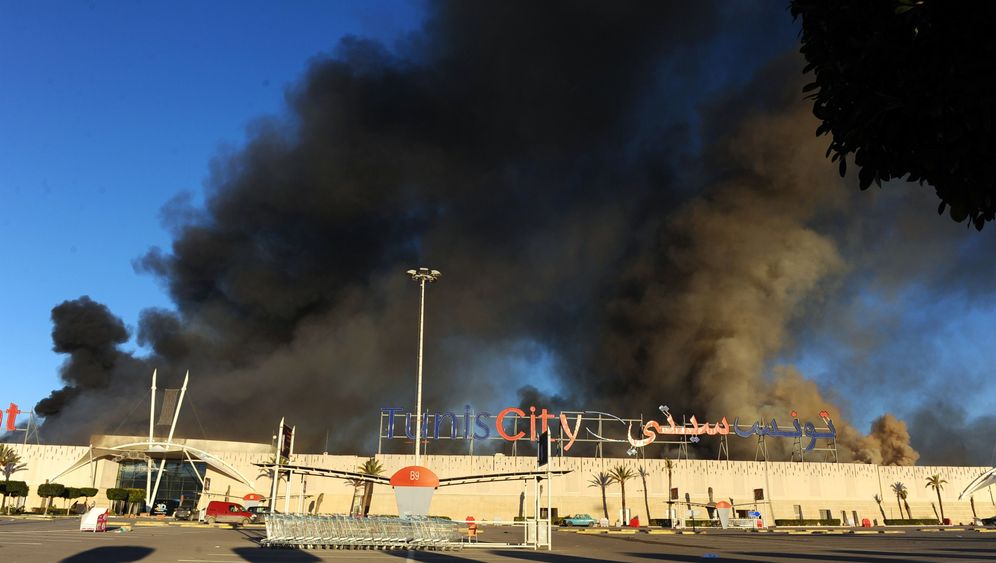 They are heavily armed, but they're not in control. Soldiers and police patrolled the streets of Tunis nervously on Monday after Tunisian special forces had fought a gun battle with security guards loyal to the ousted president, Zine al-Abidine Ben Ali, on Sunday night.

Bursts of gunfire echoed through the streets of the Tunisian capital on Sunday. Radio reports said the commander of the security force had been arrested. Sources close to the police and the military said there had been a shootout near the central bank headquarters and that two gunmen had been killed. Eyewitnesses reported looting. Army tanks were stationed on the streets.

Foreign reporters who wanted to reach a hotel in the city center on Sunday were escorted by troops for the last few hundred meters to the building. "It's extremely dangerous here, the terrorists are everywhere," one soldier warned reporters. Plumes of smoke hung over Tunis from the arson that accompanied the protests.

On Sunday, one eyewitness reported that police and soldiers were chasing gunmen who were firing indiscriminately at passers-by from hijacked taxis.

Just a few days ago Tunisia's police was firing at protestors. Now they are protecting people from marauding gunmen.

The situation in Tunisia, which has just freed itself from a decades-long dictatorship, is complicated. It seems as though the majority of security forces have accepted the changeover, but that a hard core has decided to remain loyal to the exiled president. There are rumors in Tunis that the president's bodyguard, the "Black Tigers," have been hijacking taxis and shooting at people. They are reported to be unwilling to accept Ben Ali's departure and are trying to sow chaos and fear.

It is hard to ascertain whether the rumors are true. On Sunday afternoon it was impossible to leave the hotel with gunfire intensifying in the area as the sun set. Tanks were firing shells, helicopters were clattering over the roofs. The main train station nearby seemed to be the focus of the fighting.

On Sunday, Ben Ali's former head of security, General Ali Seriati, was detained in the south of the country as he was trying to flee to neighboring Libya, the AFP news agency reported, citing official sources. Seriati was brought to Tunis and placed in custody there, the report said. Tunisian television cited a government representative as saying that Seriati and members of the presidential guard were accused of being behind the latest violence against demonstrators.

Police sources said some 50 gunmen have been detained after shooting at people from ambulances, taxis and rental cars. Eyewitness said a nephew of the ousted president was among those arrested. Kais Ben Ali and 10 other members of the military had been arrested in the Tunisian town of Msaken. Security forces had been alerted when the suspects raced around in police cars firing indiscriminately to cause panic, reports said.

The protests that forced Ben Ali to flee have died down, but the politicians, many of them former supporters of the ousted president, need to maintain the momentum of progress toward promised elections, or they will face a renewed uprising.

Prime Minister Mohamed Ghannouchi promised rapid action to fill the power vacuum and said a new government would be instated on Monday "which will open a new page in the history of Tunisia."

Ghannouchi is regarded as moderate and as a good mediator, but many Tunisians mistrust him because he was close to the ousted government. He had defended the state's crackdown against demonstrators during the protests last week.

The Reuters news agency reported that three opposition leaders would take posts in the new coalition. It said Najib Chebbi, founder of the Progressive Democratic Party (PDP) which opposed Ben Ali, will become regional development minister. Ahmed Ibrahim, head of the opposition Ettajdid party, is to become education minister and Mustapha Ben Jaafar, the head of the Freedom and Labor trade union, is to become health minister.

Ahmed Friaa, a former academic and junior minister appointed interior minister only last week when Ben Ali fired the previous incumbent during the rioting, would stay in his job, along with Foreign Minister Kamel Morjane, the report said.

Speaker of Parliament Fouad Mebazza, a former supporter of Ben Ali, was sworn in as interim president. Mebazza is now promising democratic change and a "government of national unity" that includes opposition forces. Mebazza and many others in the former circle of power are reputed to be authoritarian and corrupt -- but he isn't as unpopular as other leading politicians.

It is unclear if the interim government will really allow democratic change and new elections, or if it will just pave the way for the next authoritarian ruler. But the Tunisian uprising will serve as an example for millions of Arabs who have been suffering under corrupt rulers for decades. Opposition groups in several Arab countries were voicing optimism at the weekend.

In Jordan, almost 3,000 people staged a sit-in in front of the parliament building to protest against the government's economic policy on Sunday, AFP reported, adding that trade unionists, members of left-wing parties and Islamists took part in the demonstration.

In Egypt, the left-wing Karam party said: "The Tunisian people has paid the price of freedom and toppled the tyrant."

In Lebanon, newspaper An-Nahar commented: "The echo of this unprecedented event in the Arab world will be undoubtedly heard in more than one country in the region."

But for the time being, Tunis and its surroundings are in a state of emergency. The continuing violence and unrest are preventing the country from restoring calm and returning to normal. An eyewitness said citizens had formed their own militias and erected roadblocks to stop looters and rioters.

Tunisians are particularly afraid of the 1,000 prisoners that fled after their prison near Monastir caught fire on Saturday night. Men armed with sticks are keeping watch on the streets of Tunis to stop crime.

The Tunisians, it seems, are continuing to defend themselves.