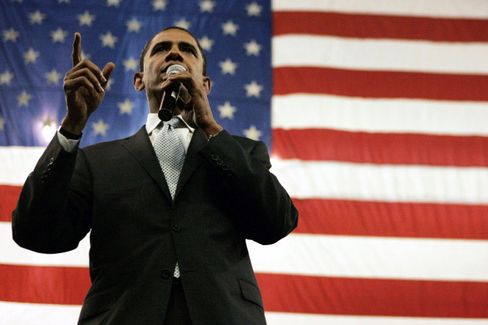 Barack Obama would like to hold a speech in front of Berlin's Brandenburg Gate, symbol of Germany's Cold War division and subsequent unity.

When is he coming, who will he meet, and, more importantly: What will he say? For days now, Berlin has been abuzz with speculation over plans for Barack Obama's first trip to Europe as the presumptive Democratic presidential candidate. A July 24 date has been set by the campaign for a Berlin visit and more details are gradually emerging. During his visit to the German capital, Obama plans to hold a keynote address on trans-Atlantic relations.

"During this campaign, Senator Obama has been criticized for his lack of interest in Europe," an Obama campaign adviser with knowledge of the planning for the trip told SPIEGEL ONLINE. "This trip is partly a response to this, and I am sure he wants to address the issue of trans-Atlantic relations."

The possibility has not been ruled out that the speech could instead be given in Paris or London -- the other stops on Obama's short Europe trip. But Obama's team likes the location of Berlin and the Brandenburg Gate. "The setting would be great," the advisor said. "The memory of John F. Kennedy's famous Berlin speech is still alive. Berlin is a bridge between East and West, and the German-American relationship is very strong," said the advisor.

US President John F. Kennedy was given a rousing reception by the people of West Berlin during his visit in 1963 when he held his famous "Ich bin ein Berliner" speech in front of the town hall in Berlin's Schöneberg district -- which lies several miles from the Brandenburg Gate.

The German government has already announced that it would give Obama a warm welcome but also voiced concern that an Obama speech in front of the Brandenburg Gate may be misinterpreted as German interference with the US election campaign.

However, the decision on whether the Democratic candidate will be able to hold a speech at that location is up to the Berlin city council, not the German government. "We hope it will work out," said the advisor.

So far only the outlines of Obama's speech have been decided. But it's clear that he will attempt a difficult balancing act between promising a new era of closer trans-Atlantic ties while not appearing too "European" at the same time.

"Obama wants to signal to the Europeans that he will reach out much more to the trans-Atlantic partners than George W. Bush did. You will hear the words 'I can listen' frequently in his speech," said the advisor.

The message will also be directed at voters back home because it will signal that America's reputation in Europe would improve drastically under a President Obama, the advisor said. "TV pictures of 100,000 cheering people in Berlin can drive home that point."

At the same time the senator from Illinois must take care not to seem overly pro-European. Many Democrats still recall how their presidential candidate John Kerry four years ago gushed about his good reputation in Europe only to be successfully and pejoratively labelled as "European" by the Republicans as a result.

"We are aware of that risk," said the advisor. "A voter in North Dakota doesn't care much for the trans-Atlantic agenda. He would rather ask: What is Obama planning to do for me?"

It's therefore unlikely that Obama will wax lyrical about Europe's leadership on combating climate change or health insurance. And he won't shy away from some "tough love" in his speech, said the advisor, noting that he would spell out clearly that Europe needs to assume more international responsibility, especially in Afghanistan, and perhaps in Iraq as well.

The Democrat may also urge the European Union not to get caught up in internal problems in the wake of Ireland's rejection of the EU reform treaty. Obama will spend one day in Berlin at the very most.

The senator may combine his Europe visit not only with stops in Israel and Jordan but also with his planned trip to Iraq and Afghanistan. Those latter two stops are far more important for the US election campaign than his Germany visit.

But regardless how brief his stopover in Berlin will be, Obama will meet Chancellor Angela Merkel. His advisors are also trying to make time for a meeting with Foreign Minister Frank-Walter Steinmeier, partly to get a better understanding of both camps in Germany's grand coalition government -- Merkel being a conservative Christian Democrat and Steinmeier a center-left Social Democrat.

The German government is treading carefully. Merkel and Steinmeier want nice pictures with the Democrat who is highly popular in Germany. But they can't take sides too openly in the US election campaign, which is why Berlin has misgivings about giving Obama the grand symbolic stage of the Brandenburg Gate.

Merkel's office on Monday diplomatically declared that it was greatly looking forward to Obama's visit. But, it added, Republican contender John McCain was of course most welcome anytime as well.