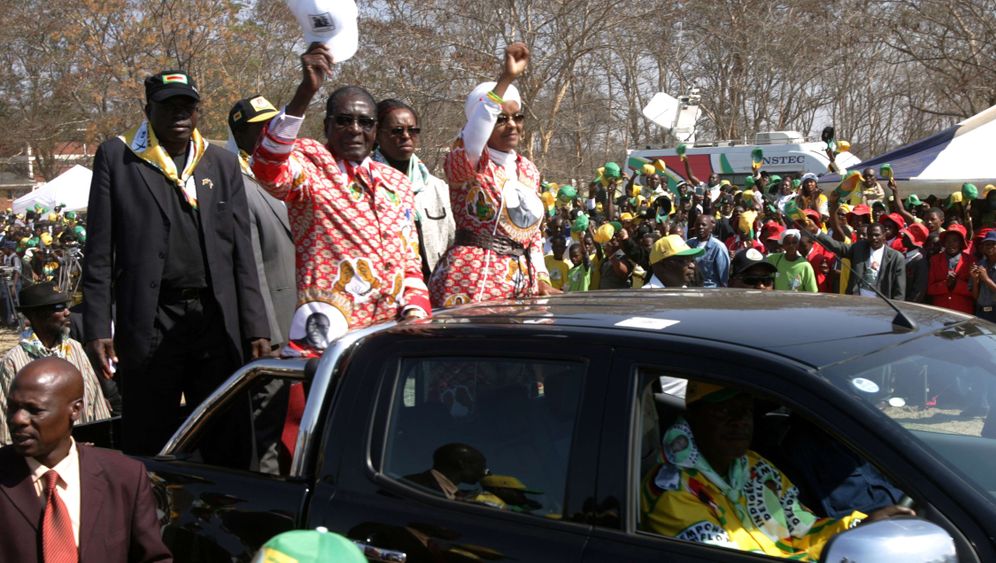 Even after a week's search, there are no 100-year-olds to be found in Harare, the Zimbabwean capital. There isn't even anyone who knows a centenarian. Still, there ought to be plenty of very old people in Zimbabwe, because exactly 116,195 of its 13 million citizens have supposedly reached this biblical age. If that were the case, Zimbabwe would be home to nine times as many centenarians as Germany.

"It's easy to explain," McDonald Lewanika says wryly: "These people don't exist. They are phantom voters." Lewanika is the director of the Crisis in Zimbabwe Coalition, an alliance of regime critics. "The voter list is bogus. I'm afraid the result is already clear: The old man will win again."

The "old man" is Robert Mugabe, 89, president of Zimbabwe for the last 33 years, since Lewanika was born. During this time, his regime has practically ruined the country, and yet he has been repeatedly re-elected, with completely implausible election outcomes. Through a series of manipulations, Mugabe's power machine has also made sure that this week's presidential and parliamentary elections are decided in advance.

The large number of 100-year-olds is just one of many oddities. According to the voter lists, 63 districts have more voters than residents. And in the rural strongholds of Mugabe's party, the Zimbabwe African National Union-Patriotic Front (Zanu-PF), there was a miraculous increase in eligible voters, while their numbers were corrected downward in urban areas where, coincidentally, many supporters of the main opposition party Movement for Democratic Change (MDC) live. More than a million people on the voter lists are either dead or have moved away. And 1.9 million citizens under 30 were not even included on the rolls, according to experts with the Research and Advocacy Unit, which analyzed the voter lists. Only those whose names appear on the lists are allowed to vote.

The remaining possible supporters of the opposition are intimidated to ensure that they vote for Zanu-PF. The regime has reportedly distributed 50,000 members of party militias across the country. Dissidents are systematically persecuted, locked up and tortured. In June, a former Zanu-PF cabinet minister who had exposed senior politicians' involvement in diamond deals was killed in a mysterious traffic accident.

Glen View on the outskirts of Harare is a densely populated, dilapidated neighborhood, with potholed dirt roads, mountains of garbage and wrecked cars by the roadside. The majority of Glen View's impoverished residents sympathize with the opposition.

A woman waits by the side of the road. She wears a broad-rimmed straw hat to avoid being recognized. It's dangerous to be seen with white foreigners. She calls herself an activist fighting for democracy, but for security reasons she wants to remain anonymous. "In the 2008 election campaign, Mugabe's gangs of thugs set houses on fire and beat up people wearing red clothing, the color of the MDC," the woman says. "We haven't forgotten that." Today the Big Man, as he is called here, doesn't need to resort to brute violence. It's enough, she says, for his people to go from door to door and hold up matches. "Glen View is practically paralyzed. People are afraid."

The live broadcast of a campaign event is on the TV screen in a beer pub in Glen View. Mugabe talks and talks, speaking for an entire two hours. He clings to the podium, mumbles, becomes muddled and gets the African Union confused with the European Union. He faces a sea of yellowish-green caps and T-shirts, either real supporters or people who were bussed in to cheer the president, the "God-chosen leader for Zimbabwe," as Mugabe's wife Grace calls him.

The geriatric dictator seems exhausted and fragile. He has advanced-stage prostate cancer and has reportedly had two or three mild strokes recently. But his will to stay in power keeps him going. He wants to bring in the harvest of fear and show the world, once again, that he can win.

'The Kiss of Death'

Mugabe is at his best when he announces his rescue plan for the ailing country. He wants to "indigenize" -- that is, expropriate -- 1,138 foreign companies and turn them over to the majority control of local businesspeople, cleaning up the government's budget in the process. "That would be the next pilferage after the catastrophic land reform," says a market expert who prefers to remain anonymous. "It would be the kiss of death for Zimbabwe."

The country's rapid decline began with the land grab 13 years ago, when 4,000 white farmers were expropriated and driven out. Since then Zimbabwe, once a breadbasket, has had to import corn. In addition, some 1.5 million Zimbabweans would starve without the food provided by international aid organizations. Three million have emigrated to South Africa, in the search for bread and work.

After the so-called agrarian revolution, the economy has declined by as much as 40 percent a year, with unemployment topping 90 percent. In 2009, the currency collapsed and was replaced with the US dollar, after inflation had reached the unimaginable figure of 60 billion percent.

Mugabe liberated his country in its struggle against British colonial rule -- and then he turned it into a poorhouse. But in his eyes, others are always to blame for Zimbabwe's troubles: the British, neo-imperialists, whites, the West with its sanctions.

Ironically, the man charged with "indigenizing" the economy is named Saviour Kasukuwere, a giant of a man, as heavy as a prize fighter. His supporters call him "Tyson." Kasukuwere, 42, the youngest minister in Zanu-PF, has his office on the 20th floor of a high-rise building in downtown Harare. It's a large office with flashy leather sofas and a view of the city.

Is it possible that party leaders are trying to line their pockets with the help of expropriations? That's complete nonsense, Kasukuwere grumbles. "It's about fighting poverty. We are liberating ourselves from economic apartheid." He sounds like Mugabe, which is probably one reason he is mentioned as a possible successor. There are rumors that the president told a politician friend from Zambia that he intends to step down shortly after winning the next election.

"The preparation for these elections was much too short, and the requirements under the new constitution were not met," says a Western diplomat. "We just hope that the election is peaceful. And that the military doesn't stage a coup if the wrong outcome is achieved." Representatives of the United States and the European Union have already announced their intention to lift the remaining sanctions against the regime if the election remains peaceful.

But that is by no means certain. The majority of the people no longer believe Mugabe's bluster. In the last presidential election, in 2008, he lost the first round against MDC leader Morgan Tsvangirai, 61. To secure a Mugabe victory in the runoff election, the police, military and party militias terrorized the population, and more than 200 people were killed.

Neutral election observers are not allowed. Only the envoys of friendly nations are permitted to monitor the vote. "Once again, the elections are neither free nor fair. And, once again, Mugabe will steal victory," predicts Blessing Vava, 30, one of the many bloggers who, for lack of an independent press, are gaining more and more supporters.

The best known of them is "Baba Jukwa," who discovers new machinations on the part of Zanu-PF every day and has 286,000 supporters on Facebook. Baba Jukwa is a pseudonym, and no one knows who is behind the site. But the whistleblower's revelations are often correct. So correct, in fact, that Mugabe has promised a reward of $300,000 (€226,000) for his exposure.

"Many young people mistrust the political class and won't vote for the MDC, either," says Vava. "They are disappointed in Tsvangirai. Some even accuse him of being in bed with Mugabe."

Since 2009, MDC leader Tsvangirai has been prime minister in a government brokered by South Africa. But Mugabe still controls the police, military, intelligence services, judiciary and the media. Tsvangirai, the pro-forma premier and opposition leader in one, tends to make headlines because of his womanizing activities. Some of his fellow party members have become just as corrupt as the Zanu-PF fat cats, driving flashy official cars and living in attractive villas. The opposition is deeply divided and has failed to come up with a shared candidate.

In the Book Café in Harare, where artists, intellectuals and students meet, no one takes the politicians seriously anymore. Most of the patrons are under 30, part of a new, skeptical generation that gets its information from the Internet and sees no future in its country.

Three performers are doing a parody of the news broadcast by ZBC, the propagandist government broadcaster, on the stage at the café. One actor is playing a journalist, who is reporting from a village and holds up a sealed ballot box, already stuffed with 50,000 ballots before the election day. "Respect our ancestors!" says the host, and the people in the audience laugh. They know all about the many dead people on the voter lists.