A small number of Americans will be able to vote in the midterm elections this November by taking a selfie-style video and downloading an app. West Virginia is the first and only state to test out Voatz, a voting app for smartphones. The experiment, which is largely directed at military personnel serving overseas, will allow the soldiers to cast their votes digitally as an alternative to cumbersome absentee ballots.

"There is nobody that deserves the right to vote any more than the guys that are out there, and the women that are out there, putting their lives on the line for us," says Republican Mac Warner, West Virginia's secretary of state and chief election official. In light of the ongoing revelations about Russian cyberattacks, others, meanwhile, are horrified by the prospect, arguing that smartphone voting is highly vulnerable to hacking. They accuse the Voatz startup of a lack of transparency, glaring technological flaws, of providing a lack of information relating to its system architecture and of having a dubious public image.

Users register with Voatz by taking a photo of their government-issued ID, as well as a selfie video of their face, which they then upload within the app. The startup maintains its facial recognition software can tell whether the video and the photo of the ID show the same person. Once a user has been approved, that person can then use the app to cast their vote.

The digital ballot is then verified and added to the blockchain, a digital ledger originally devised for digital currencies such as bitcoin. "Because blockchain is a distributed ledger of transactions, military mobile votes become immutable and tamper-proof once recorded," Voatz claims.

Is It Really Safe?

Ultimately, no one can say with certainty whether Voatz's app is secure. Nimit Sawhney's startup launched the software several years ago, and it went on to win a number of awards. But there is very little proof that it is invulnerable.

DER SPIEGEL sent Voatz a detailed list of questions to give the startup the opportunity to allay concerns. Although a short reply indicated that the PR team had received the mail from the reporters at DER SPIEGEL, the company has yet to answer any of the questions.

In May, the company launched a pilot test in primaries in two districts in West Virginia. It was deemed a success, even though only 11 voters used the technology in both districts. Now, an expansion is planned for the midterms, when soldiers from West Virginia who are stationed overseas, as well as their families, are to elect a new senator and new members of the House.

The news comes amid a tense debate over the apparent ease of hacking American democracy. Memories of the events of the presidential election two years ago are still fresh in peoples' minds. A flood of new information about Russian attempts at manipulation emerged after Donald Trump's election. Several Congressional committees, as well as the FBI and a special counsel are also currently probing connections between the Trump camp and Moscow.

The intelligence services are certain that Russia will not shy away from continuing efforts to meddle in U.S. politics, even during the upcoming congressional midterm election. "Of course. I have every expectation that they will continue to try and do that," Mike Pompeo, the head of the CIA, told the BBC in an interview earlier this year. In February, Dan Coats, the director of national intelligence, concurred during a hearing in Washington. "There should be no doubt that Russia perceives its past efforts as successful and views the 2018 U.S. midterm elections as a potential target for Russian influence operations," he said.

About a year ago, the Department of Homeland Security informed about half of all U.S. states that their systems had been targeted by hackers with alleged connections to Russia before the 2016 elections.

Given the many points of criticism about app voting, it would be interesting to find out how the pilot project in West Virginia came about. Did the buzzwords "biometry" and "blockchain" convince officials to give Voatz a chance?

The State Election Commission didn't respond to questions on the subject. "The process that West Virginia went through to make an agreement with Voatz is entirely opaque," crticizes Jones. Other election-technology experts, like David Eckhardt, a professor of computer science at Carnegie Mellon University, have more fundamental attitudes about it. Eckhardt rejects online systems for elections in any manner.

It's difficult to predict how many votes will be submitted via Voatz in November. Each of West Virginia's 55 electoral districts can decide on its own whether its registered soldiers and their families will be provided wtih Voatz as an alternative to the ways of voting currently offered. Anyone who wants to vote by smartphone also needs an iPhone 5s or a more recent model, or one of a select number of Android devices that are less than two years old.

For safety's sake, the Voatz system is meant to back up each vote with a paper printout, so that the State Election Commission can later audit the results if needed. But Voatz hasn't stated where and how the printouts will be generated.

The technology that has previously been used in U.S. elections is also considered problematic. Unlike German federal elections, in which pen and paper are used, a variety of electronic voting systems are deployed in America. Not all of them allow for paper recounts. Experts see the aging of American voting-booth computers as a "hair-raising" security problem. And, as the Voatz case shows, the situation doesn't necessarily improve when a state seeks to adopt more modern technology. 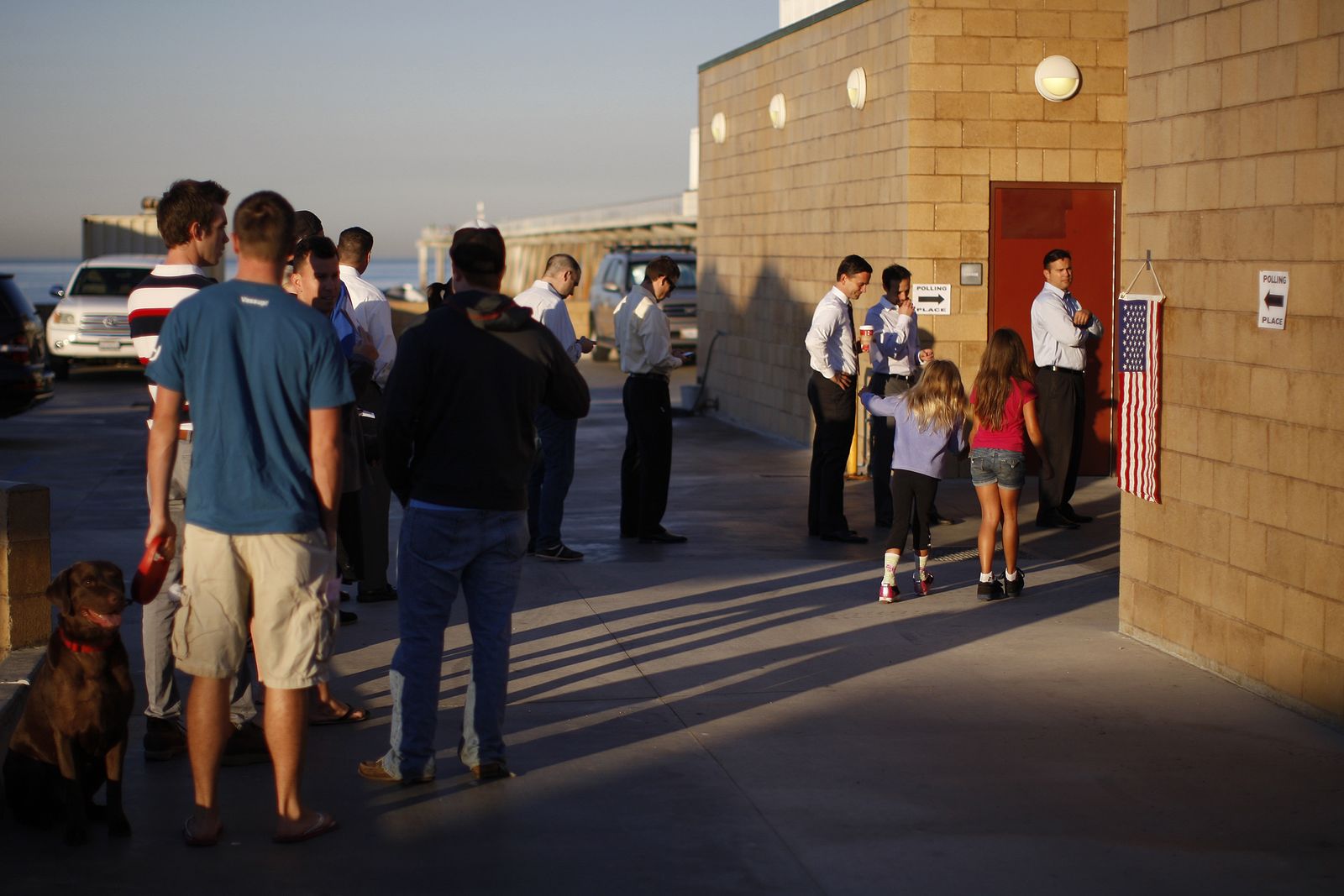 A polling station in the United States