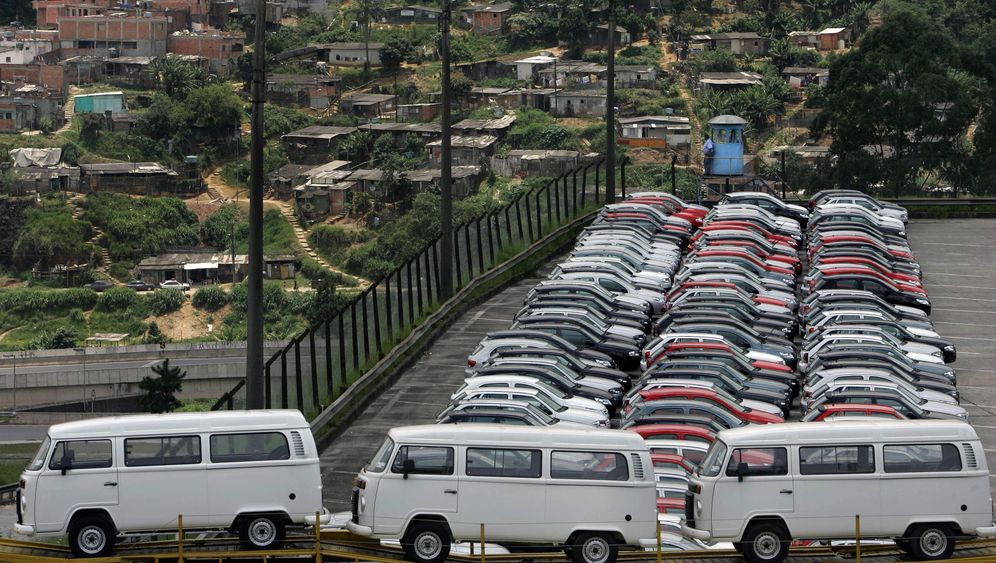 Some of them make rattling and popping noises, while others creak when heavily loaded and have rust-colored age marks. They may be old, but many are deeply cherished. New ones can still be purchased, but not for much longer, because the days of the Volkswagen Bus are numbered in Brazil, the only place the company still produces the vehicle.

Businessman Ademir Cardona, 47, gently runs his hand across a model from the 1970s. "If no one wanted them anymore, well, I'd understand that," he says. "But people are beating a path to my door to get her."

The VW Bus is feminine in Brazil, where the model, known as the "Bulli" in Germany, is called the "A Kombi." There have long been rumors about its imminent demise, but now it's official. In December, the last VW Type 2 Bus, considered a classic the world over, will roll off the line in São Paulo. That's because the vehicle is no longer up-to-date, now that Brazil will require all new cars to have anti-lock braking systems (ABS) and airbags starting in 2014. These features are simply not feasible in the 56-year-old model, VW engineers say.

"Nonsense," says Cardona. "With a little good will, they could do it." He has already installed power steering, power windows, reclining seats and air-conditioning in his VW Buses, all features the inventors never envisioned. Cardona operates a company called Cia das Kombis in the southern Brazilian city of Porto Alegre. He has 34 vehicles in his inventory, all available for purchase or rent.

The business is going well and Cardona had planned to expand, but now he's worried about the future. "It's becoming more difficult to get parts," he says. "VW is carrying the only real people's car to its grave."

The first VW Buses were assembled in a large building near São Paulo in 1953. Four years later, Volkswagen do Brasil began series production. Hardly any other vehicle in the world has been manufactured for so long. In Brazil, the VW Bus represented an astonishingly successful marriage of German engineering and the Brazilian lifestyle. More than 1.5 million have been produced in the country, where the VW Bus is the bread-and-butter vehicle for several generations of small businesses. A new bus costs 47,000 real, or about €15,000 ($19,700), making it the most inexpensive minibus on the market.

VW Buses are ubiquitous at weekly markets and on construction sites, and they often double as mobile kiosks, ambulances and even hearses. In Rio de Janeiro, overloaded VW Buses travel up and down the hills of the city's shantytowns known as favelas, and in the Amazon region they are used to transport tourists along muddy roads and bring the indigenous people back to their villages. When a VW bus breaks down, any village mechanic with a wrench knows how to get it back on the road.

"The VW Bus is adapted technology on wheels," says Cardona. Like millions of Brazilians, he too owes his career as a businessman to the VW Bus. Twenty years ago, Cardona bought three used buses from a brewery. He sold one for a profit and rented the other two. Today his company has a reputation beyond Porto Alegre's city limits.

A customer recently had a 1966 VW Bus restored to look like the one her father once had. "During the day, he used the bus to deliver wood for parquet flooring, and at night he and his family slept in it," says Cardona.

Over the decades, Volkswagen has periodically made minor updates to the popular vehicle. Lights were installed to replace the old flip-out turn signals, which would occasionally hit pedestrians in the face when they popped out of the side of the vehicle. For a few years, the VW Bus wasn't just available with the legendary air-cooled boxer engine, but also as a diesel. However, the model wasn't well-engineered and was quickly taken off the market.

When new emissions regulations came into effect, VW installed a water-cooled engine. Since then, a black radiator grill has marred the classic front. But the change didn't hurt its popularity. This year alone, more than 13,000 VW Buses have been built, most of them assembled by hand. But customers don't have much to choose from. In Brazil, the VW Bus is only available as either a 9-seater or a delivery van. And it only comes in one color: white.

As a farewell gesture, VW will produce a final series of the bus in its former glory. The "Last Edition" commemorative series, consisting of only 600 buses, will be wearing the "skirt and blouse," as the Brazilians call the legendary luxury version from the 1960s and 70s. The model will even have curtains on the windows, and the only concession to modernity is an MP3 radio with a USB port. VW will charge 85,000 real, or about €27,000 for the collector's edition.

There is no successor to the VW Bus in sight. Volkswagen has no vehicle in its lineup that could even approach the Bus in terms of space and pricing. For this reason, anyone who owns a VW Bus today, says Cardona, should be paying attention, because prices for used models are on the rise. 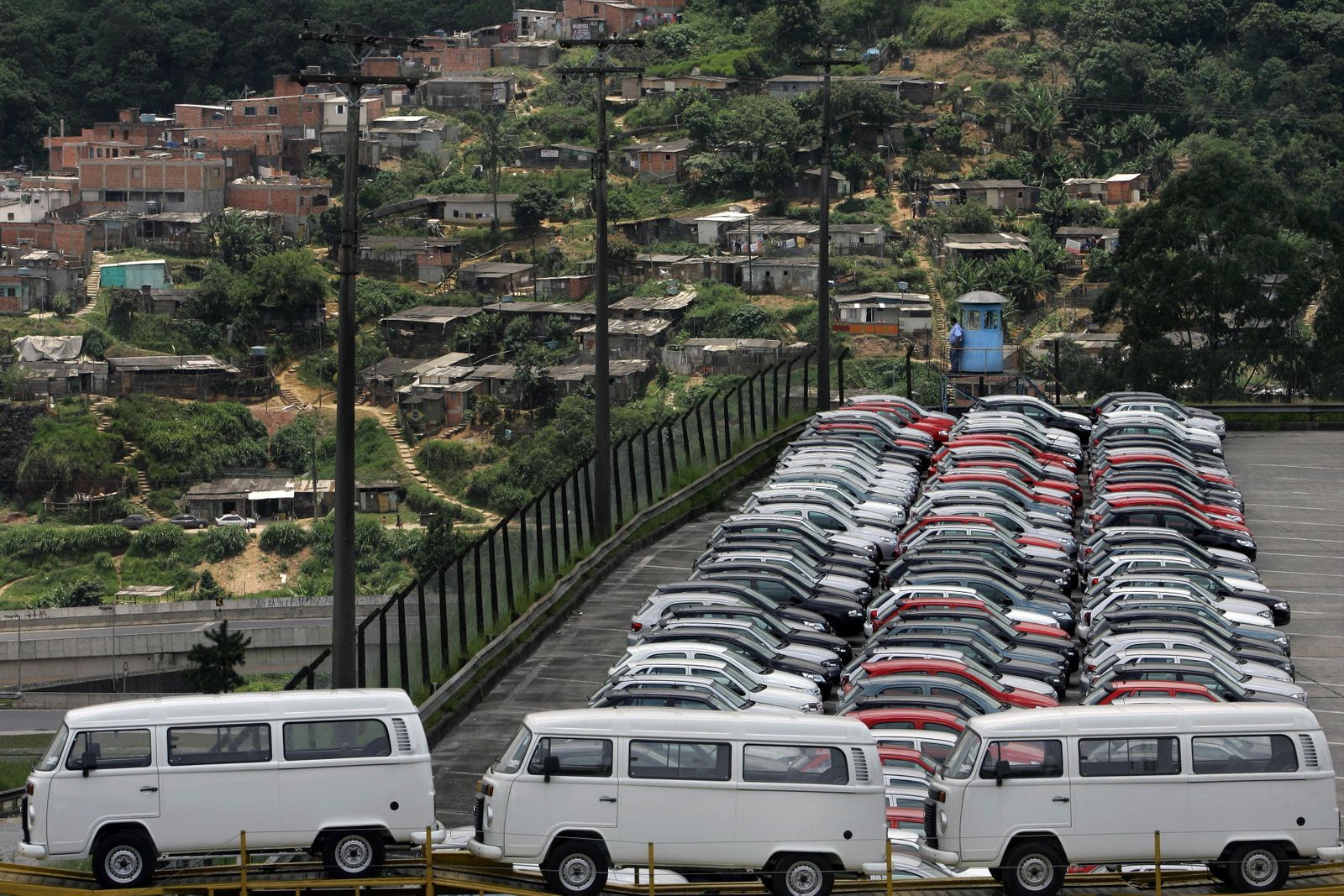 Here, T2 Kombi models, which have been produced by Volkswagen for 56 years, wait in the parking lot of Brazil's Anchieta plant in 2008. The model is among the world's oldest vehicles still in production, but not for long. In December, the last ones will roll off the line in São Paulo. That's because the vehicle is no longer up-to-date, now that Brazil will require all new cars to have anti-lock braking systems (ABS) and airbags starting in 2014. 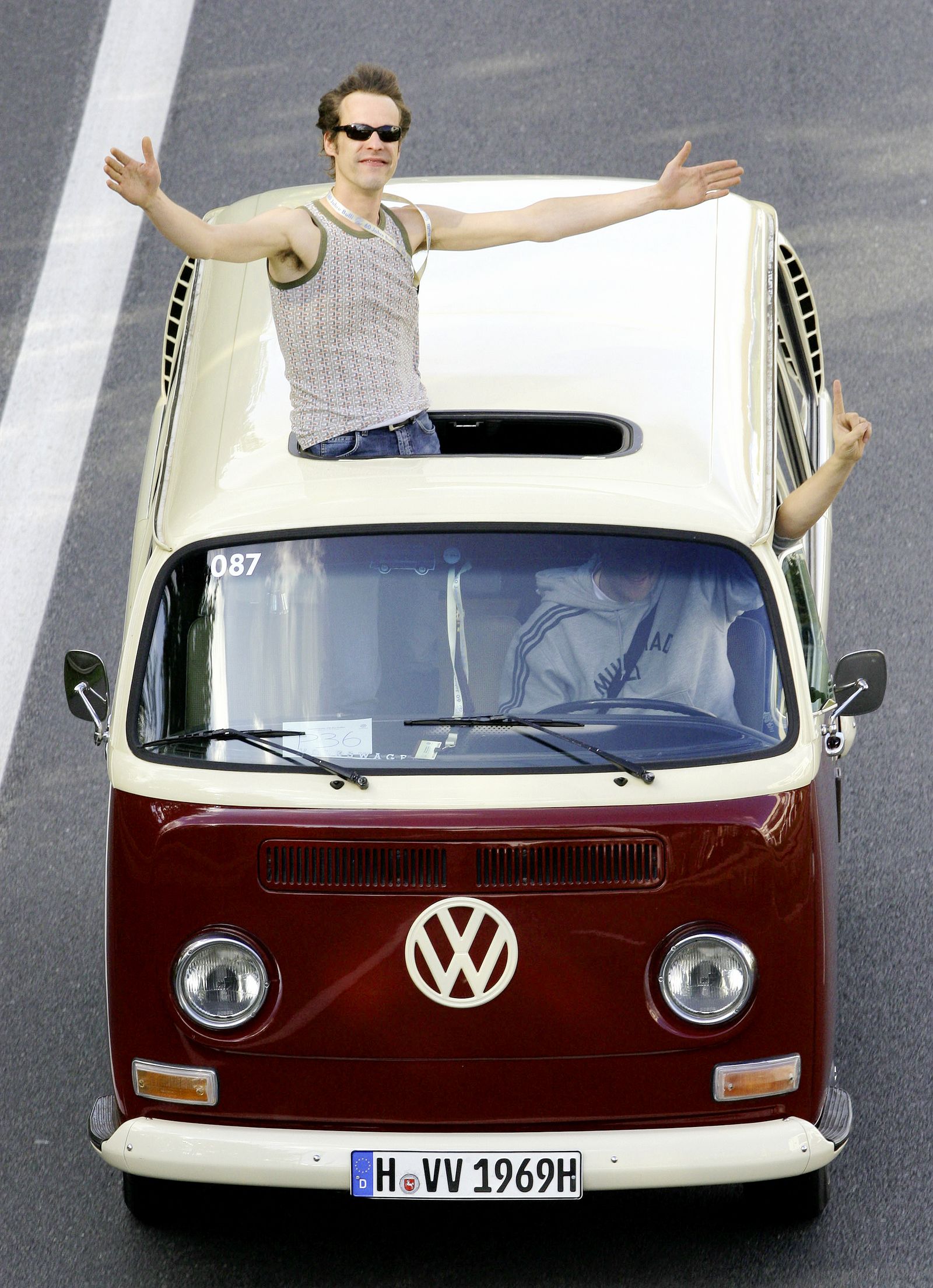 Here, an enthusiastic driver in his restored van at a German meet-up for VW Bus enthusiasts in 2007. 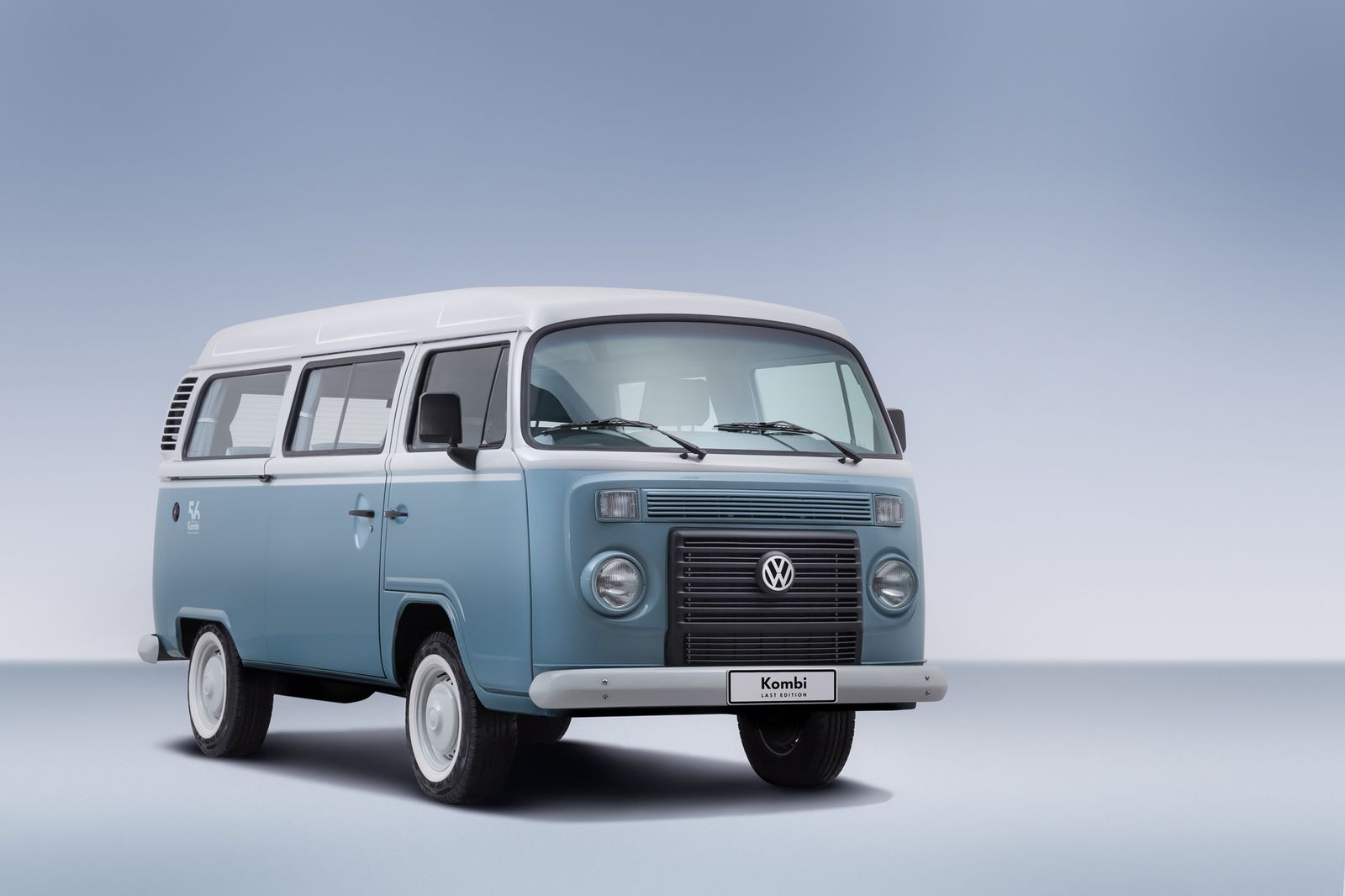 As a farewell gesture, VW will produce a final series of the bus in its former glory, shown here. 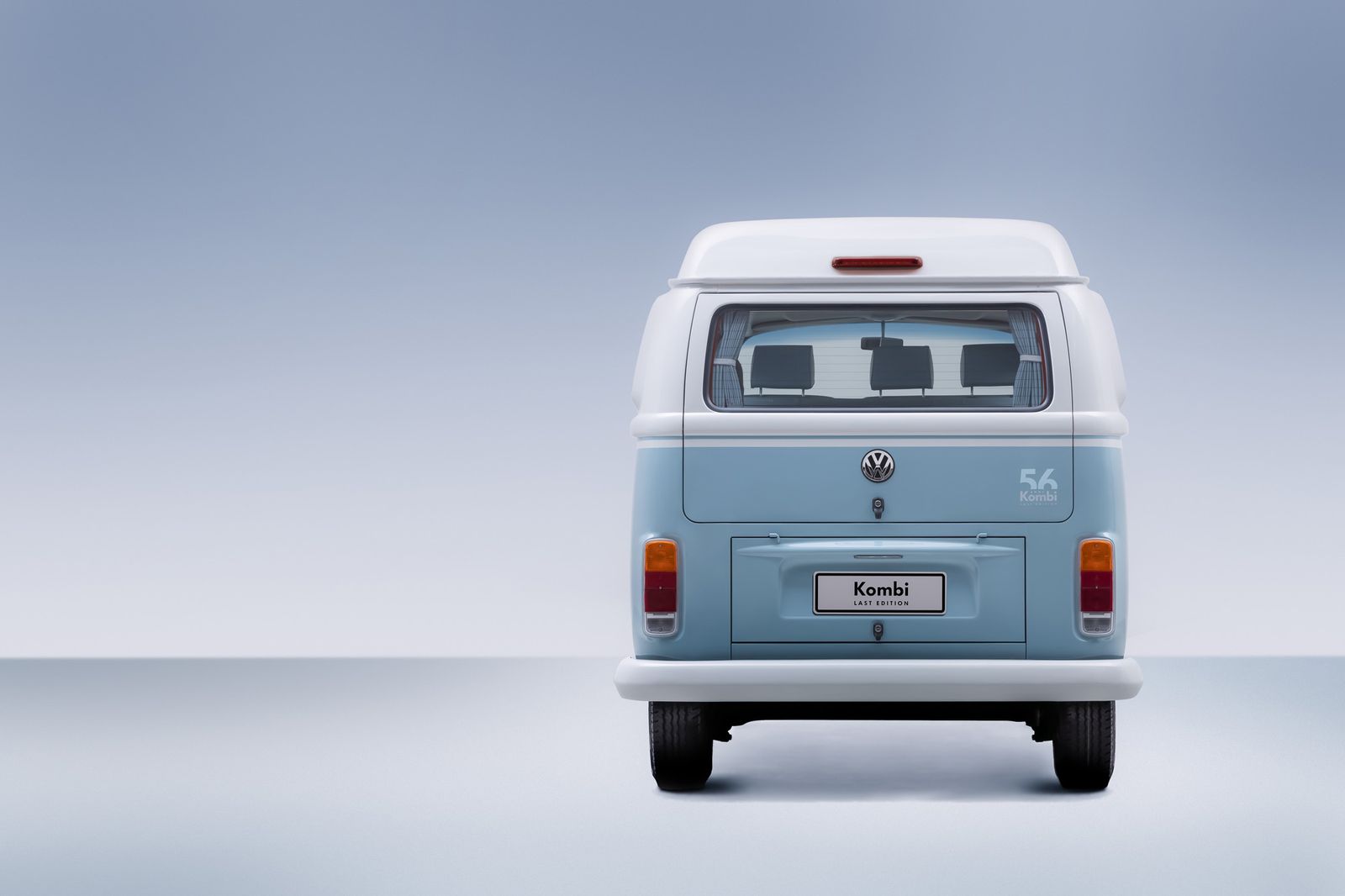 The "Last Edition" commemorative series, consisting of only 600 buses, will be wearing the "skirt and blouse," as the Brazilians call the legendary luxury version from the 1960s and 70s.