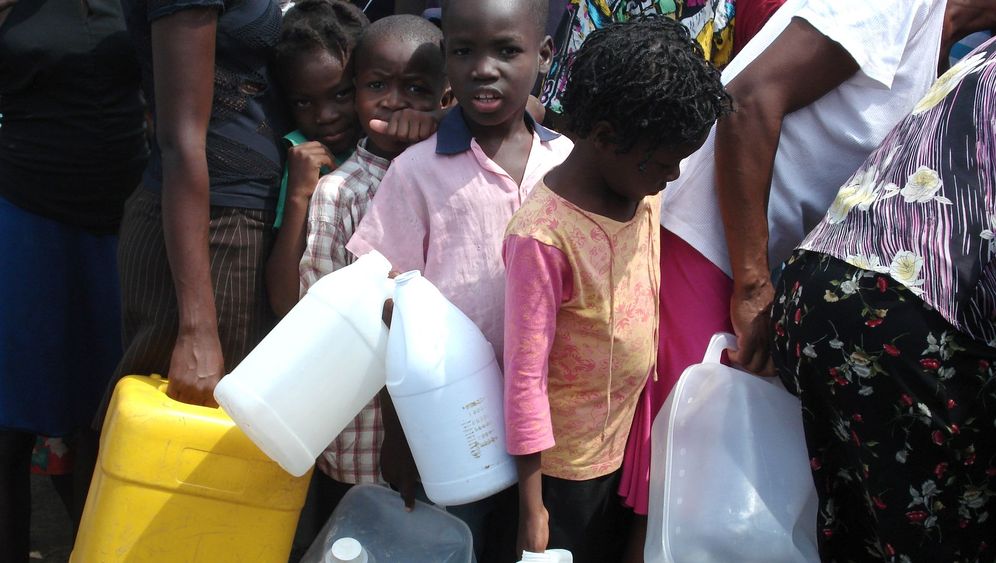 Lesly Mullin spreads his arms. His white and green t-shirt, emblazoned the number 19, is just a few numbers too big, he looks tired and he stands there speechlessly. But his gesture says it all: Everything is lost.

A couple of blue walls, one other painted pink -- there is not a lot left of his house in St. Martin, a neighborhood in Port-au-Prince, the capital of Haiti. Yet Mullin still comes here a lot. He walks up the few stairs that remain, which lead up from the small piece of land on which the house once sat, and makes his way over the concrete lumps to survey the ruins of his home.

His grandmother built this house and he was born here. Most recently Mullin, 42, lived here with his wife and four children: Clifford, Steve, Stephanie and Gary. Then came the earthquake that devastated the city on Jan. 12. Gary, who was only two years old at the time, died in the tremors.

A Nation of Mourners

One does not have to go far to hear further stories of death and disaster, the sort of stories that have turned Haiti into a nation of mourners. Just stepping outside the beige and blue tent, where Mullin and his family spend their nights now, is enough.

"This is our place," he explains. The few cubic meters are adequate enough as emergency accommodation. And the place is surrounded by a labyrinth of tents and huts made out of corrugated iron and fabric or plastic sheeting stretched over wooden frames. On the sheets are the names UNICEF (United Nation's Children's Fund), USAID (the American government's aid organization) or UNHCR (the United Nations refugee agency). There's often only about a foot of space between the temporary dwellings.

And there are hundreds of these kinds of camps. Sitting near apparent deserts of ruins, on the sides of roads or on football fields, most don't have any sort of toilets or any power. Port-au-Prince has become one big refuge for the homeless.

The largest camp has spread itself onto the city's central square, the Champs de Mars, directly opposite the ruined presidential palace. About 30,000 people live there. Despite this, the Red Cross estimates that only half of the 1.3 million poeple made homeless by the earthquake have managed to find refuge in some sort of emergency accommodation. "The needs are still huge," Gregg McDonald, the coordinator of the organizations aid efforts in Haiti, said on Sunday in Port-au-Prince.

Still Waiting for the Haitian Government

The rescue teams are still waiting for the administration to officially designate better-suited areas for emergency accommodation. The United Nations has also put pressure on the administration, but up until now nothing has happened. It has been some time now since the Haitians last heard from their president, René Préval. "He's a phantom," some say, disparagingly, of the leader, who set up a temporary office in police headquarters after the earthquake, but who has hardly been seen since. Préval has given no televised speeches nor has he made any visits to the tent cities.

What the people here actually need is a leader who can point a way out of the catastrophe and who could help to avoid the next one. And the next one could soon be on its way. "When the rains come, there will be endless illness in the camps," says Rüdiger Ehrler, of the German aid organization German Agro Action (Welthungerhilfe, or WHH). Aid organization fear the threat of outbreaks of tuberculosis, typhoid fever, diphtheria and malaria.

Ehrler is part of the WHH's emergency response team. Almost as soon as the news broke of the devastating earthquake, the 57-year-old was already packing his bags and heading to Haiti. "Getting projects on track," is how Ehrler describes his job. He has seen camps being set up almost daily, and in a hasty and uncontrolled manner. A number of them are now in danger of flooding, which could make them hotbeds for contagious diseases.

There are better places for emergency accommodation -- such as empty warehouses belonging to well-to-do Haitians. "But one gets the impression that the Haitian administration doesn't want to step on these people's toes," Ehrler explains. "In fact, we should just be occupying them."

The relief organizations are running out of time. The past few days have already seen the first heavy rains. Haiti's rainy season usually begins at the end of March and the beginning of April. But it looks like it may be starting earlier this year.

In recent times the rainy season has been a particularly destructive force in Haiti because of the country's overexploitation of its natural resources. For years, the tropical rainforest -- which once covered 90 percent of the country and now only covers 2 percent -- has been being clear cut. The soil in Haiti cannot deal with the sudden influx of water, and mudslides and flooding are common during heavy rains.

The earthquake victims don't really expect any help from their own government. " Préval does nothing for his people," Mullin says. Which is why many of the homeless are pinning their hopes on the likes of Ehrler. Or Per Andersson.

Andersson wears a baseball cap pulled low over his forehead and the 60 year old carries a notebook in the breast pocket of his red, yellow and blue checked shirt. "I will have to leave Haiti soon," he tells his Haitian driver, as the car passes a market stall selling apples and bananas. "It's getting too civilized for me here." It's just a joke, Andersson says, grinning.

He can come across as cynical, but first and foremost, the Swede is a committed relief worker. Be it Somalia, Iraq, Liberia, Sudan and Chad, Andersson has often traveled to the people in need. "I will do this my whole life," he says. In Port-au-Prince, the engineer is mainly concerning himself with the water supply. He tests the water outlets and communicates with Haitian liaison people such as Marnity Beberly, who is homeless herself, about any problems.

"Did you hand out the purification tablets?"

"Were there enough there?"

"They will last for another week."

"Tomorrow the toilets will finally be delivered," Andersson notes.

'It Gets Better Every Day.'

An old man with a walking stick beckons to him. The old man's hip hurts, he can hardly walk and he asks for a doctor. Andersson notes down his name and telephone number. In the poverty stricken neighborhood of Cité L'Eternel, he goes past a hut where the roof awning is held on with just a couple of nails. "The wind will blow that away," Andersson says, pulling his notebook out again. "Bring sketches that show how to attach plastic sheeting," he writes in it.

Despite all the difficulties Andersson still discerns some progress. "It gets better every day," he says. Soon, 10,000 mosquito nets for Haitian families will also arrive from his Ireland-based charity, Concern Worldwide, where Andersson works as part of the charity's emergency response team.

Still, concern about the upcoming rainy season persists. Elke Leidel, who heads Concern Worldwide's team in Haiti, is hopeful that the Haitian government will soon provide some viable options for emergency shelter. She knows that the aid organizations will come in for criticism too -- even if their hands are tied because they couldn't negotiate anything that was against the will of the sovereign state. "They are sitting on our money and not doing anything -- the international media should write about that, there should be pictures of the overflowing camps," she says.

For the aid organizations this is also a fight for credibility, but mostly it remains a fight for human lives.