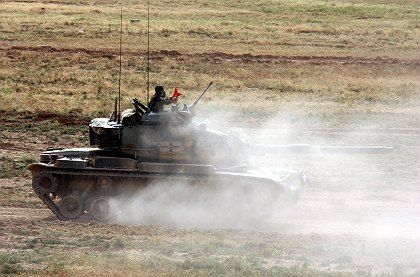 Turkish soldiers take part in a military exercise 50 km from the Iraqi border on Thursday. Tensions have been rising after cross-border incursions by Kurdish rebels, based in northern Iraq.

For several minutes every television channel in Turkey carried the same images: weeping mothers desperately throwing themselves onto flag-draped coffins, huge crowds waving flags and chanting slogans against the Kurdish separatist organization, the PKK, and officers offering their condolences to the grieving mothers.

The funerals of seven young recruits killed earlier in the week in a PKK suicide bombing at a police station in Tunceli turned into mass demonstrations against the PKK and at least indirect support for the military, which for weeks has been asking the government for permission to finally march into northern Iraq and "deal with" the PKK.

For a few hours on Wednesday afternoon, it seemed as if General Yasar Büyükanit, the chief of staff of the Turkish army, had already given Turkish troops their marching orders. Kurdish sources reported that large numbers of troops had already crossed the border into northern Iraq. Amid denials from the Turkish military, the Kurdish regional government in the northern Iraqi city of Erbil later also announced that the reports were false. According to a military spokesman, there had been no invasion. Instead, the army had only conducted a limited operation on the Iraqi side of the border to pursue "terrorists." But the campaign shows that the Turkish military is armed and ready, and is only waiting for an excuse to finally take action.

It won't take more than one or two further attacks by the PKK, such as Tuesday's attack in Tunceli or the suicide bombing in downtown Ankara two weeks ago, and Prime Minister Tayyip Erdogan will have trouble holding back the military. The people's soul is already at boiling point. A recent headline in Turkey's biggest-selling newspaper, Hürriyet, "Don't Forget our Martyrs," is hardly necessary. Emotions are already running dangerously high. Shortly after the attack on the police station, an angry mob in the western Turkish city of Zarkaya attacked two Kurdish construction workers who were wearing T-shirts depicting Kurdish singer Ahmet Kaya and were thus seen as PKK sympathizers. Only at the last minute did the police manage to rescue them and avert a lynching.

On the other hand, the Kurdish population in southeastern Turkey feels increasingly under pressure. As part of the effort to pursue and prosecute the PKK, Turkey's Kurdish minority faces increasing repression by the military and the intelligence services. It now seems like years have passed since democratic reforms and more cultural rights for Kurds were on the agenda. On Wednesday evening, three provinces along the Iraqi border were declared "security zones," a measure that is tantamount to declaring a state of emergency.

The three provinces, Hakkari, Siirt and Sirnak, also happen to be the regions where the military buildup has been taking place in recent weeks, and from which an invasion into northern Iraq would be launched.

In an effort to calm things down, especially abroad, Erdogan reiterated Thursday that a decision regarding an Iraq intervention would not be reached without the parliament, and that there are currently no plans for a special parliamentary session. In preparation for the elections on July 22, the parliament went into recess last week, which means that it would have to be reconvened. Erdogan is under heavy pressure from the European Union and the United States not to further complicate the already disastrous situation in Iraq with a Turkish invasion of the Kurdish north. In a worst-case scenario, this could even result in clashes between Turkish and US troops.

Warnings Against Entering the 'Iraqi Quagmire'

So far the Turkish military has been unable to provide a convincing explanation of what action it would in fact take against the PKK's camps in northern Iraq. If there were in an invasion, the PKK militants would disappear into the Kurdish-Iraqi population and certainly would not wait in their camps for the Turkish army. For this reason, General Büyükanit has already threatened the Kurdish regional government of Massoud Barzani that it would be seen as a supporter of the PKK and thus partly responsible for the terrorists attacks in Turkey. Whether this means that the Turkish military is threatening to occupy northern Iraq remains unclear. Many commentators warn against Turkish forces entering the "Iraqi quagmire." This, they argue, would only mean more bloodshed, without actually eliminating the PKK.

There is another possibility: That the Turkish military buildup is an effort to intimidate Barzani and convince him to cooperate with the Turks against the PKK. But Barzani has shown little inclination so far to turn over his "Kurdish friends" to the Turkish military. However, Barzani has also demonstrated in the past that he can be very flexible when dealing with his allies.

Citizens of Kirkuk, an oil-producing center in northern Iraq, will vote in an referendum at the end of the year over whether the city should become part of the Kurdish Autonomous Region or should remain under mixed Kurdish, Arab and Turkmen administration. Kirkuk is the ultimate goal for Iraqi Kurds, who hope to use the region's oil wealth to establish the financial basis for an independent Kurdish state in the future. It is precisely for this reason that the Turkish government is firmly opposed to Kirkuk becoming part of the Kurdish territory and sees itself as a kind of spokesman for the region's Turkmen minority.

If Barzani were to abandon his support for the PKK in return for Turkey rethinking its reservations on the issue of Kirkuk, it could provide a possible solution to the impasse. The saber-rattling is likely to continue for the time being, and the start of the election campaign in Turkey is hardly likely to calm things down.