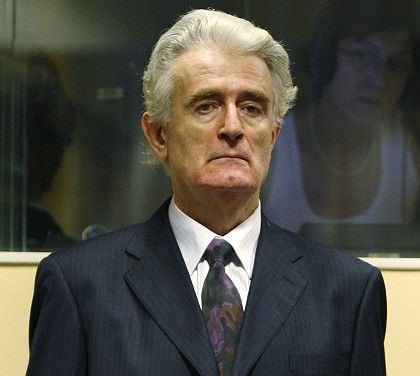 Radovan Karadzic does not believe he can get a fair trial at the war crimes tribunal in The Hague because he has already been tried and convicted in the world's media. He also insists that the US had offered him immunity from prosecution.

In a submission to the International Criminal Tribunal for the former Yugoslavia (ICTY) the former Bosnian Serb leader, who was captured in Belgrade two weeks ago after 11 years on the run, has said that there are "drastic irregularities" in his case. Karadzic was prevented from reading his statement on Thursday when he appeared before the court for the first time to face 11 charges of war crimes and crimes against humanity.

Karadzic, who was the Bosnian Serb leader during the 1992-1995 war that marked the break up of the former Yugoslavia, faces charges relating to the 43-month siege of Sarajevo that left 10,000 dead and the 1995 massacre of 8,000 Muslim boys and men at Srebrenica.

Karadzic claims that one barrier to a fair trial is the "media witch hunt which began in the Muslim media even before the beginning of the armed conflict, and which proclaimed me a war criminal at a time when the only victims were Serbs."

Karadzic also repeats his claim that the former US special envoy Richard Holbrooke had offered him immunity from the tribunal if he disappeared from public life. "Holbrooke undertook on behalf of the USA that I would not be tried before this tribunal." He says that the US diplomat, who negotiated the Dayton Peace Accords that ended the war, then reneged on that deal when the tribunal's chief prosecutor threatened to resign. According to Karadzic, Holbrooke then decided to "liquidate" him instead.

Karadzic added that he thought Holbrooke still wished for his "disappearance," and that his life was in danger, expressing fears that Holbrooke's "long arm," could extend to the courtroom.

Holbrooke has dismissed those claims as having "zero" truth. "Such a deal would have been immoral and unethical  It obviously didnt happen," he told Reuters on Thursday.