Death crept unseen through a cellar, engulfing the families that had taken refuge there. Horrific details continue to emerge from reports of alleged chemical warfare in the region of Ghouta, east of Damascus. In the village of Jarba, for example, numerous residents are said to have died in a basement from exposure to poison gas.

"The number of victims was higher because people fled into the basement," an activist from the nearby village of Jobar told SPIEGEL ONLINE. "The gas was heavy and sank down." Children are said to make up an inordinately large percentage of the dead, all of whom have no external wounds. "I have treated 50 children; all of them died," the activist said. The field hospitals have run out of atropine and cortisone, two drugs used to treat poisoning. Some of the doctors and first responders also died after coming into contact with victims, the activist added.

Syrian activists from local coordinating committees spoke on Wednesday of some 635 casualties. Chemical warheads were allegedly dropped on several villages in the Ghouta region in coordinated night bombardments. Ghouta comprises the agricultural belt surrounding the city of Damascus to the south and east. For months, its easternmost part has largely been in the hands of rebels.

What actually happened there is yet to be independently confirmed, but dozens of videos uploaded on the Internet suggest an event that killed hundreds of people without leaving any external wounds.

One video allegedly captures the attack itself. Explosions are heard across the black night sky. Other clips, apparently recorded after the fact, show gruesome images: dying children struggling to breath, people foaming at the mouth, ailing patients whose pupils have shrunk to the size of a pin. Still more pictures show row upon row of corpses, all externally unharmed.

The symptoms shown by those dying could indicate the use of the poison gas Sarin. "Considering the number of casualties and symptoms, (a chemical attack) seems likely," tweeted British weapons expert Elliot Higgins, who frequently analyzes images out of Syria to determine which weapons had been used there. If substantiated, the attack on Ghouta will have been the biggest massacre of the Syrian civil war.

The Syrian state-controlled media published a denial by the government. It did not dispute the attack on the outskirts of the capital, only the use of poison gas. Syria's state news agency Sana quoted a government spokesperson as saying that "these lies and allegations have become well-known to the Syrian government and people, and that the allegations constitute an attempt to prevent the international investigation committee from carrying out its task and to influence the committee's report (on Syria's use of chemical weapons)."

The statment refers to the team of chemical-weapons experts that is currently in Syria after being hired by the UN to investigate three instances in which poisonous gas has reportedly been deployed. The inspectors are not given free range within the country, and the Assad regime monitors all their movements. It seems inconceivable that they will be permitted to look into what has happened in Ghouta. Nabil Elaraby, the new secretary-general of the Arab League, has echoed the refrain of activists in calling on the UN experts to make their way into the bombarded areas to determine what happened.

UN Investigators in the Vicinity

According to Egypt's MENA news agency, Elaraby also said in a statement that he was surprised this deplorable crime would happen during the visit of a team of international investigators working for the United Nations. Indeed, if it is confirmed that the Syrian regime used chemical weapons on the eastern edge of Damascus while UN experts were lying in their beds in the Four Seasons hotel just a few kilometers to the west, it would be a slap in the face of the international community.

Meanwhile, supporters of the Assad regime have gone so far as to celebrate the alleged poison gas attacks on Facebook. "On the orders of President Dr. Bashar al-Assad, may Allah protect him, and on the orders of proud Syrian Alawite officers, eastern Ghouta was attacked at around 5:30 this morning, and the operation was successfully completed," it said on the page of the Harasta News Network. "We expect details of the operation in the coming hours." Immediately after this was posted, dozens of regime supporters added comments to the post celebrating the massacre. At around 10:30 a.m. local time, the page was taken offline.

Likewise, on the Facebook page of "Shooda-Alwatan," there have been reports of more than 500 people being killed in the area surrounding Damascus as part of a "cleansing operation." 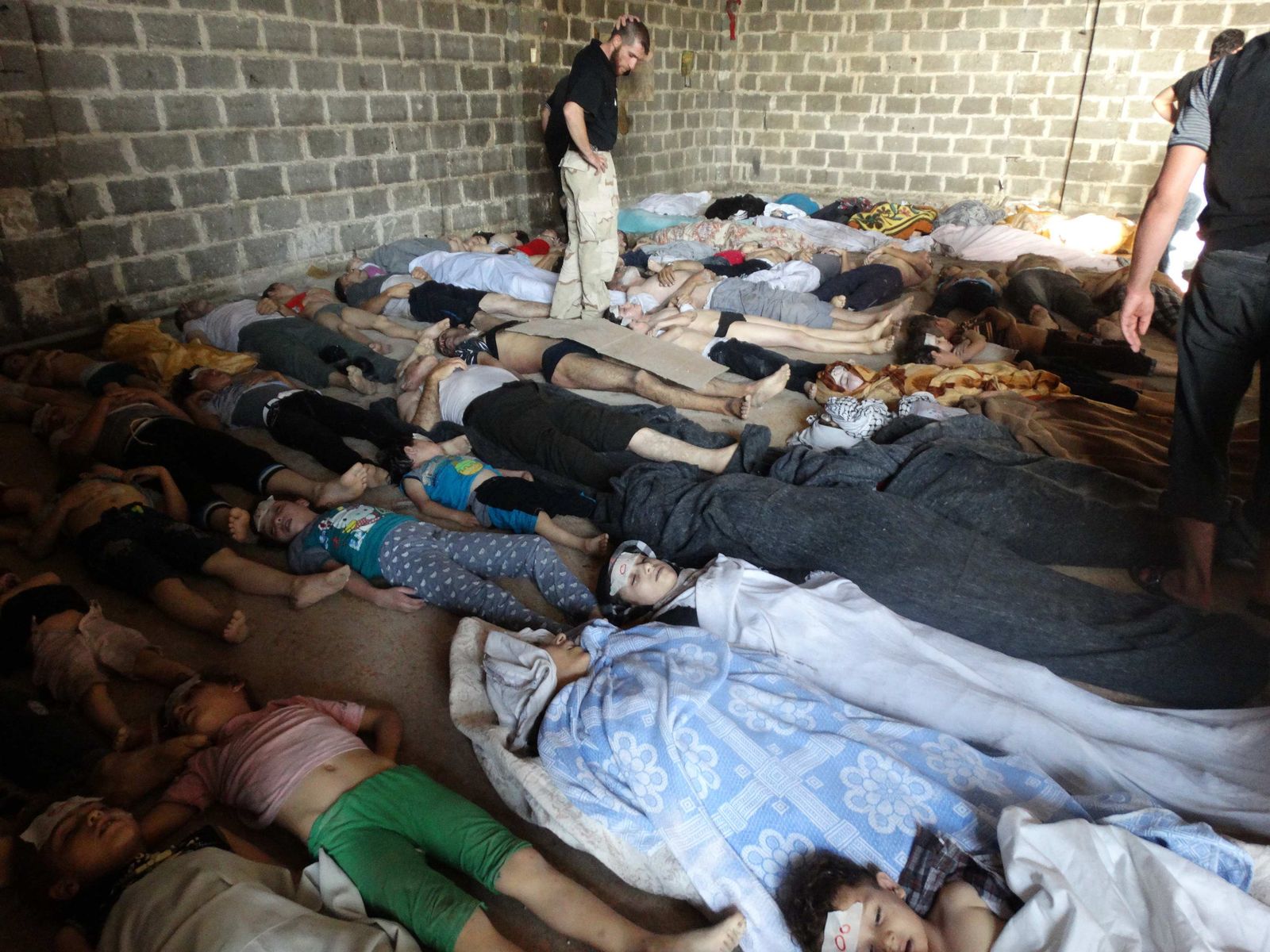 Relatives and activists inspect the bodies of people they say were killed by nerve gas in the Ghouta region, outside Damascus, on Wednesday morning.