The long trip from Mosul to Baghdad traverses a bombed highway along the Tigris River, through a wasteland in central Iraq left behind by five years of war. For Rami Kamil, 43, his wife and their children, the journey was an escape from the growing prospect of being murdered in Mosul.

Last Tuesday, at 6 a.m., the family started off in their small green Hyundai. They hid their jewelry and cash under a mountain of towels and sheets, the dowries of the two daughters. The small cross that once dangled from the rear-view mirror had been removed some time ago. Drawing attention to oneself with Christian symbols at checkpoints in Iraq is not a good idea.

Kamil and his family realized that they could no longer remain in Mosul when their fourth neighbor, a jeweler and also a Christian, was killed. Unknown assailants shot him in front of his shop, while his son, paralyzed with fear, stared out the window.

Now Kamil is sitting in his cousin's garden in Baghdad, almost too exhausted to complete a sentence and unsure what to do next. "I am a mathematics teacher," he says. "These days, who needs a Christian who teaches mathematics?"

Since the US invasion of Iraq in March 2003, Christians in Mosul have had to fear for their lives. Churches have been set on fire, and priests, doctors, engineers and businesspeople have been murdered. In March, aides found the body of Archbishop Paulos Faraj Rahho on the outskirts of the city. A new series of killings that began in late September has already claimed 18 lives.

To stop the Christians who are fleeing Mosul, their persecutors set up fake checkpoints along the roads leading out of the city. They are often robbed, beaten and even killed. In the Sadik neighborhood, masked men recently stopped a man with his child. When they saw a Christian name on his identification card, they shot the man on the spot. When the boy said the man they had just killed was his father, they shot him as well.

Church members who have not yet fled are finding flyers in their apartments with a "Warning to all Christians." "If you do not leave," the flyers read, "you will be slaughtered in three days."

These are not empty threats. At the beginning of October, 15 masked youths broke into the house of a Christian family living on the east bank of the Tigris in Mosul. First they collected the family's mobile phone, and then one of the masked intruders held a gun to the head of the eight-year-old son. The attackers shouted that everyone in the family should abandon the house and leave their belongings behind. Then they carried in large amounts of explosives. Although the neighbors had alerted the police, they did not arrive in time to save the building, which exploded in front of their eyes and those of the victimized family.

Empty Promises, from Baghdad to Berlin

About half of Mosul's 20,000 Christians have left the city since September, according to official figures released by the Ministry of Displacement and Migration in Baghdad. Since the US invasion in 2003, more than one third of a Christian population that once numbered about 800,000 has fled the country.

The ongoing persecution of Christians contradicts the promise of Prime Minister Nouri al-Maliki, who assured German Chancellor Angela Merkel during a visit to Germany in July that Christians were safe in his country. At the time, his assurances led the German government to temporarily halt the process of accepting a refugee contingent of religious minorities from Iraq. 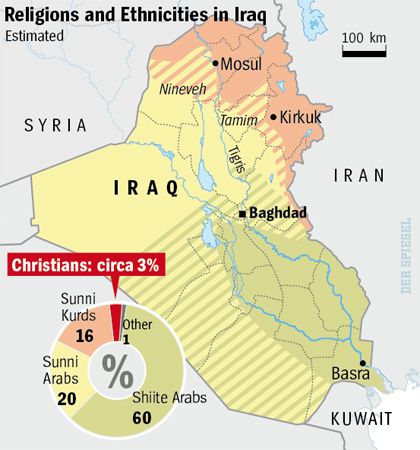 Religions and ethnicities in Iraq

Germany's two major Christian denominations are especially incensed by the German reversal. The churches have repeatedly pleaded with both Chancellor Merkel and Interior Minister Wolfgang Schäuble on behalf of the persecuted Iraqis. They have sent representatives to the region several times this year, who -- after returning from Syria, Jordan and northern Iraq -- concluded that swift help for Iraqi Christians is urgently needed.

The new chairman of the German Catholic Bishops' Conference, Robert Zollitsch, and his Protestant counterparts, like Munich Bishop Johannes Friedrich, want Merkel and the states' interior ministers to change their policies to reduce the amount of red tape refugees must endure to be accepted into Germany. "The facts are all very well known," complains Thomas Prieto Peral, an official with the Evangelical Lutheran Church in Bavaria.

But even those refugees who have already made it to Germany can face obstacles. In the western city of Essen, a full 3,000 kilometers (1,863 miles) from Mosul, lives a family named Jalal who left their home on the Tigris in the summer of 2007. Armed men had broken into the Jalals' house, berated them for being Christians and shot the mother in front of her seven kids.

The surviving members of the family had the good fortune to make it to Damascus, where the German embassy, as an exception, helped them enter Germany. Despite the great solidarity of officials in Essen and the energetic assistance of the Catholic aid organization Caritas, the Jalals were not spared a humiliating examination process. 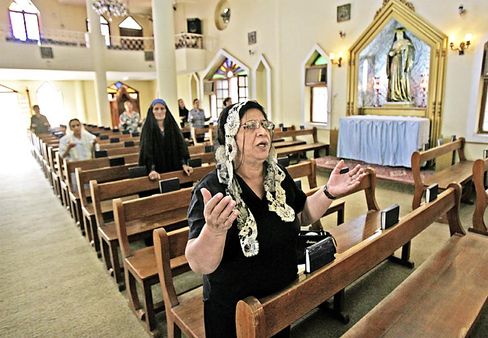 Iraqi Christians pray in Baghdad in October, 2008. Thousands have abandoned their homes in Mosul recently to seek refuge in churches and with relatives in neighboring towns.

Fifteen-year-old Naseem and his grandmother spent four hours in a strict interrogation with an "individual case decision-maker" from Germany's Federal Office of Migration and Refugees in the northwestern city of Bielefeld. The teenager's fingerprints were taken, and then he was photographed and questioned with undisguised hostility. In the end, the grandmother and her grandson were officially recognized as refugees.

It is precisely this sort of treatment that the churches want to prevent. They've proposed a resettlement solution with a streamlined acceptance procedure ending in a permanent residency permit. But before approving the plan, German politicians insist that Iraqi Christians should have no reasonable prospects in other countries that accept Iraqi refugees, like Syria and Jordan. A return to Iraq must also be out of the question.

But no agreement has been reached. The German states' rigid stance on refugees is only gradually starting to soften. Since last spring, officials in Lower Saxony have considered a plan to house close to 1,000 refugees in centers in Friedland and Unna-Massen for "initial intake with integration courses." The immigration centers have stood empty. Now, after state parliamentary elections in Bavaria, Joachim Herrmann, the state's interior minister, has shown a willingness to talk with church representatives.

An important Iraqi Christian who once agreed with Maliki in opposing the Christian exodus from Iraq now appears to have changed his mind. He is Cardinal Emmanuel III Delli, the patriarch of the Chaldean Catholic Church in Iraq. He recently visited the Bishops' Synod in Rome. He also, apparently, is planning a trip to Berlin. He's told the German pope, Benedict XVI, what he intends to say to Chancellor Merkel. The latest pogroms in Mosul are "evidence of the life-threatening situation of Christians in Iraq," he told Benedict.

The persecution affects a community with roots in Mesopotamia stretching back almost 2,000 years. This community has been consistently loyal to the Iraqi state, founded in 1921 under a British mandate. Christians served Iraqi kings as ministers and bankers; they served the rebels of the 1960s as military doctors and professors; and they served the former dictator Saddam Hussein as government bureaucrats and helicopter pilots. No one had to ask them twice in 2003 when it came time to build a new Iraq. But because the Christians, once were courted by Saddam, were always among Iraq's most well-educated and affluent citizens, they were also targets of resentment.

The ongoing power struggle over resources and territories that started with the US invasion now threatens to crush the shrinking community of Christians. In Baghdad, thousands of Christians have fled al-Qaida's (Sunni) terrorist gangs. They've fled the southern city of Basra, which is primarily Shiite, in response to pressure from criminal gangs and religious fanatics. And now the animosity toward Christians has erupted in the largely Kurdish north, where tens of thousands had earlier fled from the south.

It's a silent war in the ethnically and religiously mixed northern provinces. Kurds claim the city of Kirkuk and large parts of Tamim and Nineveh provinces. Muslim Arabs, many of them settled there by Saddam Hussein, oppose the Kurds. Christians are caught in between, along with Yazidi and Shabak minorities.

Elections to Iraq's provincial parliaments are scheduled for next spring. But in late September, the Baghdad parliament revoked a law guaranteeing minorities a fixed number of seats. The attacks by gangs began when Christians in Mosul protested the government move. But no one knows for sure what motivates the attackers.

When Rami Kamil reached the capital last Tuesday, having fled Mosul, his already dwindling confidence in the government had vanished. A few days earlier Prime Minister Maliki had promised to send additional police brigades to the north to protect Christians. But Kamil saw no evidence of police on the road from Mosul. "All I saw were columns of refugees heading to the east or south," he said.