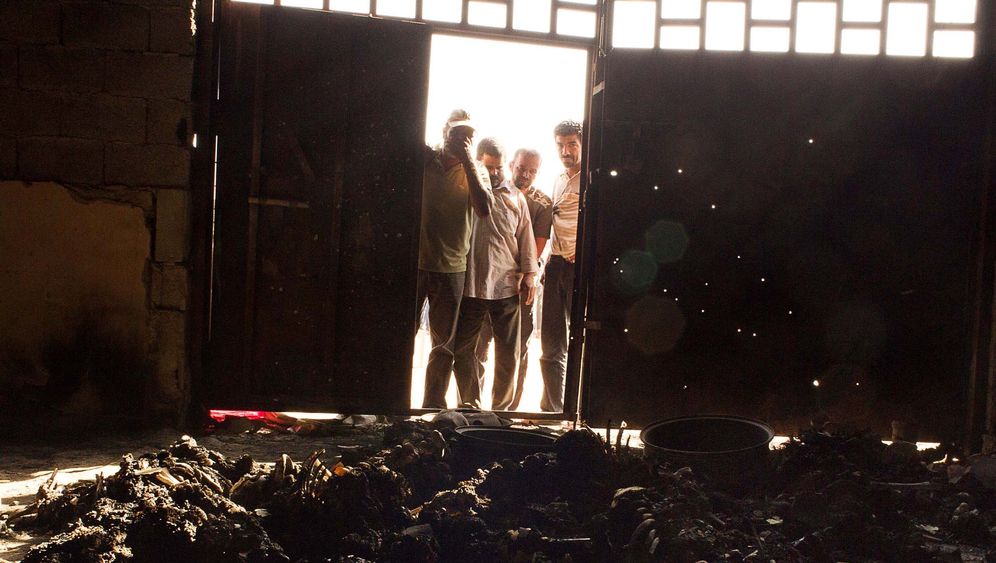 The scene of the massacre of Khellet Ferjan is a nondescript compound surrounded by a high wall near the Libyan capital Tripoli. Before the war, it was used by the local agricultural cooperative. But now it is a place of horror.

In a large warehouse lie around 50 corpses, completely burned except for their skeletons. Next to the warehouse, under a corrugated iron roof, lies a tied-up man who had been shot in the face. Another dead man lies a few steps away. Yet another corpse is behind a low wall. A fourth body lies on a property directly next to the compound. The stench is indescribable.

Abdulatif Rafaii, 42, is standing in the compound's yard. A thin, quiet and thoughtful man, he lives in a house about 50 meters (160 feet) away. He points to two newly dug, empty pits that will be used as mass graves. The larger of the two graves is about 13 meters long, 5 meters wide and 3 meters deep. The smaller is about half the size. The property itself is about 150 meter by 150 meters in size. It is not clear what else may be concealed here.

These deaths were by no means the only ones, Rafaii claims. He explains that, since the beginning of the Libyan uprising in February, Gadhafi's people repeatedly brought opponents of the regime, demonstrators and rioters here to be tortured, killed and buried. He says they also used the adjacent property. Activists from Human Rights Watch have reported similar events in other parts of Tripoli, basing their conclusions on reports from survivors and eyewitnesses; but the group has not presented concrete evidence.

Driven into the Warehouse

The barracks of the 32nd Brigade, Moammar Gadhafi's elite force led by his son Khamis, is located about 800 meters from the Khellet Ferjan compound. Rebels captured the barracks on Friday. Gadhafi's troops put up such a bitter fight that many rebels suspected that the dictator himself was holed up in the barracks.

On the other side of the yard is an area with warehouses. Rafaii says that the regime supposedly used them to house mercenaries from sub-Saharan Africa. There are three prisoner-transport vans in the compound, of a kind used by the police rather than the military. One of them is a pick-up truck made by the company O'Gara Hess & Eisenhardt with extremely narrow single cells made of sheet metal. Not far away there are two bulldozers parked in front of empty pits that have obviously been freshly dug.

Rafaii relates how the people here were killed. He says the killings took place at about 8 p.m. last Tuesday, around the time that Muslims break their fast during Ramadan. That afternoon, rebels had captured Gadhafi's enormous Bab al-Aziziya compound in Tripoli, the symbol of the regime's power. It must have already been clear to Gadhafi's supporters that the war was lost. Perhaps they thought it was time to cover their tracks.

According to Rafaii, Gadhafi's soldiers drove people into the large warehouse. They then threw hand grenades into the back of the building. The surviving prisoners ran toward the open door of the warehouse, where Gadhafi's men shot most of them, he says. Many of the charred skeletons lie next to and in front of the door.

Some prisoners managed to escape, Rafaii says. One got over the wall and into the neighboring property, where he was shot. Two men even managed to make it to his house, where they hid. Rafaii's version of events explains why there are two unburned bodies outside the warehouse. The corpse with the bound limbs remains a mystery, however. The man could hardly have escaped from the warehouse while tied up.

After the massacre, the soldiers threw car tires into the warehouse and set fire to them, says Rafaii. It seems plausible: Tires burn for a long time, which would explain why the ash surrounding the skeletons was still warm on Saturday evening. It could also explain why only the bones of the dead were left, which would not have happened with a short gasoline-fueled fire.

An alternative explanation, however, would be that the rebels massacred their prisoners on Friday evening after the battle and tried to pin the crime on Gadhafi's forces. But on Saturday evening, one of the bodies lying outside was swarming with thousands of tiny maggots, which would be impossible if the man had only been killed the day before.

Another neighbor, an elderly man named Ali Boukhatwa, said he had not heard about any other murders, but added that he lives 700 meters away. The soldiers of the Khamis Brigade often played loud revolutionary songs, he said, adding that the area's residents avoided walking past the barracks. The Khamis Brigade reportedly moved into the area shortly before the uprising and forced some of the neighboring residents out of their homes. Those houses now stand empty.

Ali Boukhatwa says there were initially 150 prisoners here. There are now about 50 corpses, and he does not know where the others are. Shortly after the start of the uprising, the soldiers raised the walls around the compound, he says, and installed a new red steel gate that extends across the whole width of the entrance.

One survivor, Moftar Abdallah from the town of Zlitan, insists that he was not a rebel. He also said he did not know about any other massacres. He claimed to have been held in Khellet Ferjan for several days, which suggests that the compound was not used exclusively for immediate executions.

There are a number of inconsistencies in the explanations about the Khellet Ferjan massacre. The four dead men outside the warehouse whose corpses were not burned appear to have been powerfully built, dark-skinned men, as far as can be judged after days in the Libyan heat. It is possible that they were soldiers who wanted to desert or did not want to be involved in the massacre. Ali Boukhatwa confirmed this version of events and also said that the soldiers had been tortured.

The only thing that is certain is that around 50 people were murdered in Khellet Ferjan -- a fact that is terrible enough.

The death toll may rise once people start excavating the ground in the compound to see what is concealed beneath. So far, no one has started digging.