On the surface, it looked like any other drill core from the ocean floor. Its shimmering grayish-green surface was both slippery and grainy at the same time. But the sample only revealed its exciting secret when the geologists on board the "Bavenit," a drilling ship, lowered the pressure in the steel tube and held a lit match to the upper end. Suddenly a yellowish-red flame began licking from the slick material.

"As astonishing phenomenon," noted the scientists from the Guangzhou Marine Geological Survey. So astonishing, in fact, that when their ship pulled into the harbor at Shenzen on June 12 of this year, the scientists were all smiles.

Shengxiong Yang and Nengyou Wu, the two expedition leaders, stand an excellent chance of going down in the history of their country as heroes. The material they pulled from the muddy ocean floor of the South China Sea has the potential to satisfy the energy needs of China and its fast-growing economy.

The flames in the drill core were coming from methane hydrate, a material first discovered in the 1970s. Its unique characteristic is that it is a seemingly frozen and yet flammable material.

In the West, this potential fuel from the ocean floor has for the most part been the stuff of fantasy. But it's a different story in Asia. The People's Republic of China is investing millions to study this massive source of energy. The same holds true for India, South Korea and Taiwan, all nations that are on a fast track to surpassing the West as economic powers.

These countries -- especially China, which produces one third of the world's steel and aluminum and half of its cement -- are playing a key role at the United Nations Climate Change Conference, currently being attended by roughly 10,000 delegates on the Indonesian island of Bali.

The needs of these emerging economies continue to rise. Each year, China increases its power consumption by an amount equal to France's total annual power production. By the end of 2007, the country, with its population of 1.3 billion, will have surpassed the United States as the world's No. 1 producer of greenhouse gases.

It is one of the ironies of the Kyoto Protocol that China is still treated as a developing country, which means that, legally speaking at least, it is not obligated to pay any heed to climate protection issues. However, China and the world's other budding economic superpowers will no longer enjoy that status under a follow-up agreement to Kyoto, which the delegates in Bali plan to initiate.

The Chinese government is pursuing a double strategy. On the one hand, it expresses great concern over climate change. Observers were astonished to note that Prime Minister Wen Jiabao used the terms "environment," "pollution" and "environmental protection" 48 times in his address to the National Peoples Congress this year. China, he said, will not repeat the mistake of "polluting first and cleaning up later."

At the same time, however, China is energetically seeking new ways to satisfy its voracious demand for more energy. And Chinese officials are pinning their hopes on methane hydrate as one of these ways. 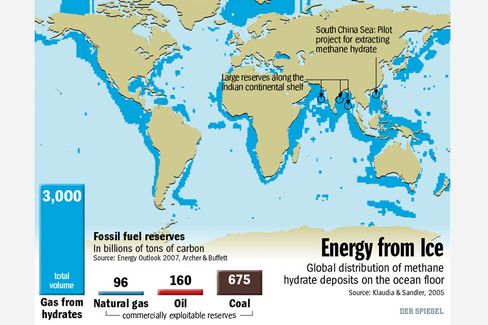 Methane, trapped in an icy cage of water molecules, occurs in permafrost and, in even greater quantities, beneath the ocean floor. It forms only under specific pressure and temperature conditions. These conditions are especially prevalent in the ocean along the continental shelves, as well as in the deeper waters of semi-enclosed seas (see graphic).

World reserves of the frozen gas are enormous. Geologists estimate that significantly more hydrocarbons are bound in the form of methane hydrate than in all known reserves of coal, natural gas and oil combined. "There is simply so much of it that it cannot be ignored," says leading expert Gerhard Bohrman of the Research Center for Ocean Margins (RCOM) in the northern German city of Bremen.

A few months ago, Chinese Premier Wen Jiabao held the material in his hand -- or rather, in a metal ice bucket with flames shooting from the top. He was visiting an Australian research center at the time, but now he can just as easily watch the same spectacle unfold in Chinese research laboratories.

The Chinese researchers found the methane hydrate, also known as crystal gas, because of its molecular structure, in a layer of sediment 15 to 20 meters (50 to 65 feet) thick off the Chinese coast. "It was embedded in clay and silt ," says John Roberts, whose firm Geotek provided the technical equipment for the drilling expedition.

This is the sort of information natural gas companies like to hear. The porosity of this sediment mix is well suited to drilling for the gas. "The gas hydrate has never found in this form before," Roberts explains. It suddenly seems conceivable that production using conventional techniques could work.

One possible method would involve the use of drilling tubes that would conduct heated fluid into the cold reservoirs. This would dissolve the icy cage encasing the methane. The next step would be to capture the gas through a second opening.

These are the kinds of prospects that have inspired others to emulate the Chinese researchers' success. Japan has built the world's largest research drilling ship, the Chikyu, primarily to study methane hydrate. India has invested €200 million to launch a major national program -- and has already reported successes.

Can a Potential Curse Be Transformed into a Blessing?

Indian researchers discovered a 132-meter (433-foot) thick layer of methane hydrate in the Krishna-Godavari Basin. "One of the thickest that's ever been found in the world," says Malcolm Lall, the director of the Indian gas hydrate program. The team has also been successful in the Andaman Islands, were they discovered, 600 meters (984 feet) beneath the ocean floor, a layer of frozen methane embedded in ash sediments from prehistoric volcanic eruptions. "This too is a first," says Lall.

But many scientists see the flames licking out of samples in Indian and Chinese laboratories as a warning sign. They fear that one day the methane from the ocean floor will heat up the world's climate to a far greater extent than coal, oil and natural gas do today.

This is precisely what scientists at the Institute for Marine Research (GEOMAR) based in the northern German seaport of Kiel want to avert. They hope to be able to transform a potential curse into a blessing before it's too late. They envision a method whereby the flammable gas would be extracted from the sediment with the help of carbon dioxide.

"The carbon dioxide could be obtained from the exhaust gases of coal power plants, for instance," says Klaus Wallmann, the direct of a research project known as SUGAR, which was recently formed to study the issue. What he proposes sounds almost too good to be true: producing fuel while sequestering greenhouse gas deep beneath the ocean floor -- eliminating energy bottlenecks while simultaneously putting the brakes on global warming.

Wallmann and his colleagues base their theories on a reaction scientists noticed more than a decade ago. When a certain amount of pressure is applied to the cage-like crystal structure, carbon dioxide can penetrate the layer of ice, at which point it displaces the methane. Then a new cage of frozen water molecules forms around the carbon dioxide. "This behavior has already been demonstrated in laboratory experiments," says Wallmann.

He is also impressed by the ratio at which the gases are exchanged. For each dissolved molecule of methane, up to five molecules of carbon dioxide disappear into the ice cage.

In addition, says Wallmann, the ice encases the CO2 in a more stable manner than it does the methane. "I cannot imagine a better way to sequester carbon dioxide," Wallmann explains, adding: "We are pursuing this approach with great interest." German industrial companies like BASF, Ruhrgas and E.on are also interested, and are donating money and expertise to promote the study of the sequestration technique. "Politicians are more difficult to convince that this is a good idea," says Wallmann.

According to Wallmann, research into the use of renewable energies to avert global warming is considered sexy, whereas very few politicians are interested in sequestration. "It's seen as a fig leaf to save the fossil fuel age from its demise," says Wallmann, sighing. But, he adds, mankind will eventually have no other choice but to sequester greenhouse gases.

Wallmann fears that the topic is being ignored altogether at the Bali conference, which he considers naïve and irresponsible. "What's happening in China and India takes the climate negotiations into the realm of the absurd." Indeed, officials in Delhi and Beijing expect their geologists to produce results that will enable them to begin the systematic mining of methane hydrate within the next decade.

For their part, the German researchers hope to have fully refined their method by then. Wallmann envisions, in the not-too-distant future, tankers filled with CO2 heading out to sea to pump their climate-damaging cargo into the depths.

Naturally, even Wallmann knows that this is a highly optimistic vision. This helps explain the lack of enthusiasm among the Chinese and Indian scientists he encounters at conferences for a technology still a long way from completion. "They are afraid that the West wants to prevent them from rapid extraction of methane hydrate."