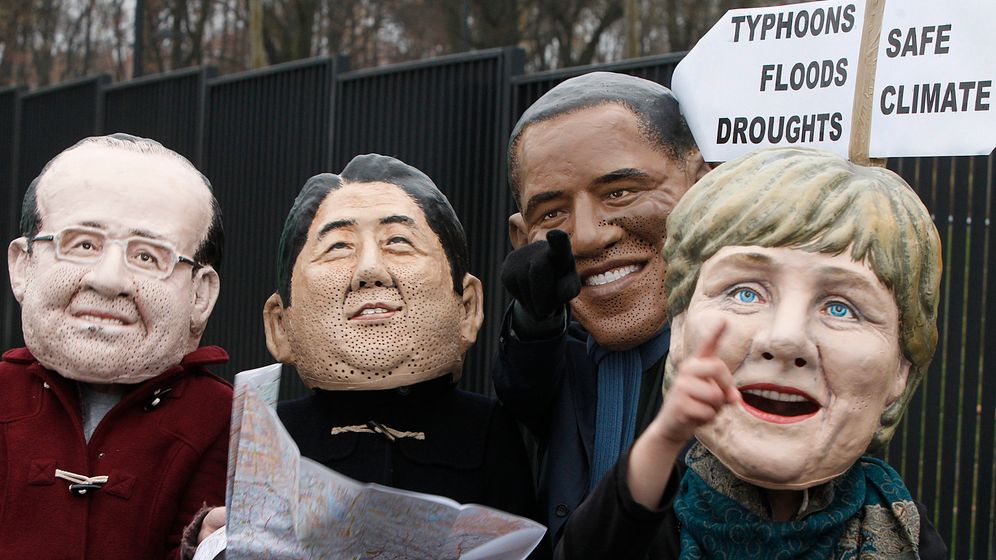 Typhoon Haiyan whipped into the Philippines on Nov. 7, just as the 19th United Nations Climate Change Conference was getting underway in Warsaw. With storms getting more ferocious due to human-induced climate change, a typhoon that was both the strongest storm to hit land in human history and the Philippines' deadliest storm ever quickly became the poster event for climate tragedies.

The conference, however, got off to a rocky start on Nov. 11. Japan announced that instead of a 25 percent reduction in emissions by 2020, they would increase emissions by 3 percent. The Global Carbon Project said emissions from fossil fuels and cement production reached a record high in 2012, with a 2.2 percent increase from 2011.

By the second-to-last day of the conference many of those in organizations like Greenpeace, WWF and Oxfam walked out in protest of the talks' lack of ambition. The final agreement fell short of providing significant financing for stopping climate change and delegates were unable to agree on a solid road map for how countries can prepare for a legally-binding agreement in 2015, when they meet again in Paris.

In one important area, however, the United Nations Framework Convention on Climate Change (UNFCCC) did make some progress: by instituting a mechanism for richer countries to help poorer countries cope with the challenges of climate change. As Yeb Sano, the delegate from the Philippines, argued in the wake of the storm, poor countries are disproportionately affected by temperature rise and other effects of climate change. This mechanism hopes to alleviate that.

The initiative, which will be known as the Warsaw International Mechanism for Loss and Damage, will commit countries to sharing knowledge and expertise, collecting and distributing data, broadening international dialogue, providing technological support and, most controversially, giving financial support to poorer countries damaged by the changing climate. The question of which countries will be responsible for these payments, and how payments will take place, has the potential to raise some thorny questions in the years to come, but, even so, the mechanism is an important commitment to dealing with the current consequences of climate change, on the ground.

"What we're finding all over the world is that when people are having trouble with the weather, it affects food and income," said Koko Warner, an expert on environmental migration based at the United Nations University. She has spent time during the last two years studying how differing levels of rainfall affect human migration and hunger. The answer: a lot.

Climate change doesn't just mean stronger typhoons. It also means sea-level rise, desertification, unpredictability of rain for crops, drought and other problems that tend to result in fewer news reports than a crushing storm like Haiyan.

Many of the resulting losses are difficult to categorize and count in terms of money. It's the emotional burden of leaving a family grave behind, of moving from ancestral lands, of kids giving up the ability to go to school. But global financial losses, even just those tabulated from major disasters, have also been rising through the last few decades. Annual estimates are now at just under $200 billion (€146 billion), according to a report released by the World Bank during the conference. That's up from about $50 billion each year through the 1980s.

Burden on the Poor

Compared to those numbers, countries are spending small amounts to mitigate and slow climate change. Back at the Copenhagen talks in 2009, the developed countries made a promise to provide $100 billion in climate aid by 2020. Since then, the global financial crisis rendered that goal more illusory, with countries giving less during difficult economic times. Though the annual total is difficult to assess due to poor transparency, between $7.6 billion and $16.3 billion was likely spent on climate aid this year, according to a report released by Oxfam during the conference.

"Typhoon Haiyan has brought into sharp focus how climate change is intensifying the severity of extreme weather events, which hurts the poor the most," said Jim Yong Kim, World Bank Group President. "While the immediate relief effort must be front and center of our attention today, such tragic events show that the world can no longer afford to put off action to slow greenhouse emissions, and help countries prepare for a world of greater climate and disaster risks."

No Country is Innocent

The Warsaw International Mechanism will, starting next year, commit countries to evening out this disparity. The vague wording of the agreement, however, has created a debate about about how and when rich, energy-intensive countries should pay for damages in more seriously at-risk poor countries -- and who is responsible for what environmental damage.

When it comes to pollution, there is no simple calculus and no country is innocent. With all of the focus on the hurricane in the Philippines this year, few have noted the ongoing investment the country is making in highly polluting coal-fired power plants. Output of electricity from coal, usually the dirtier version called lignite, is expected to increase more than six-fold by 2035 in the country, according to the Asia-Pacific Economic Cooperation organization. Coal will make up 70 percent of the national electricity generation in the Philippines by 2035, while natural gas will fill out much of the rest, at 16 percent.

Although China is now the top emitter of greenhouse gases -- leading the United States, European Union, India and Russia -- the US is responsible for cumulatively releasing the most emissions since 1850. This led the United State - fearing it must assume liability for its historical pollution -- to resist the new initiative.

The US and the EU wanted the new mechanism to be positioned "under" UNFCCC's "framework for adaptation," an existing initiative to "strengthen action" on adaptation to climate change in developing countries "through international cooperation." Part of the argument for keeping the new Warsaw Mechanism under adaptation is that all three areas -- mitigation, adaptation, loss and damages -- must work together towards solutions. Developing countries, however, wanted to make it clear that the issue isn't just about "adaptation" to climate change, because they were asking to be compensated for events to which no nation can adapt, like rising sea levels in low-lying coastal regions.

"One word, 'under', will forever be the difference between two paths we take," said Filipino negotiator Yeb Sano during the long and passionate discussions before the agreement, referring to the positioning of the mechanism as part of the framework. The end result was a compromise: Although the new mechanism doesn't exist under the adaptation framework in an institutional sense, the word "under" was left in the text. There will also be a review of the status of loss and damage in 2016.

The agreement was disappointing to many poorer countries because of its lack of clear commitment. "The details of the mechanism are far behind what developing countries wanted," said Harmeling. "It was the bare minimum that was acceptable. It is now the task to build this up over the next few years. It is definitely a step forward, but with a lot of caveats."

Negotiating "Who Is To Live"

The conference in Warsaw also marked the first time that every Least Developed Country (LDC), the poorest countries in the world, has submitted adaptation plans for climate change. Many of these countries are already feeling the effects of climate change and need to plan for the, at times drastic, changes that are expected to take place.

"It started as learning by doing," said Thinley Namgyel, chief of the climate change division of the National Environment Commission of Bhutan, a least developed country. "In the beginning no one knew how to do adaptation. Now we are addressing the longer term."

Many countries and cities around the world are busy preparing plans and enacting changes to get ready for a different world. New York City, for example, has been undergoing a series of major adaptive changes that have mostly happened under the radar. But while cities like New York can afford this, poor countries cannot. Vietnam, for instance, has already seen a sea-level rise of 0.2 meters. The consequences of a rise in sea levels of just 0.8 meters more would mean inundation of 39 percent of the Mekong Delta as well as 20 percent of Ho Chi Minh City.

As Lucille Sering, the secretary of the Philippine delegation put it, "We are negotiating who is to live and who is to die."