They did their utmost to make the situation appear as dramatic as possible, so that they could rattle their sabers and issue one threat after another. Only recently, US President George W. Bush said that Iran's "aggressive pursuit of a military nuclear program" raised the specter of a "World War III." Vice President Dick Cheney said that the West must use "all means necessary" to deter Tehran from its "plans to develop the bomb." And the sooner the US launches military strikes against Iran's nuclear facilities "the better," said Norman Podhoretz, foreign policy advisor to Rudy Giuliani, the frontrunner for the Republican presidential nomination.

John Bolton, the US Ambassador the United Nations until 2006, called any attempts to qualify the threat of a nuclear holocaust triggered by Tehran an irresponsible "policy of appeasement." Indeed, if Bolton had had his way, UN chief weapons inspector and Nobel Peace Prize winner Mohammed ElBaradei would have been fired immediately for supposedly being too soft on Iran. Bolton even called ElBaradei "an apologist for the mullah regime."

But now all that has changed. Last Monday, the imminent threat scenarios the White House and its rabble-rousing friends had been painting for months collapsed like a house of cards. The new information, so damaging to the Bush administration's case, came from a surprising source -- the CIA and the country's 15 other intelligence agencies -- and it defused concerns over an Iranian nuclear bomb, at least for the foreseeable future.

"It's the most dramatic shift in an intelligence assessment I have ever seen," says Bruce Riedel, a Middle East expert with the Brookings Institution and a government bureaucrat for 30 years. "The report represents a 180-degree reversal."

Most of all, however, the report is likely to trigger an earthquake on the foreign policy front. It would undoubtedly stand in the way of the White House's push for tightening international sanctions against Tehran, while at the same time dramatically boosting Iran's standing in the Middle East as a power defiant of the West. Finally, when George W. Bush leaves the White House in 13 months, it will likely lead to direct negotiations between Washington and Tehran.

The intelligence report has also caused a sensation domestically and triggered a flood of questions. When was the president first made aware of the information behind the new intelligence report? Did he irresponsibly exaggerate the risks, echoing his administration's faulty justification for entering the Iraq war? Is it possible that he simply lied to the American people? What does this mean for Bush and his final months in office -- and for those presidential candidates in both parties who have been the least critical of his horror scenarios?

To answer these questions, it is worth examining the key findings of the "National Intelligence Estimate," which hit Washington -- and other places -- like a bomb. According to the report:

* "We judge with high confidence that in fall 2003, Tehran halted its nuclear weapons program."

With these new assessments, the CIA and other US intelligence agencies are not only contradicting their own, alarmist pronouncements from 2005, but are also essentially confirming, based on their own sources, the results of the inspections of Iran's nuclear program by ElBaradei and inspectors with his International Atomic Energy Agency (IAEA) -- precisely the conclusions for which Bolton wanted to see ElBaradei ousted. According to both assessments -- from the CIA and the IAEA -- there are currently no indications that Tehran is pursuing a nuclear weapons program.

By issuing these findings, neither the IAEA nor the American intelligence agencies are sounding the all-clear on Iran. They warn that it is difficult to draw the line between a civilian and a military program, and that there is still the risk that Iran could simply throw the switch and, after achieving further successes in uranium enrichment, declare itself a "virtual nuclear power."

Although ElBaradei welcomed the Iranian authorities' improved cooperation during direct IAEA inspections, he still finds fault with Tehran for not disclosing any information voluntarily. As long as this does not change, he is unlikely to support the lifting of UN sanctions, which the Iranian president demanded as soon as the US intelligence report was released.

"This is a declaration of victory for the Iranian nation against the world," Iranian President Mahmoud Ahmadinejad said triumphantly, "the American slanderers have failed with their strategy!" He knew full well that UN Security Council members China and Russia could now block every new round of sanctions.

For his part, Bush seemed lost as he tried to interpret the intelligence report at the White House. He struggled to find the right words, even more than usual, and he seemed distracted and dejected. "He looked as if he'd spent the night throwing chairs around the Situation Room," a reporter at Time wrote. The president had little of substance to add to the issue. Nothing had really changed, he said, adding cryptically: "I understand what it's about, and I see the problems clearly in front of me. I will use the report to continue to bring together the international community for peace."

At least Bush admitted that Director of National Intelligence Mike McConnell told him in August that there was new information on the Iranian nuclear program. But, he added, "he didnt tell me what the information was." 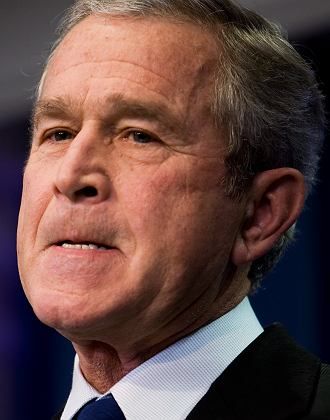 US President George W. Bush: "He didn't tell me what the information was."

On Oct. 17, the president publicly repeated his apocalyptic scenario of a "World War III" that he said the Iranian nuclear program could trigger. If Bush hadn't asked for more information on a matter of such grave importance, said respected Democratic Senator Joe Biden, he must be "one of the most incompetent presidents in modern American history." Biden went on to threaten the president with impeachment proceedings if he bombs Iran without congressional approval.

The intelligence report has reshuffled the cards for the Democratic Party's lineup of presidential candidates. It has damaged Hillary Clinton, who, for fear of seeming soft on the "war on terror," has distanced herself surprisingly little from Bush. She has since acknowledged that she made a mistake when she voted for the Iraq adventure five years ago, and she has been largely forgiven for that. But the fact that she has, for the most part, supported the current administration's extremely hard line against Iran and voted in favor of Bush's move to declare Tehran's Revolutionary Guards a terrorist organization because of its "participation in the nuclear weapons program" could seriously damage her campaign.

Adversary Barack Obama, who Clinton repeatedly accuses of lacking foreign policy experience, can at least claim that he was against the Iraq war from the start and favored tough, but direct talks with Tehran. Obama has moved ahead of Clinton in the opinion polls leading up to the party's primary vote in Iowa. If he wins Iowa in January, his campaign, which many had already written off, could regain strength and eliminate Clinton's lead.

An Unassailable Report or Palace Coup?

The intelligence report has brought down an entire world for the hawks among the Republicans, and they are already working out their versions of the story -- and about how they have been stabbed in the back. But when it comes to facts, the report is apparently unassailable.

The CIA's conclusions are based on documents agents obtained in the summer of 2006. In the documents, Iranian military officials who had been involved in the nuclear program complain bitterly over its termination. The transcripts of wiretapped telephone conversations have silenced the critics who initially claimed that the Iranian documents must have been planted.

"The evidentiary situation must be outstanding," says CIA expert Riedel. "Otherwise all 16 services wouldn't be this sure" -- especially not after the intelligence disasters surrounding the Iraq war. Nothing cast the quality of US espionage in quite as devastating a light as the statements of then-CIA Director George Tenet, who claimed self-righteously -- and incorrectly -- in late 2002 that the presence of weapons of mass destruction in Iraq was a "slam dunk."

For Republican hawks, the mere fact that the National Intelligence Estimate has been made public is nothing short of scandalous. Bolton, in an interview with SPIEGEL, even calls it a "quasi-coup." "It's politics disguised as intelligence." According to Bolton, the intelligence agencies are dissatisfied with the Bush administration. There are some who believe that their goal in issuing the report, possibly with the approval of Secretary of Defense and former CIA Director Robert Gates, was to make war with Iran impossible.

Even a sober Middle East expert like Ray Takeyh of the Council on Foreign Relations sees Bush's authority greatly undermined. "We assume that government agencies have defied the White House," he says. In a complete role reversal, says Takeyh, the intelligence agencies and generals are now dictating policy to the president. "This suggests that Bush doesn't have much say anymore." The president, who travels to Israel in January, may in fact be so weakened that he will no longer be able to convince Israel's political leadership to agree to the compromises needed to achieve real progress in the region. 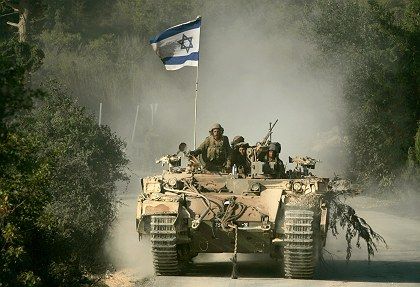 An Israeli tank returning to northern Israel from southern Lebanon in 2006: "Now we're on our own."

In no other country besides the United States was the intelligence report received with as much consternation as in Israel. The tabloid Yedioth Ahronoth called it "painful" and a "blow beneath the belt." Israel, wrote the liberal daily Haaretz, is now like "a panic-stricken rabbit." The country's politicians downplayed their outrage, at least publicly. Prime Minister Ehud Olmert even managed to interpret the report as a call to tighten international sanctions.

Defense Minister Ehud Barak, for his part, expressed doubts over the quality of the US intelligence. "It is apparently true that in 2003 Iran stopped pursuing its military nuclear program for a certain period of time, Barak said. "But in our estimation, since then it is apparently continuing with its program to produce a nuclear weapon."

Behind the scenes, Jerusalem is furious with Washington. The Israelis feel upstaged by the CIA, and they remain convinced that their intelligence on Tehran's plans is still the best. They also continue to assume that Iran could have nuclear weapons by late 2009. "We had hoped that the Americans would take care of this with a military strike against the Iranian facilities," a close associate of the prime minister told SPIEGEL. "Now we're on our own."