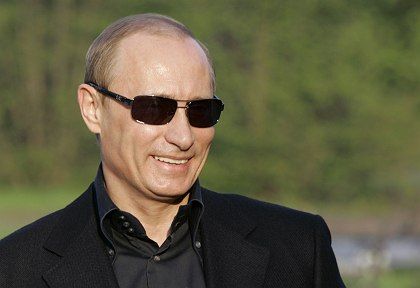 Russian President Vladimir Putin in sunny Samara. Opposition leaders have been prevented from going to the city to protest during the EU-Russia summit.

Summer has arrived right on time for the European Union-Russia summit on in the resort town of Samara on Friday. Under clear blue skies, the citizens of this city on the Volga River are sweltering and basking in the sun. Children in swimsuits splash around in the fountain on Osipenko Street; students doze in the heat. Naturally the EU-Russia summit is the talk of the town. Yura pushes her sunglasses up to her forehead, gives the thumbs up and tries out her smattering of German: "Merkel -- Gut!"

Yura hasnt heard anything about the "March of Dissenters" -- a demonstration organized by the opposition coalition "The Other Russia." "What are they so dissatisfied about?" she asks. "If I wasnt satisfied with something, I would just go somewhere else."

Like most people in Samara, Yura is honored that the European visitors are coming to her city, and knows nothing about the planned protests, which are due to start at this very fountain late Friday afternoon. That is if anyone actually turns up.

The march was given official approval late last week, following pressure from Germany, the current rotating president of the EU. But despite the fact that the city authorities have given the green light for the protest, the repression of Other Russia is in full swing. Over the past 10 days, 15 members of the opposition have been arrested; and on Friday morning another 13, including the coalition's leader, chess champion Garry Kasparov, were arrested and prevented from traveling to Samara. Human rights activists are describing this as a deliberate campaign against the organizers of the march.

'A Targeted and Co-Ordinated Action'

Anastasia Kurt-Adzhiye, spokeswoman for The Other Russia, was arrested last Sunday. The petite 19-year-old was accused of carrying grenades and a knife in her small black handbag. "I showed them the permit from the mayor, which allows our demonstration," she said. Rubbish, the police told her -- the signature must have been forged.

The mayor had to interrupt his holiday to clear up the matter. But that didnt stop the security forces from forging ahead with other arrests. On Monday Yuri Chervinchuk was arrested, supposedly as part of an anti-terror operation, while Michail Merkushin was taken into custody because he looked like a wanted criminal.

"It really looks as if this is a targeted and co-ordinated action by the security apparatus," says Sergey Shimovolos of the Moscow-Helsinki Group. The human rights organization has sent him to Samara as an observer. "Everything possible is being done to prevent this legally approved demonstration," he says.

Russian security forces seem to be pursuing a new strategy. In April massive contingents of police forcefully broke up opposition demonstrations in Moscow and St. Petersburg. Now, because of huge interest in the EU-Russia summit -- and the presence of the international media -- the Kremlin wants to avoid images of thuggish police beating up protesters. There is no sign of the feared OMON riot police on the streets of Samara. Instead individual militiamen are patrolling the city, decked out in parade uniform for the summit.

But the opposition hasnt been left in peace. The police have switched tactics -- now they're intimidating and immobilizing the activists in the run up to the summit. They started carrying out preventive arrests on Thursday, just as German Chancellor Angela Merkel and President Vladimir Putin were making their way to Samara.

Looking to Merkel for hope

Leading members of Other Russia were arrested at the Samara train station. Denis Bilunov, an advisor to Putin opponent Garry Kasparov, had only just arrived in the city when he was taken away, accused of carrying counterfeit money. He was only released again later on Thursday night. "They wanted to stop me from doing my work," he says. Bilunov was supposed to be preparing a meeting between Kasparov and Samara's mayor on Friday morning.

Kasparov himself was detained on Friday morning at 8.30 a.m. as he was checking in for his flight. "The Moscow-Samara flight must have been have pretty empty this morning," says Julia Galamina, a spokesperson for the opposition group. In all the Moscow police prevented 13 people from traveling to Samara on Friday morning. Those arrested include Eduard Limonov, the head of the banned National Bolshevik Party.

Another member of the same party was sentenced to six months in prison this week, for injuring his probation officer, according to the authorities. In 2004 he had taken part in the occupation of Russian government buildings and had been given a suspended sentence.

Kurt-Adzhiye, of the Other Russia, is at the Osipenko Street fountain, and she is worried about her team. "Two other friends have gone missing since they were arrested for putting up posters," she says.

Her phone rings again and it's more bad news: In Moscow, Sergei Udasltsov, the leader of the Vanguard of Red Youth has been arrested. "Right at the Kasan train station. He wanted to come to Samara."

She is now placing her hopes in the European Union. After all, it was thanks to European influence that the march was allowed at all -- and for the first time. Previous marches had always been banned by the Russian authorities. "Hopefully Angela Merkel will bring up the subject," Kurt-Adzhiye says. "Maybe she will get an answer from Putin about what is happening in our country. He won't answer us at all."

On Friday afternoon, Merkel answered their wish. Appearing at a press conference and standing next to Putin, she said: "I'm saying very openly I wish that those who this afternoon want to protest and express their opinion will be able to do so. I'm somewhat concerned that people had difficulties getting here, but perhaps a possible demonstration can still take place.''