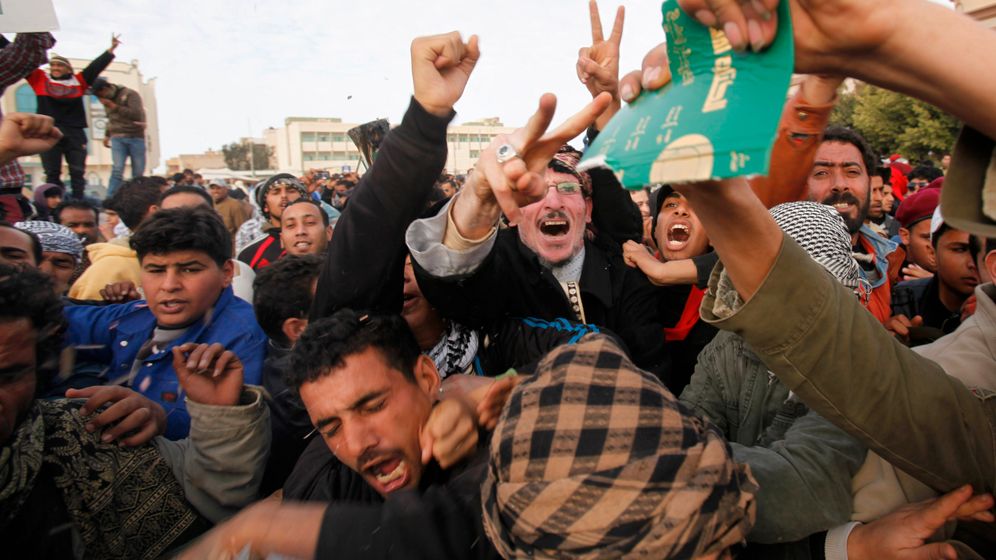 It is an exodus of construction workers, tradespeople and laborers. With their shovels on their backs, wheelbarrows, Hilti drills, and grinders, they are crossing the border by the hundreds and thousands.

Holding their plastic bags close, most of them wear long Jellabiya garments with an anorak jacket thrown on top. One is carrying a mattress on his shoulders, two others are lugging a tool chest over the stony ground. The lucky ones came in a Toyota van, twice its normal height with bundles of suitcases, floormats, sacks and mattresses tied on top. They come from Bengazi, Al-Bayda, and Tobruk, and they only want to go home, back to the cities in Egypt that they once left for Libya.

The border checkpoint at Sallum is hardly recognizable as a crossing any more. On the Libyan side, all the border guards have disappeared. On the Egyptian side, the gate is wide open. The Egyptian military has orders to treat the refugees as homecomers. There is pushing, honking, and shouting. Every few minutes an ambulance makes it way through the flood of people with its blue lights flashing. Inside are injured Libyans being brought to the hospital in Sallum.

'We Are Fair Game'

The border has disappeared. Just a few meters beyond the checkpoint, Egyptian cell phones can be reactivated, and families in Alexandria and Cairo can be reached. The guards only look fleetingly at the refugees' papers. There are just too many people.

Much of eastern Libya may be free, but it is a terrifying place for Egyptian migrant workers. They heard on Libyan radio and TV yesterday that all soldiers and security forces were called on to shoot every Egyptian. "We are fair game," says Hossein, a 22-year-old painter with bundles under both arms. He comes from El-Baida and has sworn never to return. On Friday, he says, he was shot at from a helicopter. "It was in front of a large mosque," he says. "There were 200 of us, maybe 250 people."

Moammar Gadhafi's propaganda machine was quick to assign blame for the revolt. "Forces from neighboring countries," were behind the rebellion. That was a clear reference to Egyptian migrants like Hossein.

"First came the men from the People's Committee," said Hossein, who moved to Libya one-and-a-half years ago. "They fired around wildly." On Saturday, helicopters were firing at people in the city of Al-Baida, he said. Someone heard an explosion from a rocket-propelled grenade. Hossein was told that mercenaries walked through the streets carrying the anti-tank weapons on their shoulders. Hundreds of people were killed, he said.

On Monday, they had tried for the first time to head east for the border with Egypt. "We were already on the street when low-flying aircraft came," he said. "We turned around. They didn't shoot, but I was scared." Then they tried again and reached the road east. It was a good road -- there was no oncoming traffic.

The mercenaries appeared to be from Chad, where Gadhafi recruited his militias during the Libyan civil war, said Hossein.

Mohammed Salah, a 25-year-old construction worker from Cairo, says :"All of a sudden, the prison gates were open in Bengazi. That caused chaos. Thugs were on the street, and they had weapons. Then the police stations burned down. It wasn't us. But we dealt with them." And the mercenaries were dealt with, too, at least in Bengazi. "The were arrested and shot," Salah says.

About 80 percent of the army in Bengazi, according to him, joined forces with the protestors.

Behind him, an old man sits by the side of the road, his bundle next to him and behind him vast openness, garbage and stones covering nothingness.

Egyptian TV reports have claimed that about one and half million Egyptians are working in Libya. The true figure is likely to be 100,000. Egypt may be exaggerating the figure to create a political atmosphere for a military intervention.

Sommul is a run-down border town on a bay without boats. A British military cemetery is its only attraction. The Nazi general Rommel won a victory here over Montgomery's tank units. The street along the border winds its way up to a high plateau. Below are crowds of refugees. The Red Crescent has set up two tent camps. In the next few days, special trains are supposed to take people from the main station in Sallum to Alexandria and Cairo.

'Egyptians and Libyans Are One People'

In Mersa Matruh, an Egyptian seaside resort some 220 kilometers to the east, Salafis, devout Muslims, have collected money for their relatives in Libya. Photo-copied papers taped to the side of their pickup trucks read: "Egyptians and Libyans are one people." The sentence is true, at least for those with Bedouin roots in the area.

Two buses of doctors' aid groups are waiting for permission to drive to Bengazi. "I can already smell freedom," says Atenzah Ramadan, a cardiologist from Liverpool. His chief doctor in Liverpool allowed him to take some vacation days and make the trip. "I simply couldn't work anymore," he says. "I had to leave. In my whole life I have never cried so much as I have in the last three days, believe me."

He has a neatly trimmed white beard. His colleague, Abubakkir el-Badri, is a pediatrician in Liverpool, but has family in Tripoli and Bengazi. He says: "Gadhafi took these young and completely desperate refugees out of the camps and turned them into mercenaries. That's what my people tell me. Reportedly, for $12,000. That is all a result of the agreement between Italy and Libya."

Italian Prime Minister Silvio Berlusconi and Gadhafi signed a friendship agreement in 2009. It was about Libyan gas and joint patrols in order to stop refugees from reaching the Italian island of Lampedusa.

The Egyptian local radio stations were already talking on Wednesday morning about an "Arab Intifada," and reported that the Libyan interior minister has also stepped down, saying: "I stand on the side of the people." The cell phone network in Bengazi has reportedly been repaired by the protestors. 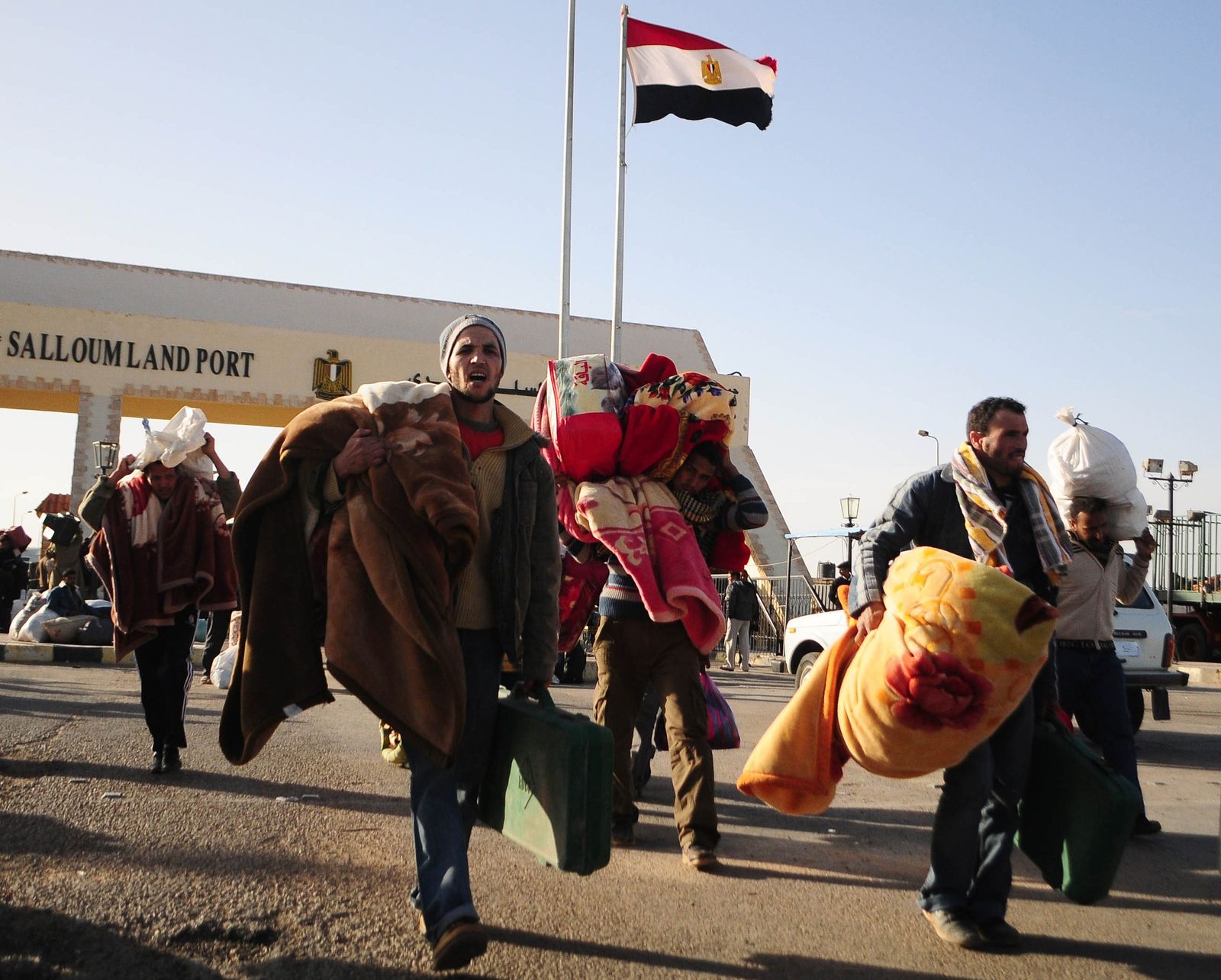 Egyptians carrying their belongings across the border into Egypt at Salloum. 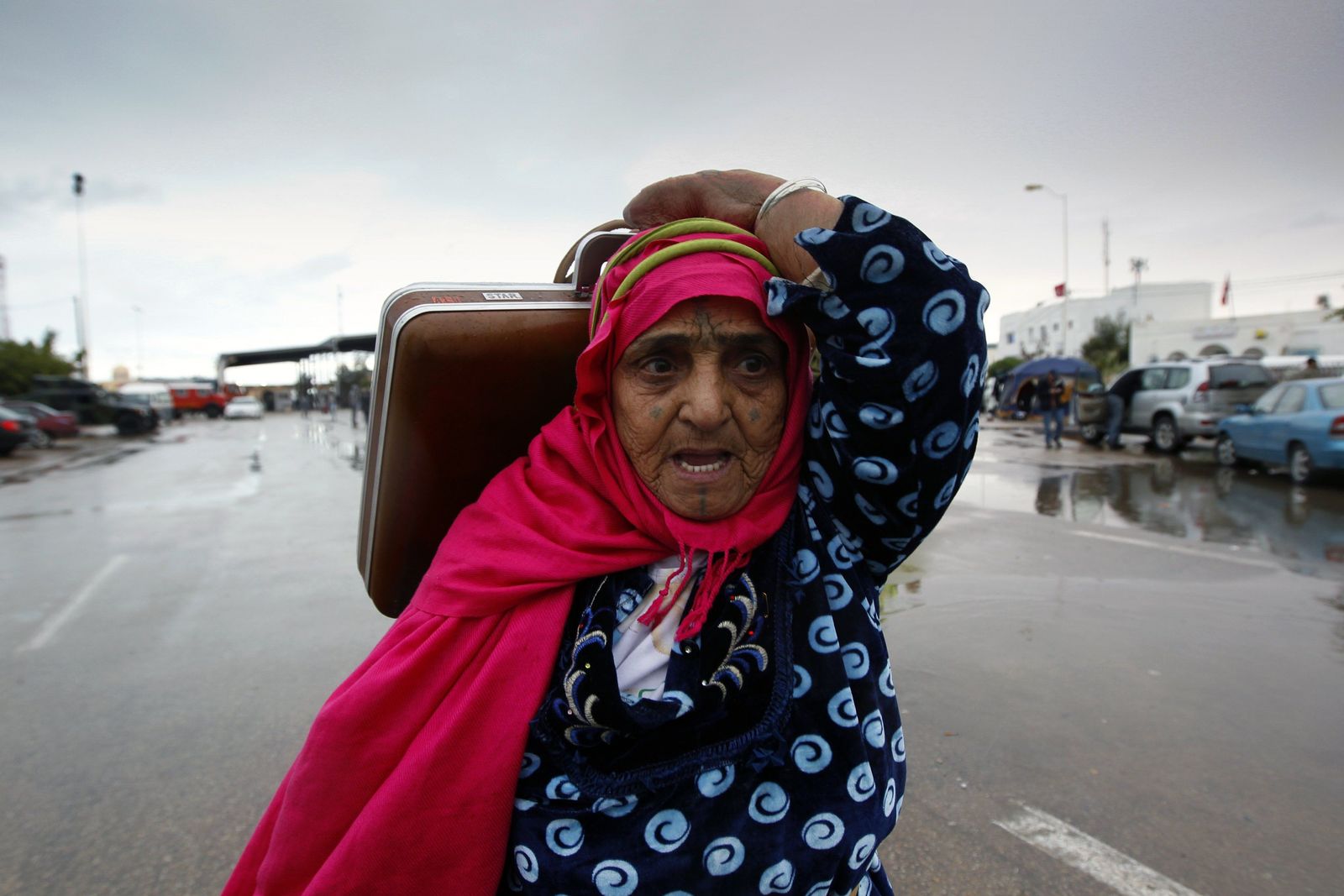 A Tunisian woman carries her belongings as she crosses into Tunisia at the Ras Jdir border crossing.