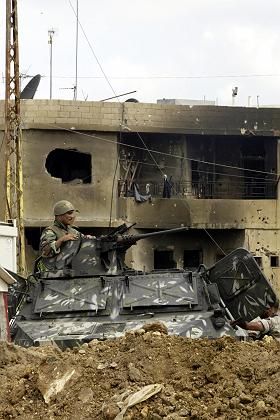 A Lebanese soldier stands guard at the edge of the Palestinian refugee camp Nahr al-Bared.

"During the next 48 hours, we will eradicate them," says the elite Lebanese soldier, lying behind a freshly raised mound of red earth. "They," of course, are the militants of the radical Palestinian group Fatah Islam. And the effort to eradicate them has virtually destroyed the Palestinian refugee camp Nahr al-Bared where they are holed up.

The ground is strewn with the empty casings of high-caliber bullets; the soot-blackened ruins of the camp north of the Lebanese seaport of Tripoli stand about 200 meters (650 feet) away. Fatah Islam snipers on the roofs take aim at the Lebanese rangers who have dug in east of the camp. "I hope they will attack us soon. Then we'll strike back and finish them off," says the officer, who wants only to be called Spiro.

Spiro's merciless prediction is certainly not improbable. A massacre seems inevitable on the fifth day of the stand-off between fundamentalist Muslim militants and the Lebanese military. The militia, which has entrenched itself in Nahr al-Bared, is surrounded by a large contingent of soldiers -- including at least 700 elite troops. Even as a cease-fire appears to be holding on Thursday, with only sporadic gunfire, they are waiting for the decisive battle. It's a battle the Fatah Islam militants cannot win and don't intend to survive: Spokesmen for the group, which Western intelligence agencies consider close to al-Qaida, have warned that it will fight to the end, and take as many soldiers down with it as possible.

The Lebanese side seems just as unwilling to back down. Lebanese Prime Minister Fuad Saniora said in a television address on Thursday that his military remains committed to eliminating Fatah Islam. Calling the group a terrorist organization, he said it was "attempting to ride on the suffering and the struggle of the Palestinian people." He continued: "We will work to root out and strike at terrorism but we will embrace and protect our brothers in the camps."

Just how many radicals are still alive and willing to fight is unclear. A high-ranking officer said on Wednesday that more than 750 had barricaded themselves in the camp. The Fatah Islam militants are just as well equipped and trained as the military, the officer says. "But they are prepared to commit suicide, and that could be described as their advantage."

The militia and the military have been engaged in heavy fighting since Sunday, leaving about 70 militiamen and soldiers dead, according to news agency reports. At least 20 civilians are also said to have been killed during the skirmishes before a cease-fire negotiated on Tuesday enabled many of the 31,000 inhabitants of the densely populated Nahr al-Bared camp to flee.

The Lebanese government accuses the militia of having planned and executed terrorist attacks, with the Nahr al-Bared camp serving as a hideout and command center. About 400,000 Palestinian refugees, forced by the wars in the Middle East to leave their homes, live in 12 camps inside Lebanon -- camps to which the Lebanese police have no access due to a 40-year-old agreement with the Palestinians.

'They Are Prepared to Commit Suicide'

The terrain on the edge of the camp where Spiro's soldiers have dug in was still in the hands of the Fatah Islam militants on Tuesday. The rangers moved in at dawn on Wednesday, flattening the reeds that grew there and raising protective mounds of earth among the cypress trees. Ranger Rommel can't say how many people he has killed in the past few days. "It must have been a lot," says the 27-year-old, whose parents named him after the German Field Marshal who commanded the Nazi Afrikakorps. "At first it was a shock to be in a real battle after all the training," Rommel says. Later, he adds, it was like being in a movie. "A drunk state in which you don't care whether you're shooting at children, the elderly or militants."

It looks like the movie will play again soon, he says: "We have precise indications that our position will be a target for suicide attacks." The information he has indicates that the attackers will be old women.

It's the first time since the fighting started that Spiros's and Rommel's units have had a chance to rest. The men smoke, eat fresh plums and make bawdy jokes about each other's girlfriends. One soldier hands out plastic bags with pita bread, tins of tuna and tomatoes. Most answer questions in flawless English, having received, they say, part of their training in the United States. Some of them are even citizens of both the US and Lebanon.

The men have repeatedly raided the camp during the past 72 hours and are markedly shaken by the house-to-house fighting they have experienced. "These militants are not religious people; they're sadists," says Husam, whose voice is hoarse from shouting over the noise of battle. "They decapitated some of our people." He and his fellow soldiers found Egyptian, Sudanese and Bangladeshi passports on the bodies of dead Fatah Islam militants, he says. "Most of them are not from here. They're fanatics from outside who have rallied here."

Nothing Good to Say about Fatah Islam

A few kilometers to the south, a caravan of refugees is leaving the camp behind, moving slowly. Everyone's ID is checked to ensure no militants escape by mingling with the refugees. From neighbors shot while fetching bread to one farmer's economic ruin -- caused by a grenade that killed eleven of his cows -- the refugees have gone through days of horror. Now they are fleeing into a nearby Palestinian camp, where an uncertain future awaits them. Even though it was the Lebanese military that opened fire on the camp, nobody has anything good to say about Fatah Islam.

Mahmud Darwish, an IT student who lives in the camp, also says that the problems were started by foreigners who began moving into the camp one or two years ago. The men, he says, married into Palestinian families and spent lavishly to buy apartments in Nahr al-Bared. A pharmacist reports that the fundamentalist Muslims disclosed their identity increasingly openly in recent months. "They were impossible to overlook, riding mopeds with their long beards and dressed in ostentatiously chaste clothing," he says. As time went by, the fundamentalists became increasingly self-confident. "When a man cursed in their presence, they surrounded and scolded him," the pharmacist says.

The Palestinians didn't just stand idly by as Fatah Islam moved in. The Palestinian Liberation Organization (PLO) in Nahr al-Bared tried for months to isolate the fundamentalists. The current intervention by the Lebanese army is -- over and above the suffering it has caused the refugees inside the camp -- unwelcome by the Palestinian powers that be.

After the cease-fire went into effect on Tuesday, the PLO announced it wants to get rid of the radicals itself. The PLO's authority in the camp would be substantially weakened were the Lebanese military to find success where they have not. Most observers, though, have little faith that the PLO would have much chance of victory.

Meanwhile, the Lebanese forces are considering storming the camp as the Islamic militants have refused an ultimatum to surrender. Some Islamists have allegedly tried to escape -- the Lebanese military announced on Thursday that it had destroyed two small boats full of militants trying to escape into the nearby Mediterranean Sea.

His troops were the ones who opened fire on the bus -- before retrieving three corpses and several injured from the wreck. "Terrible, but that's just what war is like."