When Benny Raz comes home in the evening and gets out of his car, his neighbors turn their backs on him and disappear into their houses. Ras is wearing a short black jacket and jeans. His head looks like a coarsely modeled sculpture, with his protruding cheekbones and eyes set deeply in their sockets. He is 55, and he says: "I have lost all of my friends here."

Raz, an Israeli, sits down on an old sofa in his living room and lights an Imperial, the cigarette brand favored by Palestinians. His wife enters the room and serves Nescafe with cookies. She says: "Just to make one thing clear, Benni: You don't speak for me."

Raz is even a stranger in his own home.

The place he calls home is the town of Karnei Shomron, a Jewish settlement with a population of 6,400 people in the middle of the Palestinian West Bank, the region that Israel captured in the 1967 Six-Day War. A total of 275,000 Israelis live in more than 120 settlements in the West Bank, not including East Jerusalem.

When Raz moved to Karnei Shomron with his family in the mid-1990s, he supported Israel's radical right-wing Moledet Party, which wants to see the Palestinians in the West Bank resettled in Arab countries.

But Raz was eventually overcome by doubts. He saw how Palestinian women, with their babies, were forced to wait for hours at military checkpoints, and how the Israeli army would detain seriously ill Palestinians for long periods of time. Over the years, Raz arrived at what would seem to be an almost banal realization, but one that was astonishing for an Israeli right-wing nationalist: "that we cannot rule another people."

Raz is no peace activist, and he is everything but naïve, nor does he need any lessons in patriotism. He has served in a combat unit with the Israeli army, worked as an agent for the Israeli intelligence agency, the Mossad, in Lebanon, and as a sky marshal for the Israeli national airline, El Al. In 1975, he was on the plane that was attacked by terrorists with bazookas at Orly Airport in Paris. More than 100 Israelis were saved, partly as a result of his courageous intervention.

Avoiding a Repeat of Gaza

Now, more than 30 years later, Raz has the feeling, once again, of having to protect his fellow Israelis from harm. But this time there are 80,000 people at stake, which is the number of settlers living east of the security wall in the West Bank. Former Prime Minister Ariel Sharon justified the wall's construction in 2003 by claiming that it was meant to protect Israel against Palestinian attacks. However, he also managed to expand Israeli territory. In doing so, Sharon brought most of the Jewish settlers under Israeli control. Nevertheless, the wall left 77 settlements on the other side -- the Palestinian side.

When Raz saw how chaotic the process of forcibly clearing settlements in the Gaza Strip was and how deeply it divided his country, he decided to get involved. Because he was convinced that Israel would eventually clear the majority of settlements in the West Bank, he approached members of parliament from the right-wing Likud Party and proposed a new law, under which the state would compensate settlers willing to leave their houses voluntarily so that they could build new homes in Israel's core territory. The reasoning behind his proposal was that once the withdrawal was officially scheduled, the settlers would be forced to sell their old houses at well below market value, if they could even sell them at all.

The right-wing politicians were not interested in Raz's idea. From their standpoint, a voluntary evacuation would be a sign of weakness. But Ras managed to find allies within the left. Together with members of parliament from the left-leaning Merez Party and the Labor Party, he founded the Bait Echad, or "One Home," movement. It has been an unexpected success.

Leading politicians within the Israeli coalition government have since started to back Raz's legislative initiative. Defense Minister Ehud Barak now supports it, as does Foreign Minister Tzipi Livni, currently the leading candidate to succeed Prime Minister Ehud Olmert. The principle of withdrawal in return for compensation is also part of the peace plan Olmert has proposed to the Palestinians.

Deputy Prime Minister Haim Ramon believes that, by passing the legislation, the government could prove to the Palestinians and the international community that it is serious about a two-state solution. At the same time, says Ramon, it would strengthen Israel's claim to keep its settlements west of the wall.

In those areas, Jerusalem is still approving the construction of new houses and apartment buildings, a policy that even meets with the pro-Israeli US government's disapproval. As US President George W. Bush has assured Palestinian President Mahmoud Abbas, a Palestinian state should not look like "Swiss cheese." 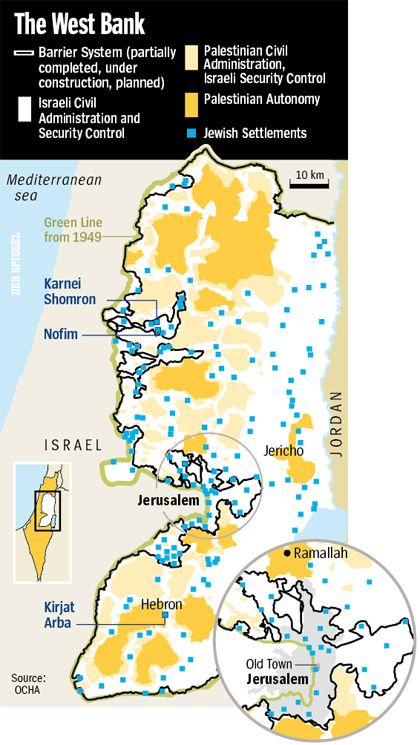 But even if the peace process with the Palestinians fails, a majority of Israelis is opposed to remaining in the Palestinian areas. Olmert's Kadima Party has already announced that Israel plans to withdraw from most of the settlements in the West Bank -- if not after negotiations with the Palestinian, then unilaterally, following the model of the 2005 withdrawal from the Gaza Strip.

Moti Morel, a public relations professional, is in charge of advertising for Bait Echad. He has advised politicians of every stripe, including Likud party leader Benjamin Netanyahu. "Unlike in Gaza, where the settlers were evacuated at the last minute, we are planning the withdrawal from the West Bank in advance," says Morel. He says that 5,000 settlers have already registered for the Bait Echad program. The organization's goal, according to Morel, is to register so many people that politicians will be forced to accept the law.

Morel is not squeamish when it comes to choosing his methods. In one campaign, he had passport-like green folding cards imprinted with the seal of the Palestinian Autonomous Authority and sent them to all settlers east of the border wall. The message was clear: Sooner or later, your settlements will be cleared. If you stay, you will become citizens of the State of Palestine.

The chances of the plan succeeding are good, says Morel. Many of the Jews living in the West Bank are not religious zealots who believe that it is God's will that they settle the biblical Erez Israel, or "Land of Israel." According to a survey Morel commissioned, 53 percent of the settlers did not move to the West Bank for ideological reasons, but because building land there was cheaper than in Tel Aviv, for example. The problem, says Benni Ras, is that the religious settlers are putting everyone else under pressure. The settlers' leaders claim that the renegades have almost no support. In reality, however, they see Bait Echad as a grave threat, says Zwi Kazower, the chairman of the community council of Kiryat Arba near Hebron: "If the law were passed, more than a few settlers would leave this place."

It is shortly before 9 p.m. on a Sunday evening. Benny Raz has made a trip to the neighboring settlement of Nofim, home to a little more than 100 families. In the house of the Friedman family, he meets with Avshalom Vilan, a member of the Israeli parliament, the Knesset, who is with the left-leaning Merez Party. Together with the host Kobi Friedman, a local businessman, they have organized an informational meeting for Bait Echad. The telephone rings as they are about to walk over to the community center. A friend on the other line advises them to cancel the event, warning that hecklers plan to disrupt the meeting.

The Friedmans decide to have the meeting at their house. Few people have the nerve to come, with a dozen ultimately attending. Vilan, the Knesset member, explains the compensation law. He says: "Either we reach an agreement with the Palestinians, in which case you will have to leave. Or a third intifada breaks out, and then you'll be the first targets." Friedman, the host, adds: "We moved here because that's what the Israeli government wanted. Now the conditions have changed, so the government has to help us leave again."

A young man with a shaved head says: "I didn't move here for ideological reasons. I'm interested in only one thing: How fast can I get out of here if your proposal becomes law?" Another man agrees, adding: "Since the wall was built, living here has been like living in the ghetto."

At the end of the meeting, a man with a snow-white beard says: "We are settlers to defend Israel. Look at what's happening in Gaza. We left, and now they're shooting rockets at us. We cannot give the Arabs any land."

This uncompromising and futile approach is one way at looking at things, and it just how Raz used to feel. His campaign is an attempt to find a way out.