Working as a reporter in the Xinjiang region of China is an experience both exhilarating and depressing. From the vast expanse of the Taklamakan Desert to the majestic peaks of the Pamir range, the panoramas are overwhelming, the landscapes straight out of a painting. Fully two hours are needed to fly across China's largest province from east to west. On the ground, it can take days.

But few are interested in talking -- neither the man sitting next to you on the airplane nor the family sharing your compartment on the high-speed train. After a while, you grow hesitant about addressing anyone at all. Every encounter could have consequences: unpleasant ones for the reporter, but potentially dreadful ones for his counterpart.

Living in Xinjiang, after all, is dangerous. Those who talk to the wrong people or take the risk of speaking with foreigners, those who read the wrong books, visit the wrong websites or express the wrong thoughts: They all risk being interrogated or locked up that same night. Hundreds of thousands of people, and likely more than a million, have suffered that fate. Beijing has set up a surveillance state in the homeland of the Muslim Uighurs of a kind that the world has never seen before.

People across the globe have been broadly aware of the situation for years. But in the last few weeks, the New York Times and an international collective of investigative journalists have published details that had remained secret until now. They provide an in-depth look at how the camp system was conceived and how the state put it into practice. The documents include procedures for answering the questions of children whose parents are locked away in a camp. They include an instruction manual for running hundreds of penal and re-education camps, which Beijing euphemistically refers to as "vocational training centers." It makes it clear that it is of utmost importance to "prevent escapes," and states that inmates must be strictly monitored "while they are at class, dining, using the toilet, washing, receiving medical care or meeting with family."

Of all the disturbing aspects of the Chinese regime, it is what it is doing in Xinjiang that is the most disturbing. It reveals the true nature of the Chinese Communist Party (CCP) and may shape modern China's global image more lastingly than any event since the brutal crushing of the Tiananmen Square protests in 1989. It remains doubtful whether Beijing understands the intensity of the shock that the recent reports have triggered around the world.

The problem now facing the West is that of coming up with an adequate response to these hundreds of thousands of violations of basic human rights. Of breaking the silence about the fate of the Uighurs, a silence that is still there despite the recent revelations. Of determining what can actually be done for Muslims in China beyond empty statements of solidarity, given the tight political and economic relations the United States and Europe have with Beijing.

A Conflict over Values

The West finds itself involved in a number of conflicts with the burgeoning global power, from the U.S. trade war to the pro-democracy movement in Hong Kong, from Beijing's industrial policies to its influence along the New Silk Road, from the bickering over telecommunications company Huawei to the territorial disputes in the South China Sea. Some of these clashes are the inevitable consequence of an emerging China stepping on the toes of an insecure West that is worried that its days of supremacy may be fading. On most issues, there are interests and arguments on both side, but compromise is fundamentally possible.

Xinjiang is different. There are, to be sure, interests at stake here as well: the Chinese population's legitimate need for security along with the equally legitimate concerns of the many countries to which thousands of oppressed Uighurs have fled. But at its core, the Xinjiang conflict is one over values. The degree of discrimination combined with the severity with which Beijing is persecuting its Muslim minority, represents a violation of fundamental values that are not up for negotiation. Rather, they are anchored in the Universal Declaration of Human Rights, which China also signed when it joined the United Nations -- and which Beijing isn't shy about invoking when it feels the rights of Chinese citizens have been violated abroad.

This conflict of values has been exacerbated by the technological aspect. In Xinjiang, China is relying on digital tools for mass surveillance to an unprecedented degree. DNA-profiling, compulsory installation of spying apps, algorithm-driven facial recognition, identifying citizens based on ethnic characteristics: Beijing is essentially using all of the technical tools at its disposal to keep the Uighurs under tight control.

Even many Chinese harbor fears that these technological tools could soon be used elsewhere in China and even beyond the country's borders. These concerns are justified. The scale of digital surveillance being used in Xinjiang is nothing short of a civilizational rupture. For the first time, it has become conceivable that an authoritarian regime will succeed in robbing an entire population of its culture and religion using digital means.

How should the West react to something like that?

The first step must be that of ascribing the diplomatic and political weight to the Xinjiang issue that it demands. Thus far, only the U.S. government has done so sufficiently. European heads of government, by contrast, have "addressed" the persecution of the Uighurs during their recent visits to China, but only as a side note and among other issues.

Second, European countries must insist more forcefully than they have thus far that Western diplomats be guaranteed unimpeded access to Xinjiang. It is important that they get a firsthand look at a situation that only very few journalists have thus far laid eyes on. Furthermore, such visits to the region by European diplomats are necessary to shine the spotlight on oppression. In contrast to the protest movement in Hong Kong, whose representatives have traveled the world to drum up attention for their demands, and in contrast to Tibet, whose plight is never completely ignored because of the presence of the Dalai Lama, the Uighurs have few prominent supporters abroad.

Third, the West must significantly increase both the political and economic cost for Beijing should it continue its human rights violations in Xinjiang. That could include import restrictions for companies that benefit from the tech-powered surveillance regime in Xinjiang, including firms like Dahua, Hikvision and Iflytek. Should the conflict escalate, the West could also consider targeted export bans.

Some of this may sound dated and somewhat futile given China's current economic strength. And one shouldn't have any illusions about how much influence the West has on Chinese domestic policy. It's not much. But for Beijing, the use of severe -- or even extreme -- measures in foreign policy is a matter of course. Norway learned as much in 2011 after regime critic Liu Xiaobo received that year's Nobel Peace Prize. South Korea likewise bore the brunt in 2017 after the deployment of a U.S. missile defense system in the country, and Canada was penalized by Beijing in 2018 after arresting the chief financial officer of Huawei, including the arrest of two Canadian citizens who are still behind bars to this day.

To be sure, China wouldn't be alone in bearing the costs for a more robust Xinjiang policy. Western companies would suffer as well. And Germany, because of its reliance on exports, is particularly exposed. But together with its European and American allies, Berlin does have significant influence. And because of its own history, Germany has a greater responsibility than any other country to flex its muscles.

Earlier this year, the European Commission released a report in which it referred to China as a "systemic rival." That is particularly true when it comes to Xinjiang. Still, the West must resist the temptation to conflate the human-rights violations in Xinjiang with other ongoing China conflicts and turn it into an all-encompassing confrontation between two worldviews. That would neither be a fruitful approach to the Xinjiang question, nor would it contribute to finding solutions to the other disputes. On the contrary, it would constitute a relapse into a world divided along an ideological fault line. With humanity currently facing an array of problems that cannot be solved without China -- nuclear proliferation, climate change, the fight against poverty and the consequences of globalization, to name a few -- that is something we can ill afford.

What is taking place in Xinjiang is unacceptable. Even as a million Uighurs have been separated from their children for indoctrination in camps, hundreds of millions of people further to the east in this vast country are living the "Chinese dream," working hard, ensuring a good education for their children, amassing consumer goods and traveling the world.

But sometimes, even in faraway Beijing, the reality of the surveillance state in western China makes an appearance. A few weeks after I had returned to the capital after my last trip to Xinjiang and written about the oppressive realities in the region for DER SPIEGEL, I was called in by the Foreign Ministry.

An official there lectured me about the "irresponsibility" of my coverage and about my ignorance of the true conditions in Xinjiang. "You sit in your air-conditioned office," he said, "and don't have a clue what is going on there." When I reminded him that I had just spent a week in the region, he pulled out a slip of paper and said: "Yes, and you pressured a taxi driver into talking about his family, among other things." He knew the exact place, date and time: the morning of July 7 in the oasis city of Kashgar.

It was true. On that day, a driver in Kashgar had taken me to the airport. And we chatted along the way, about our children. 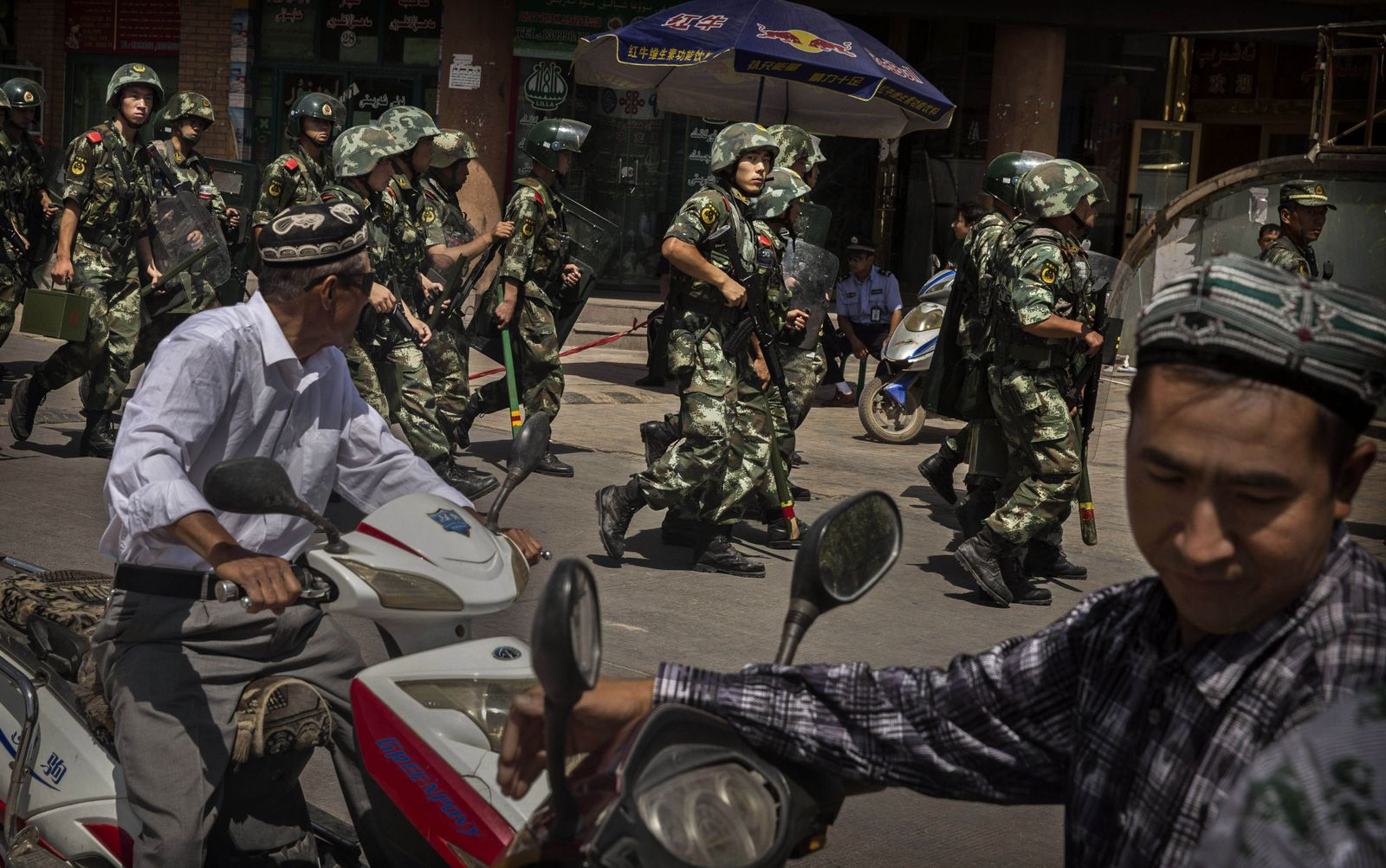