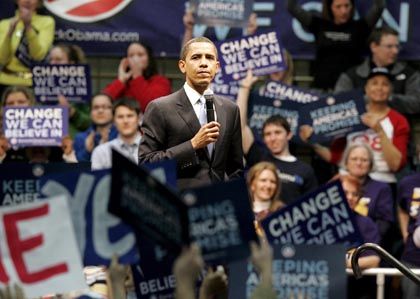 Obama talks the talk, but can he walk the walk?

Democratic presidential contender Barack Obama reminds many people of former President John F. Kennedy or civil rights leader Martin Luther King. But when I hear him speak, I have to think of the crazy days of the New Economy.

It was a magical time, even for the most levelheaded of business executives. For several years, wild promises seemed to be the most valuable currency in circulation. Profits? No big deal! Experience? Unnecessary! Realism? More of an obstacle than anything else. While some entrepreneurs undoubtedly had realistic business models and administrative talent, most of them were simply peddling ideas.

World economic output grew by 80 percent in real terms between 1980 and 2000. But the value of shares rose by about 1,000 percent within the same period. The market hit its zenith on March 10, 2000, and then the bubble burst. Suddenly the billion-dollar companies listed on the NASDAQ collapsed like so many cold soufflés. These days, Bernie Ebbers, the former CEO of Worldcom and one of the stars of the new economy, no longer appears on Larry King Live. Instead, he is currently serving a prison term in Louisiana for fraud and conspiracy.

The future is a hotly traded commodity in the 2008 US presidential campaign. Voters are hungry for change and for radical departure from a present they now perceive as mediocre, especially after seven meager years under the current president, George W. Bush. A man like Barack Obama is adept at taking advantage of this yearning. He utters beautiful sentences that massage the soul, sentences like: "We are the ones we have been waiting for" and "Our destiny will not be written for us, but by us."

At his campaign appearances, Obama and his adoring supporters toss his campaign slogan, "Yes, we can," back and forth until the room is in a frenzy. His events are reminiscent of Sunday morning exchanges between a fiery pastor and his enthusiastic congregation, except that Obama's crowds are even more fervent.

But anyone able to look past the rhetoric of the 46-year-old candidate will recognize a growing sense of doubt -- doubt that Obama easily manages to quell in his next speech, or his next one after that. The senator's successes in the primaries also have a narcotizing effect. Obama defines himself as a new type of politician, as someone who refuses to be judged by the old standards.

The rhetoric all sounds strangely familiar. In the New Economy's heyday, the traditional analysis of a stock's value based on its fundamentals -- key economic indicators like profit, sales and numbers of employees -- suddenly became a thing of the past, and was replaced by the so-called momentum method. Now a company was seen as a good business if its stock rose and an excellent business if its stock rose steeply. The motto of the day? I rise, therefore I am. Bernie Ebbers was considered a good manager in those days. The price of his company's stock rose from less than $5 in the early days to a high of $62 in 1999. Ebbers was flying high. He had momentum.

The young peddler of ideas from Chicago is experiencing the same boost, as he rushes from one electoral success to the next. Success feeds success. Obama has momentum, too.

Nevertheless, if Obama is elected he will eventually be forced to disappoint his voters. Politics in a democratic society is a balancing of interests, not a revivalist meeting. It takes finesse, experience and power to transform ideas into reality. Hope and optimism can enhance these qualities, but they cannot replace them. Obama's message is more of a promise to heal the nation than a campaign platform.

The future Obama is promising seems foggy and indistinct. He wants to change the rules of engagement in politics, but he neglects to explain how and in what direction. He wants to write a new page in the history books, but what handwriting does he plan to use to make his entry? He wants to drive out lobbyists, but if he does, who will champion the interests of union members, war veterans and chemical corporations? He wants to negotiate with the world's dictators, but to what end, exactly?

In fact, Obama's most dangerous land mines are hidden in foreign policy. A quick withdrawal from Iraq? Sounds great. But the mistake of having started this war in the first place cannot be corrected by ending it in a mad rush to get out of Iraq. A rapid withdrawal of the US military would most likely be followed by a bloody civil war. Al-Qaida would manage to sink its teeth into Iraq once and for all. Iran would rejoice. And Osama bin Laden and Iranian President Mahmoud Ahmadinejad would be the real winners of the 2008 American presidential election.

On top of all that, Obama, in an effort to show strength, has come up with a new, and in some ways exclusive, theater for the US armed forces. He talks about military operations in the nuclear power Pakistan, operations that he, as commander-in-chief, would order even without the approval of the United Nations. That is "the war we need to win," he says again and again.

But in reality a military campaign in Pakistan would be lunacy, even if many in the American media have chosen to studiously ignore Obama's comments. A comparison with President John F. Kennedy, who was 43 when he was elected, reveals that Kennedy was in fact unenthusiastic about going to war in Vietnam. It was a war the inexperienced President slid into, and if he was a war president, it was by accident and not design.

But there is no room for thoughtfulness in the turbulent world of Obamania. Hillary Clinton, his rival in the fight for the Democratic nomination, suffers from the same problems as traditional companies in the automotive and engineering industries did when confronted with the hype of the New Economy. She is out of touch with his supporters. She uses language to explain, while Obama uses rhetoric to intoxicate. She tells voters what she is bringing to the table. He tells them what they can become. If Clinton is a solid stock, Obama is an option. If she's a secure investment, he is speculation.

When the New Economy reached its conclusion, people suddenly realized that their hopes were dashed and their cravings for quick riches left unfulfilled. In 2002, Worldcom's stock price fell to less than 10 cents.

If democracy functions only half as well as the market economy, the Obama bubble will burst. The burning question is: When? Will it happen before the Democratic nomination this August -- or not until afterwards?