There is a phenomenon in opinion research called the Bradley effect, named after former Los Angeles Mayor Tom Bradley. When Bradley, who was black, ran to become governor of California in 1982, he was the frontrunner in all opinion polls until the very end of the campaign. But he lost on election day.

Since then, the term has been used to denote a serious shift in voter preferences caused by racial prejudice against a candidate -- prejudice that voters would never admit openly, but then express in all secrecy in the voting booth.

A more intense version of the Bradley effect has taken shape within the Democratic Party in 2008. "There is no white America," Barack Obama has said. "There is no black America. There is no Latino America. There is no Asian America. There is just the United States of America." Many prominent politicians of all skin colors, from New Mexico Governor Bill Richardson to Massachusetts Senator Ted Kennedy to Jesse Jackson, seem to agree with him. But the public euphoria is increasingly bumping up against the resistance of ordinary Democratic voters.

Within the Democratic Party, which likes to call itself the "party of the people," cheering on and voting for a candidate appear to be two very different things. Voters who say in public that they are inspired are sometimes quick to change their minds and settle scores in the election booth. In fact, perhaps the Bradley effect should be renamed the Obama effect.

A Uniter who Divides the Party

A significant segment of ordinary, middle-class Democrats, especially blue-collar workers and retirees, vote along racial and ethnic lines. The questions that interest them are politically relevant, but not politically correct. Is Obama an American with black skin color or a black man with an American passport? Is he a stranger or does he just seem like one? Is he part of the whole or just part of a segment of society? Ironically, the one candidate who is campaigning as a uniter appears to be dividing the party -- so much so, in fact, that the party establishment has spent the last few days debating Obama's electability. 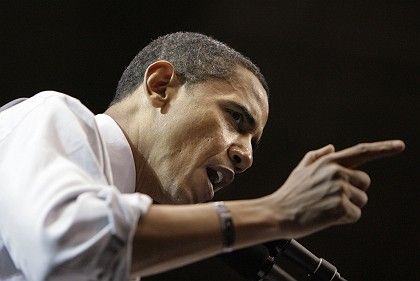 The superdelegates now have no choice but to pick Obama.

When there was still something playful about the Obama euphoria, significant numbers of whites were voting for the black candidate and blacks for the white candidate. Obama found strong support among white voters in the Democratic primaries in Iowa, Kansas, Idaho and Colorado. Hillary Clinton, on the other hand, captured the votes of many African Americans. But this lightness has now vanished, and animosity and open hostility amongst the electorate have taken its place. The Democratic divide has become all the more apparent in states with large blue-collar populations, like Ohio and Pennsylvania, even to those who until then had believed that the entire country had succumbed to what had been described as Obama's "messiah factor." In Ohio, as in Pennsylvania, an overwhelming majority of white, blue-collar workers voted for Clinton. By the same token, a huge majority of African Americans voted for Obama.

It seems as if the majority of African Americans are now forming a barricade around Obama in the increasingly heated primary battle. The Clintons have ripped open the divide with their clearly ambiguous remarks, and the Obamas have only widened that divide. One of the reasons that the hate-filled sermons coming from Reverend Jeremiah Wright, with his suggestion that "God damn America," were so troubling was that Obama had called him his "spiritual mentor" in the past. And it didn't help when Obama's wife Michelle said that her husband's bid to become president had made her proud, for the first time in her adult life, to be an American. Though refreshingly open, the statement was also politically naïve.

Reverand Wright certainly complicated matters for Obama this week with his rehabilitation tour. He has once again energized the black and white debate -- only this time to the detriment of the Illionois Senator. Wright, though isn't the main force driving white voters' away from the Obama camp. The trend coincides with white voters' growing disenchantment with the candidate. His message of hope and change is beginning to sound like a broken record. Phrases like "We are the ones we've been waiting for" sound lofty at first, but they eventually lose their appeal.

Nevertheless, the debate that has now begun comes too late for Hillary Clinton. The superdelegates, who can vote for the candidate of their choice without taking voter preferences into account, in fact have no other choice but to nominate Obama. They will have to suppress the growing fear that the Democrats cannot win the election against Republican candidate John McCain in November if Obama is their candidate. Still, as long as Obama can hold onto his slight lead in the number of pledged delegates, he will be the inevitable candidate. In fact, there is now almost a national political obligation to nominate Obama. A vote by superdelegates against Obama would set off shock waves within American society, with incalculable consequences. Young people would be outraged, intellectuals would be bitter and violence could erupt in predominantly black urban neighborhoods around the country.

America's not Burning, but it Is Smoldering

An apparent rejection of her black rival would also do more to harm Hillary Clinton than help her campaign. A candidacy against the background of angry youth or even burning barricades would be of little value. Thus, it is not Obama himself who now offers the strongest argument for his nomination, but the history of his ancestors. In fact, with his history standing at his side, Obama hardly needs to try any longer. This history peers into the present, sadly and silently, from a time we commonly call the past. And yet this is a past that America cannot seem to shake.

It was only 144 years ago that the American South fought a civil war to defend its right to slavery. Civil rights activist Martin Luther King was assassinated 40 years ago. Twenty years ago, black presidential candidate Jesse Jackson failed in the primaries because he was unable to gain the support of white Democrats. Racial barriers have been lowered since then, but they have not disappeared altogether.

It may not be burning, but it is smoldering in America. After seven years of George W. Bush, the Democratic Party has vowed to reconcile the country with itself. And now it will at least have to try, even if it means losing the presidency.

To reach the author and join the discussion, please visit GaborSteingart.com.