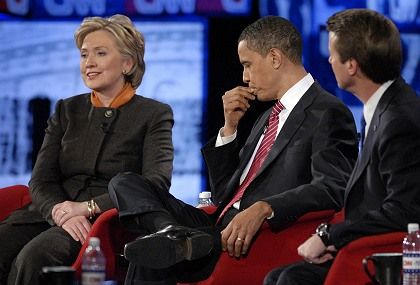 Is the dream over for Obama?

All of those people who've been dreaming of America's first black president now have to slowly wake up. It'll happen one day, hopefully, but not in this election. And perhaps his name will be Barack Obama. But that first black president will have a more mature personality than that which Obama, 46, can offer American voters today.

The senator from Illinois has now lost two primaries, losses that have turned the former superstar back into an ordinary candidate. And after the CNN debate on Monday night, one thing is clear: Obama is a candidate under friendly fire.

Hillary Clinton posed uncomfortable questions, which were aggressive and precise -- and as a result effective. Were there dodgy dealings in Chicago? Why did he support the Iraq war in the Senate, when he has always been against it? What exactly does he think on the issue of abortion?

A pop star who has to put up with such questions is no longer a pop star. To ask to be treated more fairly is a risky strategy for someone who is aiming at the top job in the western world. It's safe to say that Osama bin Laden isn't going to be any nicer.

Obama is down, but he's not out. At the moment, the similarities with Jesse Jackson, the black civil rights activist who ran for the Democratic presidential nomination twice in the 1980s, are greater than with former President John F. Kennedy. Jackson even managed to win 11 primaries in 1988.

Obama's campaign appearances are still energy-packed events, and he still manages to draw large crowds of supporters who routinely greet his words with applause, cheers and even tears. But it's even more interesting to note the kinds of people who are absent from the Obama crowds.

He hasn't managed to attract a strong following among older people and blue-collar workers. The majority of women find him interesting, but they support Hillary Clinton. The overwhelming majority of Hispanics are opposed to Obama, partly because he is black. Even African-Americans are not united in their support for Obama.

The Illinois senator's strongest advocates are young people and graduates, both groups where enthusiasm for Obama runs high. He is the candidate of the affluent and of society's winners. His message of hope and change seems to thrive in environments where people drink latte macchiatos and read the New York Times.

His idealism is contagious among those who expect more from politics than yet another tax cut and the next half-hearted Middle East peace initiative. His supporters love what they call "the vision thing," and they dream of a presidential election that will truly lead to groundbreaking change, of a revolution at the ballot box -- or at least something like it.

Obama is the candidate of the idealists. Only once in every couple of decades does someone come along who has the ability to deeply inspire this group, who are perhaps the most discerning voters of all. That fact alone makes him remarkable.

Obama also happens to be the candidate of choice for the foreign press, which explains why European correspondents tend to greatly amplify American voters' enthusiasm for him in their dispatches. Many in Europe would like nothing more than a "European" America. A former community organizer from Chicago seems to be the ideal candidate for all countries, especially Germany, in which public servants shape politics. Obama personifies Europe's hopes for a modern America: black, socially minded and gentle.

But this isn't what America looks like. And the evidence from the primaries so far suggests that it won't be what it looks like after the elections in November. At the center of society, the place where elections are won or lost in every democracy, Obama the candidate has not triggered the kinds of earthquakes that would be necessary to topple the status quo. The ground may be trembling, but it isn't shaking.

The deeper one penetrates into that all-important center of American society, the cooler are people's reactions to Obama. In places where work is hard and pay keeps shrinking, where the costs of education are rising and the fear of job losses has taken hold, Americans pay attention to him but don't support him. He may be touching the souls of blue-collar workers, but he hasn't been able to inspire them.

Low-income Americans have been especially reluctant to warm up to Obama. Hillaryland starts at annual household incomes of $50,000 or less. Even the endorsement of the biggest union in Las Vegas wasn't enough to convince the majority of union members to support Obama. America's lower-income citizens apparently prefer cash to change. They find his attacks on "Washington lobbyists" appealing, but not sufficiently concrete. Hillary Clinton's promise of universal health insurance for everybody strikes a different note among the country's lower-income working classes.

Obama also has trouble appealing to older Americans. In Iowa, 45 percent of voters over 65 voted for Clinton, while less than half as many preferred Obama. He was even less successful among older voters in Nevada, where close to two-thirds of Democrats over 60 voted for Clinton. Pollsters have noted the same pattern of aloofness to Obama throughout the country. Clinton's support within America's older population is twice as strong as Obama's. In a country where the old clearly outnumber the young, this doesn't bode well for Obama.

Among Hispanics, who in some states make up a larger contingent of voters than African-Americans, Obama has encountered strident resistance. Sergio Bendixen, a pollster working with the Clinton campaign, recently told the New Yorker: "The Hispanic voter -- and I want to say this very carefully -- has not shown a lot of willingness or affinity to support black candidates." Based on this logic, an Obama victory in South Carolina, where every second Democratic voter is black, would be more than offset by an Obama defeat in California, a much larger state that is dominated by whites and Hispanics. Staffers within the Clinton campaign are referring to the Hispanics as their firewall.

Obama has come too early for America -- or perhaps too late. In the 1990s, when the economy was doing well and Islamist terrorists had not yet appeared on the world stage, a man like Obama probably would have had stronger prospects. But tough times are bad times for visionaries.

All it takes to understand Clinton's appeal is to observe the way people react when she speaks with voters in small groups, as she recently did in a lecture hall on the campus of the University of Nevada. Hardly any college students were in the audience, but about 100 middle-aged women, some of whom had even dragged along their husbands, sat around the candidate on folding chairs.

Clinton told her audience about the hard work waiting for her in the White House, about responsibility and about her view of herself as a problem-solver. No one cheered, no one jumped up from her seat and there were no choruses of approval. But the women nodded quietly in response to Clinton's words. They didn't seem fired up, but they did feel understood.

Watching the group, I realized that perhaps this election isn't about visions at all, but about something even bigger: trust.