The United States Federal Reserve Bank, or Fed, seems as much a part of America as Coca-Cola or Pizza Hut. But at least one difference has become apparent in recent days. While the pizza chain and soft-drink maker are likely to expand their scope of influence in the age of globalization, the US central bank is finding that its power is shrinking.

No Fed chief in US history has been forced to submit to the kind of humiliation that Ben Bernanke is facing.

This is partly down to circumstances. Inflation is going up and up, and this year's average will likely top 4 percent. But this time Mr. Dollar is also Mr. Powerless. He can raise interest rates in the fall, or he can pray, which would probably be the better choice. At least prayer would not prevent the US economy from growing, a highly likely outcome if interest rates go up.

After years of growth, the United States is now on the brink of a recession, one that is more likely to be deepened than softened by a tight money policy. Investments will automatically become more expensive, consumer spending will be curbed and economic growth will slow down, immediately affecting unemployment figures and wages.

The textbook conclusion is that this will stabilize the value of money, because no one will dare demand higher wages or higher prices. But the macroeconomics textbooks are no longer worth much in the age of globalization. Modern inflation is driven by the global scarcity of resources. Nowadays purchasing power exceeds purchasing opportunity. Most of all, there is not enough oil, and too few raw materials and food products. These increasingly scarce resources are becoming the focus of disputes among many people and billions of dollars are at stake.

If the inflation introduced in the United States is excluded, a small miracle is revealed, namely something approaching price stability. Adjusted for inflation, prices are in fact rising by only 2.3 percent. If this were the extent of it, the Fed chief could simply blink like an old watchdog and go back to sleep. Instead, he is barking loudly, which is his job. But he has lost his bite, because the Fed's interest rate policy can do nothing about the scarcity of goods. 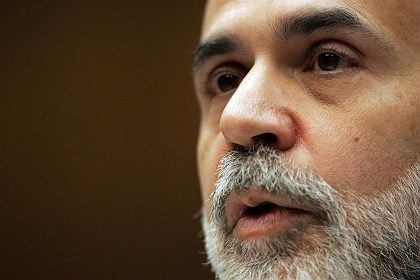 US Federal Reserve chairman Ben Bernanke. The entire US financial system is to come under the scrutiny of the IMF

Some of Bernanke's personal adversaries are also contributing significantly to his current humiliation. In the past, the chairman of the Federal Reserve was a pope among the priests of the financial elite. But unlike his predecessor Alan Greenspan, Bernanke is finding that his policies are not universally accepted, even within the Fed.

The last seven decisions reached by the Federal Open Market Committee, which sets monetary policy, were accompanied by a growing number of dissenting votes. Bernanke's critics say that with his policy of cheap money -- in other words, recurring rate reductions -- he in fact helped fuel the inflation problem he is now trying to combat.

Another problem for Mr. Dollar is that it will be several months before his actions take effect. Officials with the International Monetary Fund (IMF) have informed Bernanke about a plan that would have been unheard-of in the past: a general examination of the US financial system. The IMF's board of directors has ruled that a so-called Financial Sector Assessment Program (FSAP) is to be carried out in the United States. It is nothing less than an X-ray of the entire US financial system.

As part of the assessment, the Fed, the Securities and Exchange Commission (SEC), the major investment banks, mortgage banks and hedge funds will be asked to hand over confidential documents to the IMF team. They will be required to answer the questions they are asked during interviews. Their databases will be subjected to so-called stress tests -- worst-case scenarios designed to simulate the broader effects of failures of other major financial institutions or a continuing decline of the dollar.

Under its bylaws, the IMF is charged with the supervision of the international monetary system. Roughly two-thirds of IMF members -- but never the United States -- have already endured this painful procedure.

For seven years, US President George W. Bush refused to allow the IMF to conduct its assessment. Even now, he has only given the IMF board his consent under one important condition. The review can begin in Bush's last year in office, but it may not be completed until he has left the White House. This is bad news for the Fed chairman.

When the final report on the risks of the US financial system is released in 2010 -- and it is likely to cause a stir internationally -- only one of the people in positions of responsiblity today will still be in office: Ben Bernanke.