After the confetti has been shaken out of the hair and the party balloons have deflated, what is left from Tuesday's election night is a disturbing message: There is nothing to celebrate.

The winner is the loser. But the loser is not the winner. Clinton's victory was not big enough to snatch the nomination from Obama. But neither was his star power enough to woo the voters in the center.

It seems the race is jinxed: He was handed a defeat when he needed a victory, and she secured a victory when only an improbable triumph would have helped her.

Barring a miracle, Clinton's role at the Democratic Party convention in Denver in August will be limited to guest speaker. But Obama will go into the actual presidential election badly damaged.

On the night of Obama's first primary win, in the state of Iowa, this columnist wrote: "(Obama) has scant hope of reaching the White House. He's too young, too inexperienced, too vague, and for many Americans, too black. His magic words about the era of change, of hope, of an America he will unite -- all that will evaporate like morning mist."

This prediction was confirmed in Pennsylvania. The euphoria over the 46-year-old senator has until today only gripped 50 percent of Democratic voters -- who make up only a third of registered voters. The Obama flame burns, but only in parts of society. Obama receives more goodwill than actual votes. And his press is better than his real situation.

Obama's chances of a successful run for the White House are anything but rosy. There are three reasons why his presidential run will be difficult:

First, a politician who favors social policies has a tough time in a recession. In his desperation over the persistent rejection by white working class voters, Obama has shot himself in the foot.

He recently promised voters the moon at a trade union convention: State-subsidized health insurance. A $100 billion infrastructure program for the construction of bridges and roads. A $160 billion ecological investment program. Tax exemption for all pensioners with an annual income of under $50,000. Tax cuts for all middle-income groups. An increase in the minimum wage, which is currently set at $7.50 an hour.

But the voter groups which are decisive for any president distrust people who claim to be miracle workers. The union officials clapped, but many of its members lowered their heads pensively. 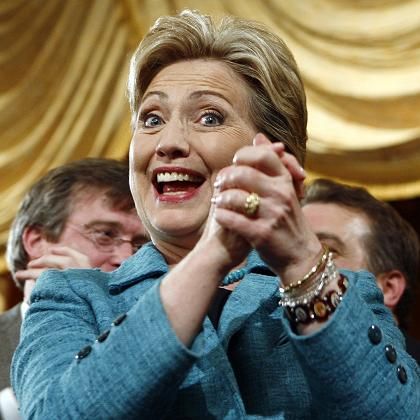 These people want new jobs, but they don't want new government debt. They want leadership, but Obama is only flashing his wallet.

Secondly, he is an opponent of war in a time of war. The United States is fighting a lonely and increasingly difficult war on two fronts, in Iraq and Afghanistan. He would like to finish the war quickly -- but the majority of Americans would like to win it first.

Past experience of former Democratic candidates shows that, in times of war, candidates who strike a pacifist tone have slim chances. While war was raging in Vietnam, Richard Nixon moved into the White House. George W. Bush won a landslide victory while the Iraq campaign was in full swing. Up to now, Hillary Clinton has expressed caution as far as the war is concerned.

Thirdly, he is a party favorite in times of dwindling party loyalty. He excites the active members of the Democratic Party, the officials, the young people and the university graduates, not to mention that part of the party -- a part which should not be underestimated -- which is to be found within newspapers and TV stations. Up to 35,000 people came to his meetings in Pennsylvania.

But the further one moves from the ranks of the true believers in the direction of the undecided -- from the left to the center, from young to old, from student to worker -- the lower the excitement over Obama. In Pennsylvania, 61 percent of older voters chose Clinton, as did 68 percent of Catholics, 65 percent of workers and over 70 percent of voters in rural areas. There, where life is hard, serious and sometimes monotonous, Obama struggles to make himself heard.

The American electoral system gives the center exceptional political power. Since most states are firmly in the hands of one party, attention is focused on the so-called swing states, large states such as Ohio, Texas, California and Pennsylvania which are sometimes Democratic and sometimes Republican. Obama has won many US states -- but not these swing states.

After Tuesday, the situation for the Democratic Party is no easier. The party seems to be cursed in this primary season, as if Obama's supporters and Clinton's fans had sealed a diabolical pact. They refuse him victory but spare her defeat.

But this game is approaching its terrible end. The superdelegates, who are independent from the party base, will have to commit a political murder in the coming months. Will it be Obama or Clinton? For the party, the decision could amount to political suicide.