It is currently the most coveted phone call in the world, and German Chancellor Angela Merkel received it on Thursday of last week. The call came shortly after 10:00 p.m. -- she was in a meeting when a certain Mr. Obama from America phoned her. He expressed his thanks for the congratulations that Merkel had sent to him. Then the two politicians talked about the challenges that they would tackle together. The tone was friendly and the conversation lasted just under 10 minutes.

Merkel, of the center-right Christian Democrats, is looking forward to working together with this US president -- and German Foreign Minister Frank-Walter Steinmeier, of the center-left Social Democrats, is even more excited at the prospect. Since the beginning of the year, Steinmeier has openly supported Barack Obama. During a trip to the US in April, he gave a speech at Harvard in which he shouted out the Democratic candidate's slogan "Yes, we can." Since then, the foreign minister has felt like he is Obama's man in Berlin.

Now Germany has the US president it wanted. Steinmeier is not alone in his enthusiasm: 85 percent of the German population would have also elected Obama. Hardly any other issue enjoys such widespread consensus in the country. Obama unites Germany almost as if he were soon going to be our president, too.

Germany will soon notice, however, that Obama has his own agenda. As the President of the United States of America, he primarily represents the interests of his country, which will not always match Germany's priorities.

Nevertheless, the two countries will now probably find more common ground -- and talks will become easier. With outgoing US President George W. Bush, there were eight years of stubborn gridlock and nasty surprises. He did what he thought was right, often without consideration for the Germans or the French. It is said that Obama is a man who knows how to listen. But that is only an advantage when the others have something to say.

This probably means that better, albeit more difficult times lie ahead for Germany's foreign policy. Steinmeier hopes that Obama will pursue a "new, open foreign policy," which no longer divides the world into friends and enemies. The German foreign minister says Obama will no longer think solely in terms of power balancing, whereby an improvement in relations with one country inevitably worsens relations with another. He says Obama will not fixate on security issues and thereby lose sight of pressing problems like the environment, energy, climate change and epidemics. "Obama's guiding principle is: 'America does not need more adversaries -- it needs more partners in the world,'" says Steinmeier.

The foreign ministry in Berlin expects the new US president to eliminate a number of problem areas shortly after he takes office. But they are also afraid that Obama will soon ask the question that virtually no one in Germany wants to hear: Could you send more troops to Afghanistan?

The strategists in the chancellery, the foreign ministry and the defense ministry are currently compiling arguments that would counter such brash proposals from the other side of the Atlantic. The ruling coalition of the CDU and the SPD are loathe to commit themselves to a stronger military involvement in Afghanistan -- and they want to avoid at all costs deploying German combat troops to the war-torn south.

Karsten Voigt, a foreign policy expert with the SPD, says he doesn't expect such demands. "Our partners know that this is politically impossible in Germany, especially during an election year." Eckart von Klaeden, the foreign policy spokesman for the CDU, even struck a tone reminiscent of former Chancellor Gerhard Schröder's rejection of the war in Iraq: "The deployment of German soldiers will be decided by the German government and the German parliament," he said, "regardless of what requests a future US president may approach us with."

In order to head off possible requests from Obama, government strategists have rushed to reinterpret decisions that were made long ago -- painting these as "concessions" that have already been made to the man in the White House. The German contingent has just been increased by 1,000 men to 4,500 troops. They also point out that since July Germany's armed forces, the Bundeswehr, have assembled an additional rapid deployment force of 200 soldiers in the north that, if necessary, can also help out in the south. In addition, Berlin is prepared to relieve the Americans by deploying NATO AWACS reconnaissance aircraft to monitor the airspace over Afghanistan.

And the Germans want to send more police officers. The question is whether this will suffice for Obama, and whether he will show the terrifying friendliness of inviting America's partners to talk about a common strategy, which could eventually force them to take joint responsibility.

A new strategy would only work if Western countries openly discussed their objectives in Afghanistan. They would have to admit that they cannot establish a democracy, equal rights for women, or a welfare state in Afghanistan. Shifting the focus from nation building to simply combating al-Qaida terrorists would presumably be the only basis for Europeans and Obama to formulate a joint policy. 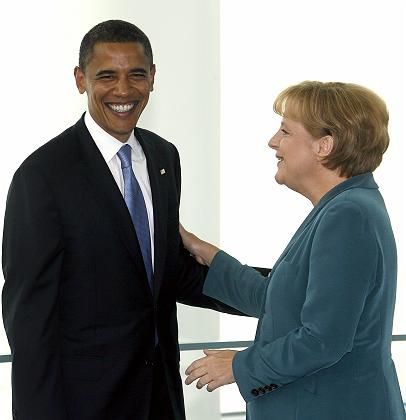 Merkel met Obama in July during his visit to Berlin.

The German foreign ministry anticipates a flurry of activity on the international political stage and has prepared a wide range of strategy papers that brief the minister, on 8 to 12 pages per subject, on the main challenges on key political fronts, including the Middle East, multilateralism, disarmament, energy and climate change. In most areas, Steinmeier's staff sense new opportunities.

Whereas Bush did not recognize until his second term in office that America the superpower can't lead the world on its own, Obama has immediately subscribed to the principle of multilateralism. During talks with Obama's advisors, Steinmeier's staff have discovered that the new president favors expanding the G-8, the select group of Western industrialized countries plus Japan and Russia that regularly meet to discuss world problems.

Such plans spark euphoria in Berlin's foreign ministry. Steinmeier went out on a limb at the SPD party conference in October when he declared: "We need to expand the G-8. That is the path that we're on, that is where we're headed."

His staff at the foreign ministry have been busy making preparations. In July, a planning committee of the foreign ministry drafted an informal "non-paper" and distributed it to European partners. The document stated that the "international system is insufficiently equipped to handle major challenges." It said integrating the new world powers in "rule-based global orders and institutions" was a "key objective for the 21st century." Up until now, the Germans have been considering a G-13, but they may propose including an Islamic country, such as Indonesia for example, as well.

In mid-October, Steinmeier's head of planning, Markus Ederer, met colleagues from France, the UK, Italy and top EU officials. Afterwards, he told his boss that there was "great support" for a G-13. The idea is that this "firmly established group" of 13 countries would do more than just discuss global issues -- they would also be obliged to "advocate these agreements in other institutions," for example, at the United Nations.

The financial crisis presents an initial test of Obama's willingness to reach a broad consensus. For the time being, it looks as if the Americans remain guided by the interests of Wall Street. Obama will have to change this course if he intends to build a reputation as a multilateralist.

Steinmeier's experts also sense opportunities in the Middle East. According to the foreign ministry, US diplomacy will quickly make overtures to Syria, a development that Steinmeier would find extremely gratifying.

For quite some time now, the mantra at the foreign ministry has been that if Damascus negotiated with Israel concerning the occupied Golan Heights, the West could kill two birds with one stone: It would create a prospect for peace for Israel and, at the same time, rob Iran of its last ally in the region. Such an initiative could perhaps persuade the government in Tehran to take a slightly more conciliatory approach.

However, if he wants to be an international savior, Obama also has to address the issue of global warming. German Environment Minister Sigmar Gabriel would actually rather see Obama begin his term of office right away instead of waiting until January. "We need a G-8 meeting in 2009 on climate protection, and perhaps even a special UN summit to hammer out an agreement," says Gabriel, "and with Obama as a leader this has at least become conceivable."

So far the UN has failed to reach a global agreement on climate protection because of US refusals to consent to a CO2 reduction plan as long as China and India have not come on board. However, both countries, each with populations of over a billion, have demanded that the US must first set a good example.

This stalemate could now be resolved. During the election campaign, Obama said he would participate in the Kyoto process and introduce a strict nationwide emissions trading scheme.

Merkel Falling Behind in Climate Protection

While the new man in Washington is calling for America to lead the way in climate protection, heads of state and governments in the EU still remain at odds over limits for CO2 emissions. Merkel, who was once called "the climate chancellor" is now pushing for large segments of German industry to be exempted from emissions trading. Obama has no plans for such exceptions in his US emissions trading concept. While Merkel is buying German carmakers more time to meet CO2 standards, Obama wants to push for legislation that would put a million electric cars on American highways by the year 2015.

This threatens to tarnish Merkel's image. Instead of playing the role of the leading climate protector, she now looks more like a foot-dragger. Environmental Minister Gabriel is delighted with the extra pressure: "Now the EU, and German industry in particular, has to be careful not to fall way behind the Americans on climate protection and green technologies."

Chemistry will also help determine the ultimate nature of relations with the new administration. When Obama came to Berlin in July, Merkel offered him a rather frosty reception by preventing him from giving his speech in front of the Brandenburg Gate. However, their talks afterwards reportedly went well.

By contrast, Foreign Minister Steinmeier played the perfect host. He met Obama at his limousine in the courtyard of the foreign ministry and accompanied him up the steps to his office. He reassured the Democratic candidate that he shouldn't take the domestic political squabbling over the Brandenburg Gate too seriously. Obama laughed.

This is also the beginning of a new era for the foreign minister. He has never really been able to establish the right relationship with America because the Bush administration eyed him with suspicion, as a friend and former associate of former Chancellor Gerhard Schröder, and as a politician who seeks dialogue with Russia. These hurdles have now been eliminated.

On the day after Obama's election, when Russian President Dmitry Medvedev threatened to deploy short-range missiles near the Polish border, Steinmeier was among the sharpest critics, calling it "the wrong signal at the wrong time."

He sees a role for Germany and himself as a mediator between the two old superpowers. Soon he plans to make a grand gesture toward Washington. After Obama is sworn into office, Steinmeier will travel to Iraq and, to a certain extent, put a symbolic end to the worst German-American political rift of the post-war era. The foreign ministry is currently working on proposals for development projects that Steinmeier could offer Iraq. A close aide to the minister says that the idea is also "to send a signal to Obama" that Germany supports his Middle East policies.

Translated from the German by Paul Cohen.