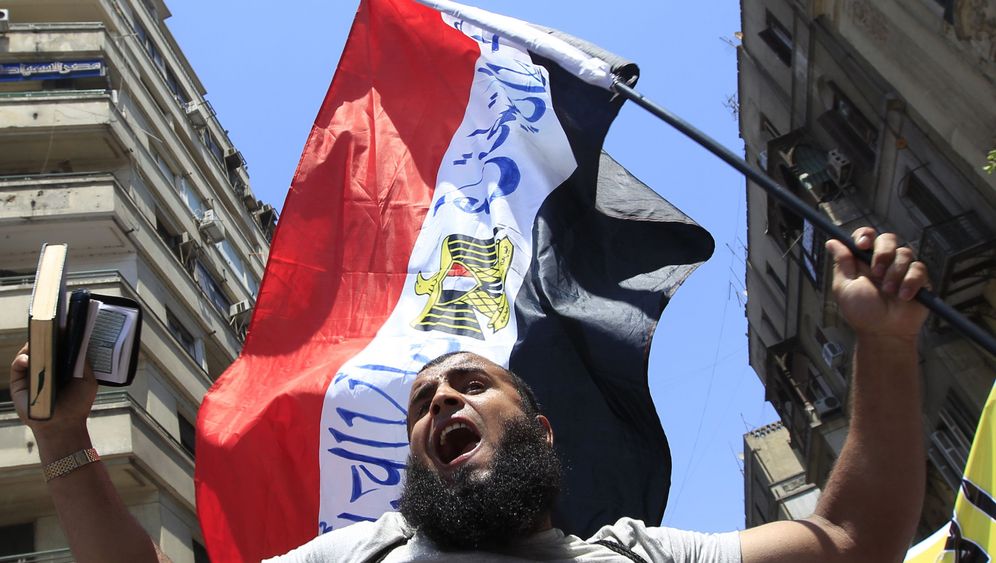 Photo Gallery: The Advance of the Salafists

It's a good thing that the visitor is a man. The sheikh doesn't speak with women. But then again, the reporter is a foreigner, which is also worrisome. There are so many prejudices about Islam in the West, says Sheikh Fawzi al-Sayeed. But perhaps, he adds, this conversation will help to spread the truth.

Sayeed, 70, a serious-looking man with a full gray beard, is wearing sandals, a crochet cap and the traditional Egyptian garment called the Jellabiya. He invites his guest into the Al-Tawheed Mosque. It is 6:30 a.m., and those gathered inside have just completed their morning prayers. Now they are forming a half circle around their sheikh, who has taken a seat on a wooden chair in the middle of the room. The Al-Tawheed Mosque in the northern part of Cairo is a plain-looking building with no ornate columns or other decoration; no unnecessary details to distract the faithful from their devotion to God.

As he does every morning, Sayeed asks his followers to reaffirm their devotion to the "true faith." He also asks them to film the interview that will follow the sermon with their mobile phones. It's purely a precaution, says the sheikh. Sayeed, an electrical engineer by trade, is one of Egypt's best-known Salafist imams. These days, it is not always easy to recognize the friends and the foes of Islam.

Since the Salafist Al-Nour Party, or "Party of Light," came in second place in the first round of Egypt's parliamentary elections, just behind the Muslim Brotherhood, the world has been looking to Cairo with concern. The two groups captured about 60 percent of those seats assigned on the basis of candidate lists assembled by the parties. One third of the seats are reserved for individual candidates. It is the first phase ofthe 2011-2012 parliamentary elections, with the second round beginning on Wednesday.

The election result confirms a clear trend, namely that wherever free elections have taken place in the Islamic Middle East in recent years, the religious parties have won: in the Gaza Strip in 2006, in Iraq in 2010, and in Turkey, Tunisia and Morocco in 2011.

But only in Egypt has such a radical group as the Salafists been able to establish itself as a party. This has serious implications, given that this is the most populous and culturally influential country in the Arab world; the revolutionary pulse that has been beating on Cairo's Tahrir Square for the last 11 months can be felt as far away as Libya and Syria, Iran and the Gulf states.

The Salafists' strong showing hasn't just shocked many Egyptians, but especially the country's revolutionary youth, liberals and leftists, Coptic Christians and moderate Muslims. It was, after all, the Salafists who had agitated against the Copts and boycotted the revolution, on the grounds that it was infiltrated with "whores and Zionists." And it was also the Salafists who, until now, had rejected free elections as "un-Islamic." And now they are coming into power as democrats?

The Al-Nour Party was formed in the spring as a melting pot of various conservative and formerly militant groups. Its members were not exactly known for their democratic ambitions, but rather for their close ties to the Kingdom of Saudi Arabia. Since the establishment of the "Party of Light," more than $100 million (€75 million) in campaign funds have allegedly made their way from the oil-rich, Wahhabite kingdom to the banks of the Nile.

The Salafists' political ideas are as unadorned as their mosques. They are united by the desire to live their lives in accordance with the example set by the Prophet Muhammad and his companions almost 1,400 years ago. This extends to the Salafists' rules on clothing and beards, which require a face veil for women and a full beard, generally without a moustache, for men.

In other words, the Salafists' aim is to return to the early days of Islam. But what is their program in Egypt?

"You see," says Sheikh Fawzi, "the Islamic world still suffers from the great injustice that was done to the religion. And yet the solution is so easy: We must simply apply the Koran and Sharia to heal our country, just as it was commanded by God." Of course, he adds, this includes stoning adulterers and cutting off the hands of thieves. The question as to whether these might not be barbaric practices is one the sheikh finds uncouth.

During the campaign, leading members of the Al-Nour Party seemed as if they came from a different era; it was a sharp contrast to Egypt's liberal tradition. For instance, when party spokesman Abdul Munaim al-Shahat appeared on a TV talk show, he insisted that a divider be set up between himself and a female guest. In his most recent demand, he calls upon Egyptians to "destroy the temples!" He wants Egypt to finally put an end to the "idolatrous worship" of its pharaonic heritage. If Shahat had his way, sculptures, statues and portraits spanning 5,000 years of Egyptian history would be covered with a layer of chalk, and pharaonic street names would be Islamicized.

Another member of the party leadership is calling for a ban on alcohol, even for Christians and foreigners, who can drink alcohol without punishment in most Gulf countries. He also wants to close beaches where Western women show too much skin and ban the wearing of bikinis. As an alternative, he suggests offering foreign tourists camel treks and ski instruction on sand dunes.

Is it for this that the Egyptian youth took to the streets in late January? Is this why they overthrew autocratic former Egyptian President Hosni Mubarak?

No, says Amr Iss al-Rigal. "But this is merely a transitional phenomenon. We had a feeling that the religious groups would triumph at first -- because they, like the Salafists, have friends in the oil monarchies. And because they, like the Muslim Brothers, were long members of the opposition, which gave them time to organize."

Rigal, 28, is standing on a busy street in Imbaba, a working-class neighborhood in Cairo. It is well after midnight, and he looks tired as he patiently endures the flurry of camera flashes coming from Egyptian journalists. A campaign banner bearing his likeness flutters above him, stretched between two trees. The words "Coalition of Revolutionary Youth" are written on the banner. The candidate poses for the photographers one more time. It is his last press event of the day. "The democrats will prevail in the long run," says Rigal, with a defiant and self-confident smile.

Cause Worth Fighting For

The young lawyer is one of the heroes of the revolution. Everyone who fought on Tahrir Square knows him. In 2004, he joined a liberal party that challenged Mubarak in the 2005 presidential election, albeit unsuccessfully. In 2008, Rigal was among the protagonists of the "April 6 Youth Movement," which played an important role in launching the revolution -- with a Facebook group initially consisting of thousands, followed by tens and then hundreds of thousands of supporters.

Rigal and his friends were among the first to protest on Tahrir Square, where they persevered, ran from police, chanted slogans and sang songs. He will never forget the magic of those days, and the realization that freedom is a cause worth fighting for, says Rigal.

The former revolutionary has now turned into a candidate for parliament. And his prospects are good, even though he is campaigning directly against the Islamists in the poor Imbaba neighborhood. As the son of a bus driver, Rigal is familiar with the people who vote for the Islamists. And because his father was once a member of the radical group al-Gamaa al-Islamiyya, he also knows what makes the Islamists so successful. "They appeal to your religious feelings, to your conscience. They distribute meat and coal. But that isn't a platform. You don't create jobs just by being devout." Rigal says that whenever he has told voters about their political rights, about their right to participate in the democratic process, to education and to healthcare, they have almost always reacted with astonishment and curiosity.

'A Long Way from the Turkish Model'

People like him, says Rigal, are even more suspect to the ruling military council than the Islamists. The army leadership could come to terms with the pragmatic and even increasingly opportunistic Muslim Brotherhood, as it has demonstrated time and again. The Salafists, says Rigal, did well under Mubarak, "because the threatening posture emanating from the militant groups enabled the regime to maintain its police apparatus and its emergency laws," says Rigal. "The democracy movement, by comparison, is uncontrollable, which the generals hate."

Egyptians are waiting anxiously to see how the powerful Muslim Brothers and their "Freedom and Justice Party" will position themselves. Will they distance themselves from the Salafists and seek an alliance with liberal forces? Or will they join the Salafists to create an orthodox Islamic Egypt?

Christians, liberals and secularists aren't the only ones tormented by the fear that Egypt could become an undemocratic country through democratic means. When Turkish Prime Minister Recep Tayyip Erdogan traveled to Cairo in September, two months before the election began, the Muslim Brotherhood cheered his arrival. Then he gave a speech and said: "A secular nation respects all religions. Do not fear secularism."

Suddenly the Muslim Brotherhood was no longer cheering, while the Salafists sharply criticized secularism, calling it the "work of the devil." It appears that Egypt's Islamists are still a long way from the Turkish model.