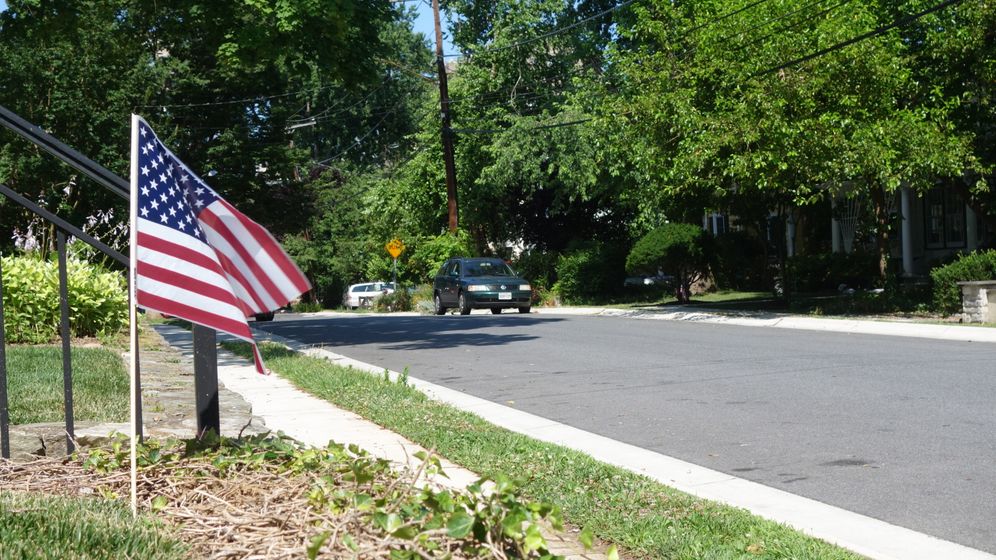 I recently took another walk around our neighborhood with my children. We went out through the front door, down the four steps from our porch and then right onto Highland Avenue down to Lynbrook Park. It's a nice park with lots of tall trees, a basketball court, a playground and a large green field. It's surrounded by those American suburban homes that always seem to be built the same: driveway, garage, porch and front yard. Some of them have the American flag flying over the entrance.

It's an idyllic setting. At least on the surface.

The kids wanted to swing a bit on the playground. The sun was shining and it was warm out, but hardly anyone was out and about. No people, no cars on the road, no children throwing balls or walking dogs. The field was empty, as was the playground. The neighborhood felt like a still-life -- as it so often had before.

We spent two years living in Bethesda, a privileged, almost exclusively white suburb located a few kilometers north of Washington, D.C. In many respects, it was a wonderful and exciting time. We experienced history in the making. We had to find our way in foreign surroundings, but learned that we had the skills to do so.

Over time, my daughters became little American girls. They now sing songs by Katy Perry and Miley Cyrus, they love motorhomes and collect Shopkins and they say things like "it's beautiful here" when they walk into a Disney Store. On those rare days when we don't drive our car to the supermarket, they think something must be wrong. In them, it is possible to see just how powerful the lure of the American way of life can still be. That can be annoying. But it's also kind of cute -- at least for a short amount of time.

I liked living in our neighborhood. We had great neighbors and the one's next door quickly became our friends. It's often said that relationships in the United States are superficial, but that wasn't out experience.

Nevertheless, the emptiness and sterility of the streets often got to me. Something was missing: vibrancy, public life and the feeling that a neighborhood is something that actually gets used and isn't just some movie set. Our neighbor Craig says that many Americans prefer to stay home because they have become comfortable, immobile. Because everything can be ordered online. Because air conditioning makes things so much more comfortable than the real weather outside. Because cars have become a second home for many. "We're complacent," Craig says. But is that really it?

I read a book a while ago by Barry Glassner, a sociologist. Glassner's theory is that Americans live in a culture of fear and don't do anything to try to counter it -- instead allowing their lives to slide into a downward spiral of paranoia. I've thought a lot about this theory. In Bethesda, there's not really much to be afraid of other than, perhaps, mosquitoes or car accidents. But even a single neurosis can be enough to make one's home seem like a refuge. To me, Bethesda often seemed like one big refuge.

Fear, of course, is nothing new in America. It's a country that has always believed that the apocalypse is somehow just around the corner. But the level of fear that has developed in the United States -- both on a smaller and larger scale -- my God! You don't have to look very far to find it. Stores provide anti-bacterial wipes to protect their customers from germs on grocery carts. Parents obsessively coddle their children by driving them to school and picking them up each day. Fences surround playgrounds to prevent anything bad from happening. Alarms to protect classrooms from school shooters are ubiquitous. Hysteria is everywhere on the cable news channels.

A study was released recently about the things Americans fear the most. It includes literally everything. Terrorism and identity theft. Corrupt companies and financial ruin. Tornadoes and adultery. There is an explanation for this. America is no longer winning wars. Other countries suddenly also have a lot of power. Everything has become insanely fast. And the fear of external threats can influence the psyche -- there's no question about that.

There's also a domestic dimension to this fear. Many Americans no longer trust their politicians or the elite. They no longer know what to believe in a situation where the macroeconomic indicators are trending positive but the amount of money that lands in their wallets is getting ever smaller. Many believe they have to take their fate in their own hands. And that can be exhausting.

American Fear Can Be Contagious

Donald Trump has been masterful in understanding how to take advantage of that fear -- in many areas of life. In politics, in the real estate market and also in the media. At home, we subscribed to The Washington Post. My wife read the entire newspaper, even the local section -- leading her to say things like, "Let's not drive through Prince William County -- there are constantly shootings there." At first, I laughed at her. That is, until I also noticed that I myself had grown more cautious. For example, I no longer like going to stadiums that don't have security gates. Is that silly? Yes, but fear in America can be contagious.

And it's true, this country often drives people to despair, even if you live in a bubble. It is wrought with contradictions. Everyone talks about security, but the Americans haven't even managed to impose reasonable controls on weapon ownership. Everyone talks about freedom, but then, at the swimming pool we went to a few streets to the north, girls were made to wear bikinis even as babies. If I bought a bottle of wine at the store, I had to keep it hidden in a dark plastic bag until I got home.

We recently got pulled over by the police because I had allegedly swerved outside my lane. What would happen if I didn't sign the ticket, I asked? "Then I will arrest you," the officer said. Don't go to jail dad, my daughter called out. Sometimes you feel like you're under observation in the United States -- and not free at all.

It Doesn't Matter What, It Just Has to Be New

Many say the country is going down the tubes. Trump, the injustice, the debts to China. That may be, but I'm not so certain.

In January 2016, a house stood across from our own. When we looked out the window, we could see that the house didn't really belong anymore. It was small and old and a little dirty and run down. No one had been taking care of the yard. At some point, a bulldozer showed up. Within an hour, the house no longer existed. Only two months later, a new home had been built on the same property -- with six bedrooms, four bathrooms for $1.6 million. Of course, it also had a driveway, garage, porch and front yard. A family is living there now, and they appear to be happy -- at least when they make an appearance.

Was it displacement? You could see it that way. But for me, that house remains a metaphor for the way the country ticks. And how we tick as Germans. We would have approached the problem differently. We probably would have tried fixing up the house -- putting in a few new windows and giving the place a fresh coat of paint. We would have somehow tried to rescue it. After all, it used to be grandpa's place.

When you live in another country, you also learn a lot more about your own culture. As Germans, we're not fond of getting rid of old things. We preserve and optimize things. One thing we're definitely not very good at is the idea of just scrapping everything and starting over from scratch.

Americans have an uncanny ability to do this. If they get tired of something, they just order a bulldozer. Cars are discarded, as are homes, theories, ideas, sports heroes, professions, companies and politicians. All that matters is that they are replaced by something new. The moon? Been there, done that! Next time it's going to be Mars. Things aren't going well at General Motors? Then we'll build Tesla.

I personally believe that, to a certain extent, Hillary Clinton was also a victim of this mentality. She had been on the scene for too long. The Americans were bored by the prospect of her becoming president and instead just chose to vote for someone else. And this despite the fact that they knew doing so might be extremely risky. Or could it be that this desire to take risks is also what led them to vote for someone else?

A Country that Still Has Dreams

The readiness to question everything can be dangerous. But I also admire it. It makes the country creative, dynamic and exciting. It ensures that America is a country that can shed its skin and transform itself. It's something that will eventually be felt by Donald Trump, as well. After Barack Obama's election as president, we thought to ourselves: That's the real America. But the tide can shift pretty quickly here. Trump will be gone in 2024 at the latest. Nobody can predict what will follow him. Perhaps a king -- who knows?

America is a place where people have dreams. They still do today, despite everything. My neighbor Mark is actually a painter. But for the last few years, he's been a psychologist. Mark wrote an article that he believes will revolutionize neuroscience. I don't understand any of it. But the strange thing is that, when I listen to him talk about it, I wouldn't rule out that possibility.

During the election campaign, I met Zoltan Istvan. Zoltan also wanted to become president. He believes in eternal life and wants to evade death by becoming a robot. Zoltan had no chance of winning the election. And that robot idea? Not sure anything will come of that either. But I was deeply impressed by the enthusiasm with which he traveled across the country.

A street fair recently took place in our neighborhood. A woman in her late 40s named Lisa organizes it twice each year. She collects signatures and then goes to the local authorities to get a permit to block the entire street. She even set up a Facebook group and manages a small budget. Lisa has a day job, but she tends to her block in Bethesda as if it were her true profession.

On the day of the street fair, which was also intended as a send-off for me and my family, everyone was suddenly outside. The children rode a pony across the intersection. Then they did gymnastics in the street. We drank beer in our front yards, played games and ate like kings. My neighborhood had suddenly become very lively.

It was a good farewell. 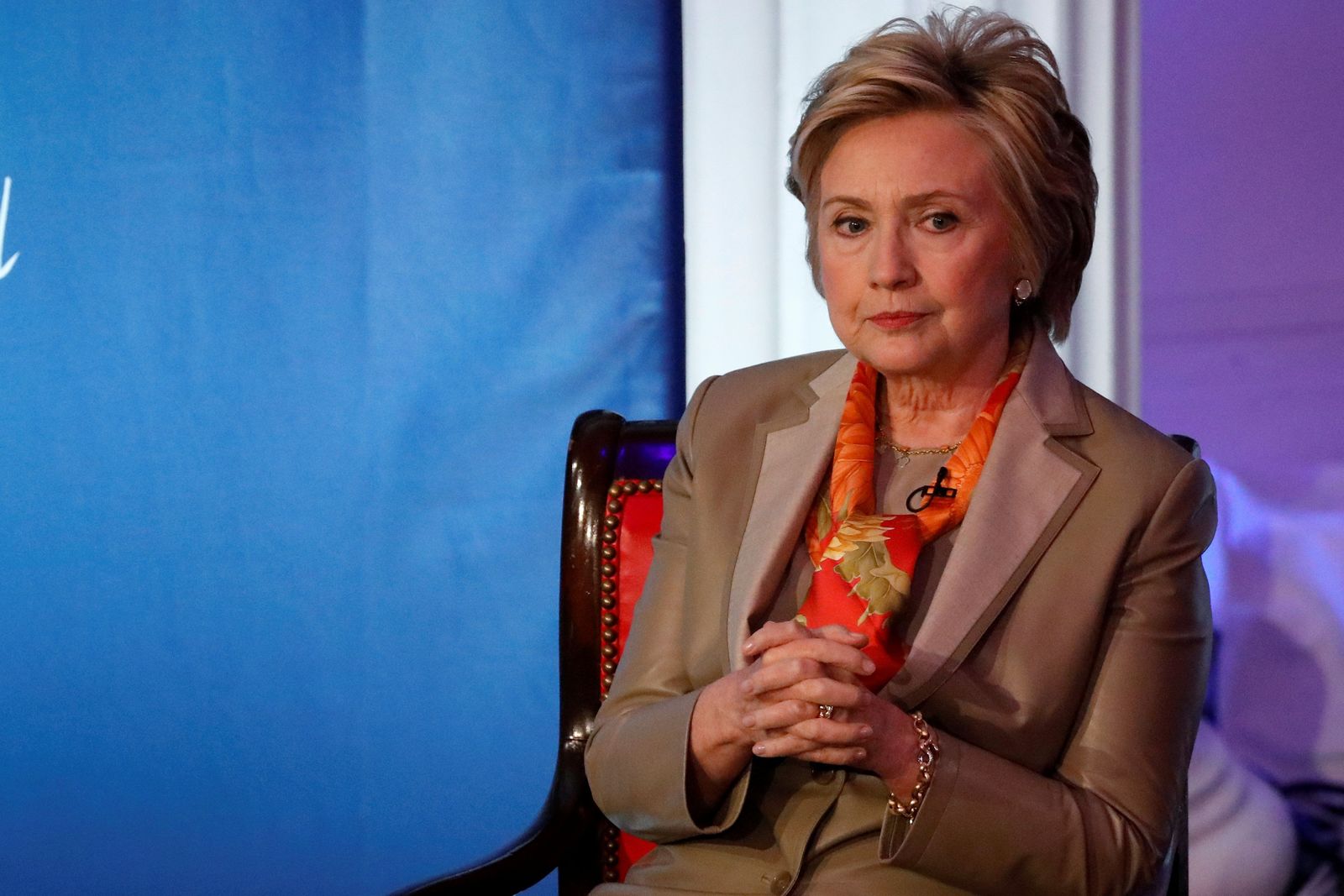 But it can also end dangerously. Hillary Clinton, to a certain extent, was a victim of this mentality. The Democrats had been in power for too long. The prospect of a Clinton presidency appears to have bored many voters, and now Donald Trump is in the White House.