He dispenses with the usual Japanese greeting ritual. Business cards presented with both hands, bowing, drinking tea -- there's no time for such formalities. He has to explain the history of the planet, nearly five billion years, in just one hour.

Hi, Im Shige, he says, waving his hands in the air. Then he dashes into his office, a researchers warren on the campus of the Tokyo Institute of Technology, jam-packed with piles of paper, hiking boots, posters, rock samples and a couch with a sleeping bag. Shige is an unbridled enthusiast, a pioneer and a brilliant polymath.

Shiges full name is Maruyama Shigenori. In Japan, its customary to refer to ones family name first. Maruyama is a passionate collector who has gathered 160,000 minerals and exhibited them in a museum. He is also one of the worlds leading geophysicists. His academic articles rank among the most cited in his field, and his works are found in many geological reference libraries.

Yet despite this widespread recognition, this Japanese researcher in his late 50s continuously provokes controversy in the academic world with his bold hypotheses. Currently, he is stirring things up with a new fascinating theory on the lifecycle of the Earths crust.

Maruyama is basically taking the ideas of Alfred Wegener to the next level. Wegener was a German explorer and meteorologist who believed back in 1912 that the continents roamed about on the surface of the Earth -- an idea that was ridiculed by even his most supportive research colleagues as a delirious vision and the wonderful dream of a great poet. It wasnt until the 1960s that studies of the ocean floor finally provided irrefutable proof that the delirious geo-poet had been right after all.

Today, every child learns in school that the continents are enormous plates that drift on the Earths red-hot mantle like icebergs on the ocean. Yet this hypothesis still lacks a logical and convincing foundation. Nobody has been able to explain the actual mechanics behind the motor that drives the drifting and breaking-up of the continental plates.

The inner reaches of the Earth remain shrouded in mystery. Even the surface of Mars has been explored more extensively. Because deep drilling comes to a halt after a maximum of 12 kilometers, the remaining 6,300 kilometers to the center of the Earth remain inaccessible. Researchers find themselves playing the role of armchair travelers who recount a journey from New York to Patagonia, but actually only know the way to New Jersey.

Nonetheless, Maruyama is convinced that he understands what happens deep below our feet: The continental drift that we observe on the surface of the Earth has its counterpart in the Earths mantle, explains the professor, his arms gesticulating like two rotors that paint a picture of the demise of a continent.

Old, cold plates are pushed down into the Earths mantle on the continental edges, he explains. At this point they collect large amounts of iron. You can imagine it as something similar to water condensation. Weighted down by the iron, the plates sink farther and farther into the hot, molten rock until they reach the inner sanctum of the Earths mantle. There, at a depth of 2,900 kilometers, they finally halt their decent and settle into plate graveyards. This is presumably the outer edge of the earths heavy core, where the temperature is 4,000 degrees Celsius (7,200 degrees Fahrenheit). 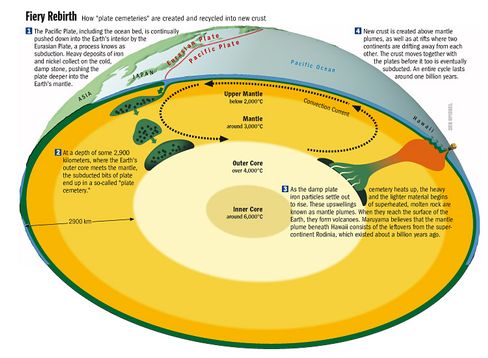 How the life cycle of a continent works.

Brimming with enthusiasm, Maruyama continues: But the capsized continents dont simply rest in their plate graveyards forever. Rather, they are about to experience a sudden resurrection. Heat and pressure in the depths trigger chemical processes, causing the plates to deposit their load of heavy elements. Once liberated of this burden, they become lighter than their surroundings, causing them to rise like corks in water. The result: Above the old plate graves, on the floor of the Earths molten mantle, a mushroom-shaped upwelling of abnormally hot magma called a mantle plume makes its way toward the surface.

Eventually, the rising flow of molten rock reaches the crystallized crust and cuts through it like a welding torch. Volcanoes form, such as those on the Big Island of Hawaii. Maruyama says the red hot lava that erupts on the volcanic island comes directly from an old plate cemetery 2,900 kilometers below the surface, where the remains of an ancient continent that broke up some 750 million years ago simmer to the surface. His theory postulates the amazing comeback story of this ancient rock from the deep.

According to Maruyama, the key ingredient for the chemistry of the Earths interior is the same one that determines the weather on the surface: water. The sunken ocean plates have old seawater locked in their mineral structure -- only a few parts per thousand, but enough to drastically change the characteristics of the rock.

Even minute quantities of water in the ex-floor of the ocean can significantly lower its melting point -- and this speeds up its eventual return to the surface. The water helps the rock to lose its load of heavy iron, thereby increasing the buoyancy of this old plate material.

No Different than the Weather

Maruyama compares the lifecycle of the plates with the circulation of water, which evaporates, forms clouds, and rains back down to earth again. The ocean floors correspond more or less to the clouds, he says, and the plate graveyards in the deep are like the bodies of water that are fed by rain. This is where the magma rises to form new clouds once again.

The geophysicist thus paints a three-dimensional picture of the planet Earth where, in addition to the continents drifting on the surface, there is room for anti-plate tectonics at the base of the Earths mantle. An anti-crust deep below reflects to a certain degree events on the surface, with lakes and mountains and rivers of viscous molten rock.

Such theories could fundamentally change our understanding of the Earth. A number of school textbooks will soon have to be revised or at least supplemented, says Ulrich Hansen of the Institute for Geophysics in Münster, Germany. Up until now, the movement of the continental plates has been generally described as a two-dimensional phenomenon, but today experts agree that its fueled by three-dimensional convection movements deep below the surface.

Hansens research group is attempting to test theories like Maruyamas on supercomputers. The programs run for up to a quarter of a year before they spew out the results. Maruyama has two key location advantages, says Hansen. First, Japan has the fastest supercomputers in the world. And besides that, there are an incredibly large number of earthquakes and earthquake monitoring stations.

Earthquakes and computing power are the main requirements for researchers looking to piece together an x-ray-like image of the Earths interior. The principle is simple enough: When an earthquake strikes, the seismic waves race clear across the Earths mantle. It takes a full quarter of an hour for the shockwave to travel from Indonesia to Germany. The duration of this journey reveals a great deal to researchers. The waves are slowed down by viscous and hot regions, like mantle plumes, and accelerated by solid or cold objects.

Elemental forces -- such as the earthquake that hit Kobe in 1995 and killed nearly 5,100 Japanese -- are thus Maruyamas main source of data. The island nation lies directly on the West Pacific crossroads of three huge plates that ram into each other like cars in a highway pile-up: the Pacific, Australian and Eurasian tectonic plates. Under his feet he assumes that there is an enormous plate cemetery with the remains of the Pacific Ocean floor.

Many details of the plate graveyards hypothesis remain controversial. How viscous is the molten rock there? What chemical reactions are possible? These puzzles are particularly difficult to solve due to the hellish temperatures and pressure of the Earths lower mantle -- conditions that cannot be realistically reproduced in a laboratory.

But while the experts are busy debating such questions, Maruyama has long since moved on. He is working on a global formula for a vast new field of study that would include dozens of disciplines collaborating to produce an overall picture of the Earth.

A new institute called the Center for Bio-Earth Planetology will be launched in 2009 and fully dedicated to creating a new conception of life in space. It will have more than 200 researchers and a budget of over €110 million ($158 million) for nine years. And, of course, Maruyama will be the chief scientist.

He has ambitious goals. For instance, he wants to find out if the continents will merge again in 250 million years to form a single super-continent; how meteorites change the chemical composition of the Earth; and what the connection is between the temperature of a planet and its magnetic field. This, explains Maruyama, "protects plants and animals from being bombarded with cosmic radiation, which in turn influences the rate of mutations and thus the development of new forms of life.

As he connects the dots from astronomy to life sciences, the outlines emerge of an all-encompassing image of entire planets, which now appear as living super-organisms.

He believes that expanding the study of life sciences to the core of our world and the depths of outer space will help us find distant relatives of our own Earth -- planets that could also sustain life.