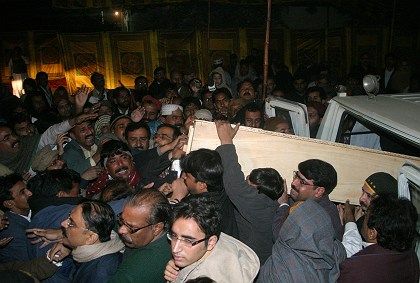 Supporters of Pakistan's assassinated opposition leader Benazir Bhutto unload her coffin from an ambulance at her ancestral house.

The body of Pakistani opposition leader Benazir Bhutto arrived in her home village for burial on Friday, a day after her assassination plunged the country into violence and political crisis.

The body of the 54-year-old veteran politician, who was killed after an election rally in the city of Rawalpindi on Thursday, was transported to Karachi on Friday morning and then on to her home village of Garhi Khuda Bakhsh to be buried in the family mausoleum. Thousands of mourners wept and beat their heads in grief as her coffin was carried out of her ancestral home at the start of the funeral procession. Her husband, Asif Ali Zardari, and her three children accompanied the closed coffin draped with the green, red and black tricolor of her Pakistan People's Party (PPP) as it began the 5-km (3-mile) journey.

As she was being laid to rest, her furious supporters across the country ransacked banks and set fire to train stations and vehicles in a spasm of violence that threatened to plunge the country into deep crisis less than two weeks before parliamentary elections.

The violence was particularly fierce in the province of Sindh, a Bhutto stronghold. Shops, cars and government buildings were set ablaze as the news of her murder spread and at least four people were killed there on Thursday. On Friday, gunmen shot dead a policeman and wounded three others in Karachi, the capital of Sindh. A "shoot on sight" order was then issued to police to deal with the violence. Hours later five protestors were injured after police shot at them during disturbances in the southern city of Hyderabad.

Bhutto was killed after an election rally in the city of Rawalpindi, a garrison town near the capital Islambad. It was the same city where her father former Prime Minister Zulfikar Ali Bhutto was hanged in 1979 after being deposed in a coup. Bhutto, who had twice been prime minister, had returned from exile in October and hoped to build on her massive popular support to become prime minister for a third time. Bhutto had condemned the state of emergency imposed by President Pervez Musharraf in November but she was also strongly critical of Islamist violence and had been threatened by pro-Taliban militants.

The violence in reaction to her killing also spread to Indian Kashmir on Friday, where police fired tear gas at hundreds of protestors who chanted "Long live Pakistan" and "Long live Bhutto." Kashmir is a territorial flashpoint between neighbors India and Pakistan, both of whom claim the region.

As Pakistan reels from the blow of losing Bhutto, the political crisis that has gripped the country continued. While caretaker Prime Minister Mohammadmian Soomro insisted on Friday that parliamentary elections scheduled for Jan. 8 would go ahead, another former prime minister and rival of Bhutto, Nawaz Sharif, said his party would boycott them. Sharif accused Musharraf, who seized power as military leader in 1999 but recently stepped down as head of the army, of creating instability. Musharraf has condemned the murder, saying: "We will not sit and rest until we get rid of these terrorists."