Georgian President Mikhail Saakashvili is preparing the Georgian population for the planned publication in September of the European Union's report into the five-day war between Georgia and Russia in August 2008. The document is expected to assign primary responsibility for the attack on the South Ossetian capital Tskhinvali to Saakashvili -- with the qualification that Moscow provoked him. 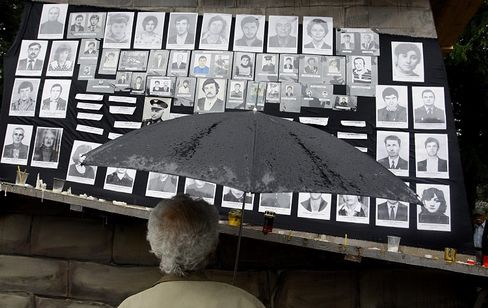 An Ossetian man views portraits of people killed in the Aug. 2008 Russia-Georgia war at the Genocide Museum in Tskhinvali.

As a counter-measure, the government in Tbilisi has already published a separate 190-page report concluding that it was Russia which "launched a large-scale assault on Georgia" last year. "Now the West can have no doubt who started the war, and why," commented Georgia's state minister on reintegration, Temur Yakobashvili.

However, NATO and EU experts have so far found no evidence to support Georgian claims that a Russian column of 150 tanks and armored vehicles had advanced into South Ossetia before the Georgian attack on Tskhinvali.

Georgian media has prominently reported on statements by Western politicians which support the Georgian position. However criticism of Georgia is suppressed or presented as the product of a conspiracy. After SPIEGEL in June reported on the provisional internal results of the EU investigative commission, the pro-government weekly newspaper Georgia Today explained the report's uncomfortable conclusion to its readers by falsely claiming that SPIEGEL had obtained its information from Russian intelligence. In addition, the newspaper made the completely untrue assertion that the German magazine is owned by a subsidiary of the Russian energy company Gazprom -- and is therefore a "mouthpiece for Putin."

The conflict broke out on Aug. 7, 2008 when Georgia attacked the breakaway region of South Ossetia. Russian forces quickly repelled the Georgian attack and advanced into Georgia. Hundreds of people, including many civilians, are believed to have died during the fighting before a ceasefire was agreed upon on Aug. 12.

In a report to mark the one-year anniversary of the conflict, the human rights group Amnesty International said last week that 30,000 ethnic Georgians who were displaced from South Ossetia as a result of the conflict have been unable to return to their homes.