In mid-April 2003, German author Hans Magnus Enzensberger published a piece in the daily Frankfurter Allgemeine Zeitung in which he celebrated the fall of Saddam Hussein. He wrote of his "deep," even "triumphant" joy upon learning of the end of Iraq's brutal dictatorship. The article was also full of derision and mockery for the skeptics who warned against the wisdom of US President George W. Bush's invasion.

At the time, I was thrilled about Enzensberger's contribution. His was one of very few voices that dared counter the almost unanimous public opposition to the American offensive in Iraq. Just before the outbreak of the war, I visited northern Iraq, including the town of Halabja, where Saddam murdered thousands of Iraqi Kurds with poison gas in 1988. The gas killed children playing in the streets and women on their way to the market. I met with survivors whose lungs were almost destroyed: people who had been dying a painful death for the 15 years since the attack. More than any other city, Halabja is symbolic of the crimes Saddam perpetrated against his own people. Although I was not in favor of the Iraq war, my visit made it clear to me that the overthrow of a dictator is cause for joy.

But in the end, the skeptics were proven right. In 2003, Enzensberger believed forecasts that up to 200,000 people would die in Iraq as a result of the invasion were absurdly high. But serious studies have suggested that that number has been significantly exceeded in the 11 years since Saddam's fall. Iraq and the entire region have descended into chaos and anarchy, clearing the way for the radicalization fostered by Islamic State.

There are many reasons to be gratified by the end of a dictatorship. For one, it means that a criminal is no longer in a position of power. And there's the prospect that democracy could take root in its stead. Some people also believe that anything is better than despotism.

But that last belief is incorrect.

What Is the Role of the State?

The last decade has shown that there is something worse than dictatorship, worse than the absence of freedom, worse than oppression: civil war and chaos. The "failing states" that currently stretch from Pakistan to Mali show that the alternative to dictatorship isn't necessarily democracy -- all too often, it is anarchy. In the coming years, global politics will not be defined by the polarity between democratic and autocratic states as much as it will by the contrast between functioning and non-functioning ones.

Rule is order. For Thomas Hobbes, the father of modern political science, the intrinsic function of the state was to impose legal order in order to subdue the "state of nature." In "Leviathan," which he wrote in the 17th century under the shadow of the English Civil War, he argued that the state's monopoly on violence was legitimate when used to protect the lives and possessions of the state's citizens. When the state was no longer able to guarantee order, the threat of "war of every man against every man" loomed. The latter was the state of nature that the state, symbolized by the Leviathan, was tasked with taming.

In his 1525 article "Against the Murderous, Thieving Hordes of Peasants," Martin Luther also argued in favor of a severe sovereign putting a stop to the German Peasants' War. Luther was largely sympathetic to the complaints of the peasants, but he was turned off by the rampant violence and anarchy of their rebellion. The rebels, Luther wrote, should be dealt with "just as one must kill a mad dog."

Germany last experienced an extended period of anarchy almost 400 years ago during the Thirty Years' War. In the long period of peace and stability that has followed World War II, we in the West have come to view political continuity as the norm. During the decades of the Cold War, the threat to Western Europe did not come from weak states, warlords and terrorist organizations but from Communism. The era was marked by the confrontation between Western democracy and socialist dictatorship: The opposite of dictatorship was democracy.

The peaceful revolutions in Eastern Europe in the 1990s confirmed this view. In those countries, the collapse of the socialist dictatorships led not to anarchy but to the installation of a new, democratic order. This created the illusion that one merely had to remove obstacles for democracy to appear, almost automatically.

But in Russia the transition from the Soviet system to democracy failed. After the end of socialism, Russians were able to vote in more-or-less democratic elections and the economy was privatized. But the rule of law did not take hold. Instead, capriciousness and corruption gained the upper hand; power was monopolized by the strong. Chechnya began fighting for independence and the state started to disintegrate.

Such was the situation when Boris Yeltsin named Vladimir Putin prime minister in 1999. To Yeltsin, Putin, the head of domestic intelligence, seemed to be the only person capable of keeping the country together. Putin's task when he took over the Russian presidency a short time later was to return a crumbling state to functionality.

He was also being asked to lead a vast, sparsely populated country where state control had always been fragile: "Russia is large and the czar is far away," holds one Russian proverb. The specter of the "Smuta" -- a period of chaos and anarchy in the early 17th century -- continues to hang over Russian history. The iron-fisted Brezhnev era, by contrast, is considered by many in the country to be among the happiest periods in recent times.

In Yugoslavia, it also later became apparent that it is much easier to topple dictators than to establish democracies. Although a few weeks of bombing is generally sufficient to mortally wound autocratic regimes -- such as those run by Milosevic, Saddam, Gadhafi or Mullah Omar -- even in Europe, in relatively small territories such as Bosnia-Herzegovina and Kosovo, it took years to establish halfway stable countries with reasonably democratic governments.

The effort -- both in terms of money and labor -- was enormous. For years, control in Bosnia was largely in the hands of the High Representative in Bosnia and Herzegovina -- an office created by the Dayton Peace Agreement -- while in Kosovo, the United Nations ran the country.

The Importance of Stability

All of which raises the question: Is stability a value in and of itself? Those who answer in the affirmative are often seen as cynics who place little importance in freedom and human rights. But the uncomfortable truth is that dictatorship is often preferable to anarchy. Were people given a choice between a functioning dictatorship and a failing or failed state, the dictatorship would often be seen as the lesser evil. And most people believe that a more-or-less secure livelihood and a modicum of justice are more important than individual freedoms and unimpeachable democracy.

It is easy to label these kinds of attitudes as backwards from the comfort of a Western democracy. When I ask my Iranian friends why they don't rebel against the Islamic system they hate, they say they don't want a revolution because it might worsen the situation. And they know what they are talking about -- the last revolution in Iran was just 35 years ago.

Political instability triggers the yearning for order, sometimes at any price -- and thus often paves the way for extremists. That was true in Germany at the end of the Weimar Republic; in Russia, Stalinism followed the revolution and civil war; in Afghanistan, the period of unrest following the Soviet withdrawal spurred the rise of the Taliban. And now Islamic State has appeared in Iraq and Syria,.

That is why the swath of political instability stretching from Pakistan to Mali is so disconcerting. In Iraq, Syria, Yemen and Libya, central governments have lost control over vast portions of their territory and entire countries are becoming ungovernable. Tribes and clans are fighting with each other while warlords are exerting regional control -- at least, until they lose it again.

The failed democratization of Iraq and the unsuccessful "Arab Spring" in Syria have fed the rise of Islamic State. In neither of these countries does democracy currently have realistic prospects for success. The best solution for Syria -- and this is not cynicism speaking -- would perhaps be a military putsch against Assad. It would rid the country of its dictator while leaving the country's last center of power, the Syrian army, intact and able to resist Islamic State.

This kind of argument isn't particularly attractive -- smelling, as it does, of cool realpolitik. It is an admission of the West's impotence -- of its limited ability to export its values and lifestyle. It feels like a selling out of ideals. The argument is also often used to justify doing business with dictators and, even worse, provides dictators with justification for their own policies of oppression.

But that doesn't make it wrong. There are an increasing number of failed states in the world. According to the Fragile State Index assembled by the Fund for Peace, the number of states receiving a rating of "very high alert" or "high alert" has increased from nine to 16 since 2006. The spread of democracy and freedom, by contrast, has hardly made any progress. According to Freedom House, following a significant increase in the number of free countries at the beginning of the 1990s, there has been little change since 1998.

Democracy can only function in an environment where there is at least a minimum of stability. And it cannot necessarily establish this stability itself. In Iraq and Egypt, that process has failed, at least for the time being. In Afghanistan, the power of President Hamid Karzai, who made way for his successor at the end of September, never extended much beyond the city limits of the capital, Kabul, despite massive Western support. It is debatable whether the rudimentary rule of law established there after 13 years of Western involvement can survive ISAF's departure at the end of this year.

Free countries, as constitutional law expert Ernst-Wolfgang Böckenförde once wrote, flourish in conditions that they themselves are unable to guarantee. Without a cultural learning process -- like the one undergone by Europe over the centuries -- the toppling of a dictator and the holding of elections are not sufficient to establish democracy. As such, the West should value functioning states to a greater degree in the future.

Even as it longs to see the departure of autocrats in Russia, China, Central Asia and elsewhere, the alternatives must be seriously examined. And the next time an intervention is considered -- whether this means military force, sanctions, or the support of opposition powers -- the West must consider what will follow the toppling of the dictator. Indeed, that is exactly the argument US President Barack Obama used recently to justify his reticence to use force: "That's a lesson that I now apply every time I ask the question, 'Should we intervene militarily? Do we have an answer (for) the day after?'"

Hans Magnus Enzensberger now sees the toppling of Saddam and the Iraq War as an illustration for the fact that it is necessary every now and again to change one's opinion. At an August literature festival in Potsdam, he said that, with the opinion piece he wrote, he "fell heavily on my face."

For a reply to this essay, please click here. 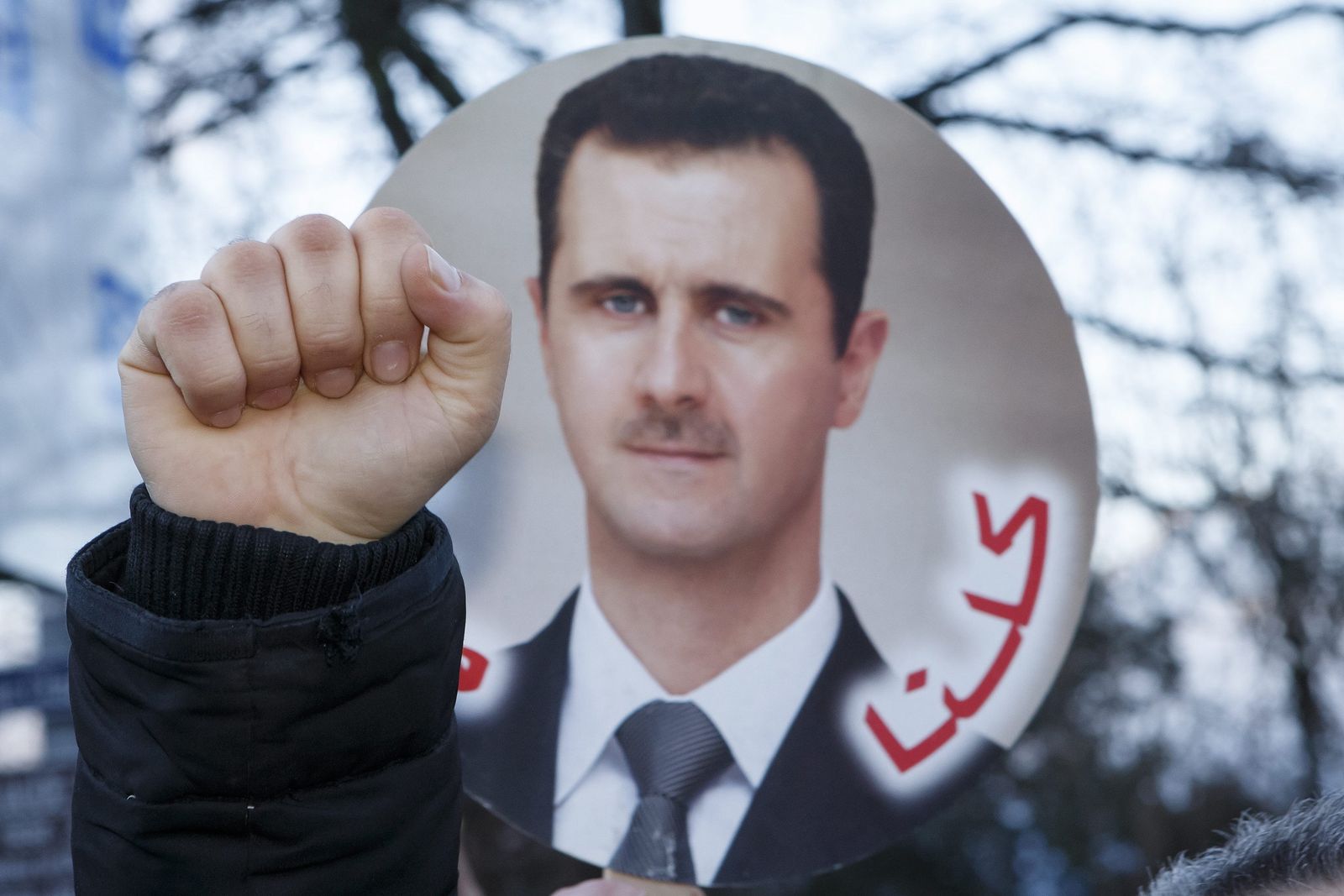 A sign with the face of Syrian President Bashar al-Assad at a protest in Geneva.