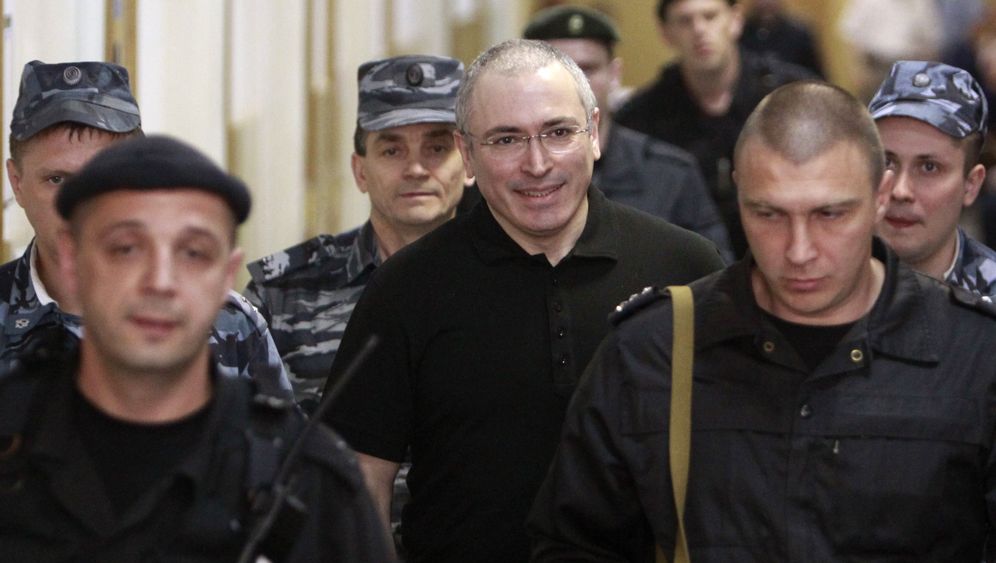 A few weeks ago, Maxim Dbar, the spokesman for jailed Russian oligarch Mikhail Khodorkovsky, was sitting in a Moscow café and talking about the former oil tycoon's current situation. Dbar said it boiled down to the old struggle between the hardliners surrounding Russian President Vladimir Putin and the relatively liberal politicians in Prime Minister Dmitry Medvedev's camp.

For months now, Russian judicial authorities have been preparing a third trial against the former magnate. The public prosecutor has also targeted German law professor Otto Luchterhandt, who has criticized the verdicts handed down against Khodorkovsky.

Then Dbar lowered his voice: "We have a glint of hope again." And he dropped another hint: "Ten years behind bars of course take their toll, even on a man with Khodorkovsky's enormous willpower and energy." It's very possible that Khodorkovsky's lawyers and closest aides already realized back then that he was about to abandon his long-standing policy of not seeking a pardon.

On Friday morning, Mikhail Khodorkovsky walked out of a prison camp in northern Russia a free man for the first time in a decade. Putin signed a decree pardoning him on the basis of "humanitarian principles," officially releasing the staunch Kremlin critic and former oil magnate who was once Russia's richest man. Hours later, Russian prison authorities reported he was being flown to Germany.

The decree came just one day after Putin made the surprise announcement that he planned to pardon Khodorkovsky following his marathon annual press conference on Thursday, adding that the prisoner had already submitted a request for his release. The news hit like a bombshell.

Kremlin critic and nationalist-communist writer Eduard Limonov called the upcoming release the "sensation of the decade." Sergei Guriev -- the former rector of Moscow's New Economic School who fled to Paris in April -- was also quick to comment on the news. "Khodorkovsky was released because Russia's image has continuously deteriorated lately," he said. There has been widespread speculation that Guriev will also be charged in a third trial against the oligarch.

The timing of Putin's announcement of the Khodorkovsky pardon is clever. For weeks now, he has been criticized for his handling of the situation with Ukraine. The United States and the European Union allege that the Russian leader exerted massive pressure on Kiev to reject an association agreement with the EU -- all in a bid to pull the neighboring country back into Russia's sphere of power. Critics say Putin's actions disregard the nearly 50 percent of Ukrainians who favor closer relations with Europe.

With his decision to release Khodorkovsky, Putin intends to show that he knows how to use not only the stick, but also the carrot -- and that the West's allegations that Russia is a profoundly undemocratic country do not line up with reality. Given this situation, it's not surprising that Putin has explicitly pointed out that he was moved to issue the pardon by humanitarian concerns: In his speech, he cited the critical condition of Khodorkovsky's 78-year-old mother.

Svetlana Bakhmina, a former legal executive who worked for Khodorkovsky and has herself spent four years in prison, confirmed on Thursday that the poor health of his mother "is the only possible reason Mikhail could have asked for a pardon. Nothing else could have forced him to yield."

The seamlessness between Putin's announcement and his signing of the decree probably indicates that the president himself is pulling the strings when it comes to Khodorkovsky's fate. This approach is reminiscent of the case of prominent opposition politician and blogger Alexey Navalny. In July 2013, Navalny was convicted of embezzlement by a court in Kirov and sentenced to five years in prison, effectively making him ineligible to hold any political office. One day later, he was surprisingly released, and was later even allowed to run in the Moscow mayoral election.

Putin had a major hand in that decision, as well. He had arranged the pardon of sorts with Moscow's incumbent mayor to take the wind out of the sails of the opposition and Western critics. Putin publicly stated he found Navalny's initial verdict "strange," because a co-defendant had received a suspended sentence, but not Navalny. The intervention suggests there must have been divergent opinions on this issue among the Kremlin elite.

It now appears to be a similar story with Khodorkovsky. Less than two weeks ago, on Dec. 7, the Russian news agency Interfax reported that there were plans for a new, third trial in which the former oligarch would be accused of money laundering. The case involves $10 billion (€7.3 billion) that Khodorkovsky's team allegedly illegally channeled to foreign accounts.

The news agency cited Deputy Prosecutor-General Alexander Zvyagintsev, who said he had six binders filled with evidence of this crime and "good prospects" of taking Khodorkovsky to court a third time. At Thursday's press conference, Putin suddenly said that he, "as an individual who observes these things more as an outsider," sees "no particular prospects" of trying a third case against Khodorkovsky.

It is highly unlikely that the deputy prosecutor-general acted on his own. His office has pursued the investigations with Putin's full knowledge. But the Russian leader has apparently decided it is more advantageous to use the former oligarch for a prominent political pardon.

Putin's Friday decree, and especially his performance on Thursday, were intended to show that after his foreign policy successes he has regained control of the situation on the domestic political front. Forgotten are the allegations of electoral fraud in the wake of the last Duma elections in 2011, along with the subsequent mass demonstrations, which overshadowed his own reelection in 2012. Forgotten are also all questions about his health.

And, of course, the announcement immediately sparked wild speculation in Moscow. It was rumored that Putin was breaking free of the Siloviki, a network of current and former security service officers in Moscow who run Russia's intelligence, military and law enforcement agencies. Their figurehead since Putin's arrival in the Kremlin in 2000 has been Igor Sechin, a long-time close Putin ally from St. Petersburg. Sechin managed to transfer a majority of the assets of Khodorkovsky's defunct Yukos oil empire to Rosneft, the government-owned oil company of which he is chairman.

Sechin has always insisted that the Yukos affair was not only "about tax offenses, but also serious capital crimes like murder, torture and blackmail." Such charges were intended to put Khodorkovsky behind bars for many more long years. Now it appears that Sechin's influence is waning.

It remains to be seen whether deals were made between Khodorkovsky and the Kremlin as a precondition for his pardon -- and whether the former oligarch has agreed to refrain from all political activity after his release, especially as an opponent of the Kremlin. There are also persistent rumors surrounding Navalny. Critics say the opposition politician struck a deal with the Russian leadership so they would leave him alone.

In any case, Khodorkovsky had indicated that that he eventually wants to play a political role again. Reading between the lines in the two years of correspondence with SPIEGEL, though, it sounded as if he had lost hope of ever being released. "Over the past few years, I have come to understand the logic of the system and no longer indulge in senseless dreaming," he wrote in August 2011.

Khodorkovsky later philosophized that his life follows 10-year cycles. On June 26, 2013, he celebrated his 50th birthday behind barbed wire in a labor camp on the Finnish border. In retrospect it looks as if both he and Putin may have finally come to the conclusion that it is time to put an end to the endless standoff.

On Thursday evening, all of Moscow was abuzz with speculation about what Khodorkovsky will do with his freedom: Will he go into exile abroad, and is this part of a deal made with the Kremlin? Or will he demand the return of the Yukos oil company? Or will he perhaps place himself at the head of the political opposition to Putin?

"My ambition does not lie in the struggle for power. Throughout the course of my life, I've satisfied my hunger for that," the industrialist wrote in a letter to SPIEGEL in 2012.

"But I intend to fight for basic values like personal freedom and human rights," he insisted. "This will be the focus of all the time that fate and my family allows me."