So what is it that Russia wants? It wants to expand its influence in the Middle East and Eastern Europe and it wants to once again be on equal footing with the United States on the international stage. As recent events have shown, President Vladimir Putin is willing to use almost all means necessary in the pursuit of this aim. Russia doesn't even shy away from conducting airstrikes on residential areas in Syria, bombing hospitals in the process. It is likewise forcing the Sunni population to take flight, thereby increasing the flow of refugees and destabilizing Europe and Turkey. It has become obvious that Russia is not a partner to the West, not even, as some had hoped, in fighting the Islamic State.

On the contrary, Russia has become a destructive actor.

Hardly anything did more to irritate Russian leadership than the statement made by US President Barack Obama in 2014 that the country was no more than a "regional power." Ever since, Russian President Vladimir Putin has been working tenaciously to prove the opposite. When Prime Minister Dimitry Medvedev speaks of a "New Cold War," as he did a week ago at the Munich Security Conference, it is representative of precisely this claim to importance. For there to be a New Cold War, there must be two opposing parties of equal strength.

It is surely no coincidence that Medvedev uttered his words in Germany, where fears of a confrontation with Russia run especially deep. With his choice of words, the prime minister is pursuing the same goal as the Russian fighter planes that are shadowing German Tornado reconnaissance jets over Syria or operating near the air space of NATO member states. They are gestures aimed at intimidating the West against trying to counter Russian aspirations to power.

But today's Russia is not the Soviet Union. The country may have beefed up its military in recent years, but economically it remains relatively insignificant. Sanctions and the low oil price have thrown the country back even further. The fact that we are nevertheless being forced to reckon with Russia is solely the product of the determination and strategic savvy of the Russian leadership -- and the failure of the West. Ultimately, Russia is only as strong as the West is weak. Europe and the United States have no answer to Putin's aggressive approach because they themselves have no clear strategy. They are incapable of even agreeing on common goals.

Just take Syria. Two years ago, the US refrained from establishing a no-fly zone in the northern part of the country or providing massive support to those moderate rebels who were fighting against both Syrian President Bashar Assad and Islamic State. Doing so would have been perhaps the most effective measure in preventing the mass flight we are seeing now.

Russia, on the other hand, has a very clear aim: It wants to keep the mass-murderer Assad in office and strengthen his regime. It's a goal that Moscow is pursuing with few scruples.

The West, for its part, is now out of cards to play to apply pressure on Putin, and we will instead have to resign ourselves to the fact that Syria will remain a failed state, under Assad's leadership. Ukraine, which enthusiastically turned to the West two years ago, is also on the verge of being lost, with the corrupt elite and the war in the east making life difficult for reformers. There, too, Russia has a clear goal -- that of destabilizing the country -- and it is deploying weapons and soldiers to realize that aim. The West, on the other hand, lacks the resolve needed to back Ukraine.

The Kremlin's threats, the strategic defeats against Putin and the fear of an armed conflict are now strengthening those in the West who wish to settle with Russia, no matter how high the price. Some German politicians would like to see sanctions against Russia lifted without getting anything in return. The latest trip by German politician Horst Seehofer -- governor of economic powerhouse Bavaria and the most vocal detractor of Merkel's refugee policies despite his Christian Social Union party being allied with her Christian Democrats -- also created the false impression that everything can be resolved by just exchanging more dialogue with Russia and voicing less criticism, ignoring the fact that a lack of talk is not the problem. With his visit and his cozying up to Putin, he allowed himself to become a cog in the wheel of Russia's propaganda machine.

The lessons from Syria and Ukraine are that the opposite is true: All attempts to move Russia through rapprochement and flattery have failed. The only thing that will impress Putin and move him to cooperate is credible pressure from the West. In Ukraine, he hadn't expected the harsh sanctions imposed by the West -- and it was only through those punitive measures that further Russian aggression could be stopped. Such clarity, however, has been missing when it comes to Syria. On the contrary, some Western politicians, unfortunately, even welcomed Putin's intervention.

This lesson is important. The West has underestimated Russia and must expect further foreign policy adventures from Moscow, be it in Eastern Europe or in its already tense relationship with Turkey. Putin needs these adventures in order to maintain his popularity, even though his own people are becoming poorer. If the West wants to avoid being outmaneuvered again in future conflicts, it cannot allow itself to be intimidated -- and neither can it strive for appeasement. The West must counter these attacks on the world order in a united way. 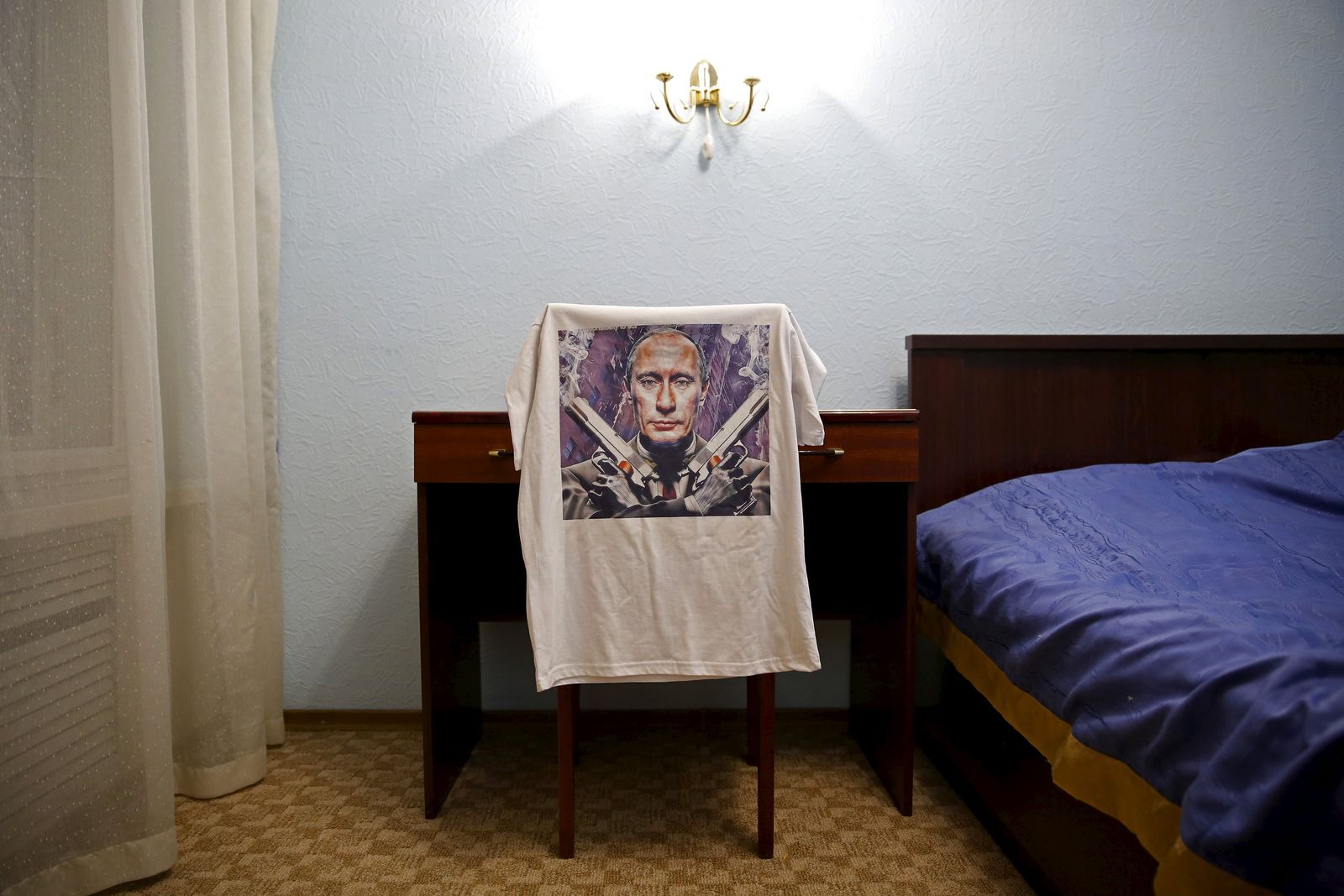 A T-shirt depicting Vladimir Putin: Russia is only as strong as the West is weak.