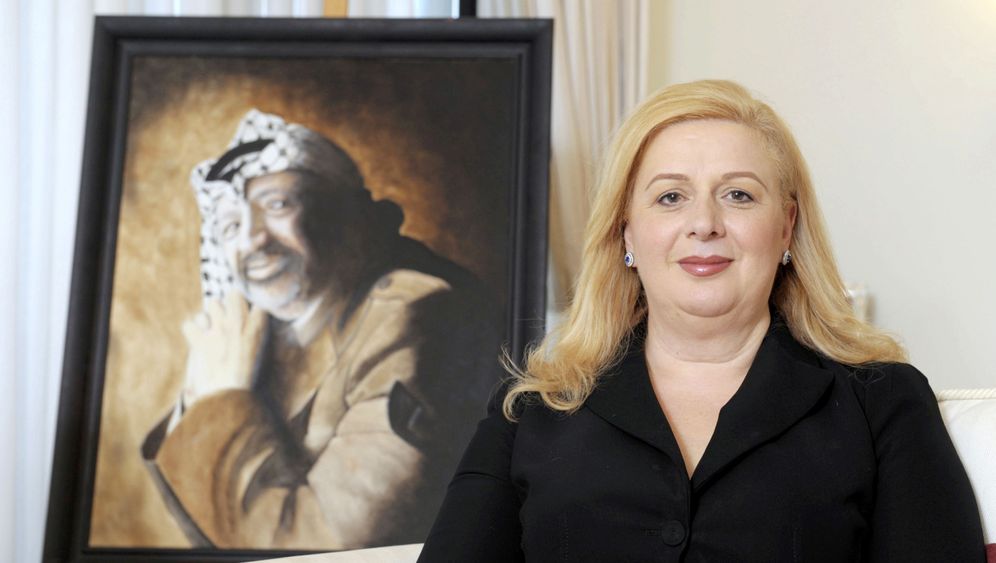 Suha Arafat says she knew it all along. Someone like Yasser Arafat doesn't die so easily because his body suddenly gives up, even if he was 75 years old. Someone like him had to have been killed, poisoned or exposed to radiation, whether from enemies or rivals. Though many have suspected the same thing, there has never been any proof. Eight years after the death of the legendary Palestinian leader, it looked like things would stay that way.

But then, two months ago, the Institute of Radiation Physics based in Lausanne, Switzerland, announced that it had found a potential contamination with a fatal amount of polonium-210 on Arafat's underwear, toothbrush and hat. The radioactive heavy-metal isotope is tasteless and almost undetectable. A dose of 0.1 micrograms is already fatal.

Suha Arafat, his now 49-year-old widow, had submitted the test samples with the assistance of al-Jazeera, the Qatar-based television network. Since then, what had been for years merely a conspiracy theory has become a bona fide criminal case -- especially since Suha Arafat lodged a criminal complaint and French prosecutors launched a murder investigation last week.

'We Will Finally Learn the Truth'

The women who put this all in motion is hard to locate. It even took the taxi driver a long time to arrive via winding roads at Suha Arafat's home in Malta, a half-hour by car from the capital city of Valletta. The unimposing house on a hillside has a front garden which is too small for parties. A compact Korean-made car is parked out front.

Suha Arafat has lived here with her mother for over two years. Her 17-year-old daughter, Zahwa, attends a boarding school in France.

The widow opens the door wearing a dress and flat shoes. She looks much more like a housewife than the supposed she-devil the Palestinians have hated since her husband, who they think should have only been wed to the Palestinian cause, married her -- a Muslim convert who was born a Palestinian Christian in Jerusalem and raised Catholic -- in 1990. But, more than anything, she has been hated since 1995, when she moved from the Gaza Strip to Paris because she found life there more comfortable.

Suha Arafat talks about the suspicion she has carried with her since Oct. 12, 2004. That was the day when Arafat's illness reportedly began, when he had diarrhea and complained of stomach pains and dizziness. The symptoms quickly worsened and left him as thin as a rail. Finally, wearing a training outfit and a wool cap, Arafat was taken from the West Bank town of Ramallah to a military hospital near Paris, where he died on Nov. 11. Already then, many thought that the death seemed unnatural.

During a recent studio interview with al-Jazeera, a choked-up Suha Arafat demanded an investigation. Now, sitting in her living room, where a portrait of Arafat hangs on the wall, she feels she is finally approaching her goal. "I am very confident," she says, "that the entire case will reach a positive end in very little time and that we will finally learn the truth." This is not wishful thinking, she adds, noting that there are reasons for being so optimistic.

Since polonium-210 has a half-life of 138 days, things need to proceed quickly. Therefore, Arafat's body will be examined in the coming weeks, believes Saad Djebbar, one of Suha Arafat's lawyers in Paris. In a television interview, he said that the French legal system has jurisdiction because the murder began in the Palestinian territories and ended in France. He then added the curious sentence that Suha Arafat wants to prevent the Palestinian Authority from obstructing the investigation.

The Missing Piece of the Puzzle

This is a charge that enrages Tawfik Tirawi, Arafat's former intelligence chief, because it is also directed against him. For the last two years, Tirawi has headed the official Palestinian commission charged with investigating the cause of Arafat's death. Since the scandal involving possible polonium poisoning erupted, he has been repeatedly forced to explain why it was al-Jazeera, rather than him, that came up with the idea of taking a closer look at Arafat's underwear.

During the three years leading up to his death, the Israeli siege prevented Arafat from leaving the Mukataa, his government headquarters in Ramallah. In that period, Tirawi encountered Arafat on an almost daily basis. "I saw very clearly how things got increasingly worse with him," he says. "At first, he had spots on his face. Then, he was constantly throwing up, he lost weight, and the skin on his feet dissolved so that he could only wear sandals." Then he adds: "We were always certain that the Israelis had poisoned Arafat."

As Tirawi sees it, it was just an accident that al-Jazeera discovered the last missing piece of the puzzle. He claims that his commission has tirelessly investigated the case, but that its activities have been secret because such things are obviously kept out of the public gaze. Although he is either unwilling or unable to discuss the commission's findings, he will say that it has been quite successful.

Not only Suha Arafat, but also many Palestinians in Ramallah see things differently. They believe that Palestinian Authority officials never made any real effort to solve the mystery surrounding his death. The first investigative commission was dissolved six months after Arafat's death and only reappointed in 2010.

In all of this, the Palestinians had good cause for looking into things more closely. After all, the French clinic's 558-page report on the death of their national hero raises more questions than it provides answers. For example, why did Suha Arafat refuse to allow a liver biopsy to be taken? Why didn't anyone demand that an autopsy be conducted? How can it be that even the best doctors in France didn't find the cause of this strange infection, which caused blood to coagulate and led to a stroke? Could it be that the French government wants to keep the cause of death secret?

Moreover, why is there so much missing in the report, and why does it seem like "someone has played around with it," as Avi Issacharoff, a reporter with the Israeli daily Haaretz, says? Likewise, he also finds it somewhat odd that he, an Israeli journalist, was the only one to publish the secret French medical report, rather than Suha Arafat or the Palestinian Authority.

There are many inconsistencies and many rumors. They start with the allegation that Arafat died of AIDS or that Arafat's rivals poisoned him, and there are many more. Still, in the search for a motive to murder Arafat, it is hard to ignore Israel.

In 2002, then-Prime Minister Ariel Sharon told the Israeli newspaper Ma'ariv that he regretted not having killed Arafat when Israeli forces invaded southern Lebanon in 1982. In 2003, then-Deputy Prime Minister Ehud Olmert said that murder was an option for getting rid of Arafat. But is that any proof?

When asked about this, Israeli officials say: "It has nothing to do with us." For example, Dov Weissglass, who was the bureau chief of then-Israeli Prime Minister Ariel Sharon, says: "We didn't kill Arafat when the terror had reached its high point, so why would we kill him in 2004, when he was sitting isolated in the Mukataa and his political influence was already waning?"

Still, polonium-210 is not something one finds at the grocery store. There are only a few countries that can make it, and doing so requires a nuclear reactor. What's more, Israel reportedly had some polonium in the past.

Another question is: Why is all of this coming out now, eight years after Arafat's death and six years after the death of Alexander Litvinenko, the former KGB agent and Kremlin opponent, who became the first well-known victim of a polonium poisoning attack?

The Search for the Truth

Suha Arafat says she is driven by the search for the truth. But it might also have something to do with the fact that, in addition to being widely despised in Ramallah, she has also fallen into disfavor in France and Tunisia, where she is under investigation for suspicious cash flows and corruption. There is also the persistent rumor that she had a hand in the disappearance of $300 million (€240 million) after Arafat's death. In any case, it would certainly seem opportune for her to now assume the role of the widow avenging her husband's death in the name of the Palestinian people.

Enthusiasm for the investigation is more tempered in Ramallah, partly because some people there suspect al-Jazeera of wanting to help topple Palestinian President Mahmoud Abbas. But, of course, Palestinian officials also realize that they can take advantage of the search for Arafat's alleged murderer. At the moment, there are no peace talks with Israel, the economy is in a slump and there continue to be deep divisions between Hamas and Fatah, the rival Palestinian groupings ruling the Gaza Strip and West Bank, respectively. Under these circumstances, it would be a perfect time to have news of a poisoned martyr to deflect from the political deadlock and disorientation.

For these reasons, the debate might say more about the Palestinians' situation today than about Arafat's death. "To this day, we have avoided accusing Israel of being responsible for Arafat's death," says Nimr Hamad, Abbas' political adviser. "But if we find polonium in his body, it is 99.9 percent certain that it was Israel. That would help us because it proves that Israel doesn't want peace." He adds that they would demand the appointment of a special tribunal "like the one that was supposed to explain the death of former Lebanese Prime Minister Rafik al-Hariri. But the evidence is clearer in Arafat's case than it was in Hariri's."

When asked what the situation for Palestinians would be like if Arafat were still alive, General Tirawi guardedly says: "The situation would presumably be more difficult." Nimr Hamad, on the other hand, only smiles. There is hardly anyone these days who would want Arafat to still be president. Indeed, most of the formerly ubiquitous images of Arafat's face on the streets have disappeared.

These days, one can't even visit Arafat's mausoleum on the edge of the Mukataa. The entrance is full of rubble and men are pushing wheelbarrows. This is the last work going on in the effort to transform Arafat's formerly bullet-riddled headquarters into a smart-looking official seat of government.

"Not finished," says a security guard, shooing visitors away. The wreaths have been cleared away, and the honor guard is somewhere else. Within the cube-shaped mausoleum, there is just a single memorial stone above a burial vault housing a coffin. That coffin holds not only Arafat's body, but also the secret behind his death -- though perhaps not for much longer.