SPIEGEL ONLINE: Mrs. Bout, your husband has been sitting in a Bangkok jail for more than two years. The US authorities suspect him of illegal arms deals.

Alla Bout: The whole case against Viktor here in Thailand is a farce. My husband hasn't committed any crime. He was lured into a trap, and is supposed to be extradited to a country he has absolutely nothing to do with.

SPIEGEL ONLINE: Nevertheless, he is supposed to have stated that he would be prepared to deliver weapons to FARC, the Colombian guerrilla group.

Bout: So what? He didn't even have these missiles. And, what's more, he wasn't negotiating with FARC when he was arrested in a Bangkok hotel room but rather with American narcotics agents from the DEA (Drug Enforcement Agency), who initiated the whole so-called deal. It is just absurd to take someone who doesn't own any weapons and who isn't talking with any guerrillas to be extradited to a country he's never been to because of a crime he never committed. Viktor has never been in the United States or Colombia in his entire life. In fact, he's only been in the Americas twice, and that was to Argentina and Brazil.

SPIEGEL ONLINE: So, why was he arrested in Thailand?

Bout: I assume that the Thais wanted to ingratiate themselves with the Americans.

SPIEGEL ONLINE: Your husband is considered by the UN and the US government to be an unscrupulous arms dealer. Hollywood has even made the film about certain episodes in your husband's career starring Nicholas Cage.

Bout: That's all nonsense. Viktor has never traded weapons. He only ran a transportation company. He's a good businessman, that's all.

SPIEGEL ONLINE: What line of business did your husband make his money in then?

Bout: He traded anything that made money. In the early '90s there was hardly anything in Russia. Viktor would buy stuff in the Czech Republic, for example, and sell it in Russia: beer, children's clothes, recorders, tapes, everything.

SPIEGEL ONLINE: You never heard anything about arms deals in Africa?

Bout: No. In Africa, he was primarily transporting food and animals. Elephants, ostriches, I don't know what exactly. It's not an easy business but Viktor managed it. He always had an idea, a plan.

SPIEGEL ONLINE: And during the '90s you lived in Sharjah, one of the United Arab Emirates.

Bout: In 1993 everything there was still underdeveloped and dirt cheap. Viktor had started a small company that had two rooms and three employees. The emirate was a duty-free zone. A lot of goods arrived there from Asia, and Viktor's clients would commission him to bring them to Russia. He was a simple businessman in the transportation trade. There are very strict laws in the Emirates and pretty much no corruption. It's unthinkable that Viktor had shady dealings there.

SPIEGEL ONLINE: They say, however, that Viktor Bout even did business with the Taliban.

Bout: No. There was one time he flew out the Russian crew of an Ilyushin 76 plane that had been hijacked by the Taliban. This must have been 1995 or 1996. The crew had been able to overpower the hijackers and three captive Taliban members were on board his plane. Viktor flew them to the Emirates and turned them over to the police there. And Russia would anyway never have let him get away with doing business with the Taliban. These Islamist fighters have always been Russia's enemies.

SPIEGEL ONLINE: Why is the Russian government doing so much to help your husband? The Foreign Ministry has even sworn to bring him back to Russia.

Bout: He's a Russian citizen. And he's not a wanted man in Russia.

SPIEGEL ONLINE: Why couldn't the Russians manage to get your husband flown to Moscow?

Bout: Their influence is undoubtedly not as big as that of the United States. Or could you really imagine the tables turned: an American being lured into a trap by Russian narcotics agents in Thailand and being arrested for allegedly intending to commit a crime?

SPIEGEL ONLINE: What was your husband doing in Thailand anyway? Was it not careless to travel to Bangkok?

Bout: We're always wiser in retrospect. In recent years he had rarely traveled, just to Montenegro, Armenia and China. He had come to Thailand with someone he thought was his friend. They wanted to vacation here. But this friend was apparently cooperating with the Americans and lured him into the trap.

SPIEGEL ONLINE: Your husband is currently being held in the so-called "Bangkok Hilton," a notorious prison in the Thai capital. He has lost a lot of weight. How is he dealing with his time in jail?

Bout: Lately, he's been kept in a small, 2-meter-by-2-meter cell. He is always being monitored by three cameras: one above his bed, one above the toilet and one in the corner. And -- allegedly to guarantee his safety -- they emptied out the whole wing. Some Russians who are imprisoned there for robbery testified that someone had hired a killer to get rid of Viktor. From that point on, he has been kept in isolation. We talk through a glass panel now.

SPIEGEL ONLINE: If your husband is, as you say, innocent then why has he been so doggedly pursued by the UN and the US government?

Bout: It started with a report by a Belgian named Johan Peleman, who accused my husband of delivering weapons to various warring parties, such as UNITA in Angola or Charles Taylor in Liberia. After that, everyone started copying what everyone else had written and it set off an avalanche. Suddenly my husband was a monster. Even journalists who had spoken to him before started making up stories. Then this movie with Nicolas Cage, "Lord of War," came out. We didn't know what had hit us.

SPIEGEL ONLINE: 2001 was something of a watershed year for your husband's career.

Bout: That's when the World Trade Center was attacked. Since then the Americans have been a bit crazy. They were looking for someone to blame, a scapegoat, and a Russian arms dealer suited perfectly. Viktor simply fitted the bill. When they talked about Viktor, they could forget even Osama Bin Laden for a moment.

SPIEGEL ONLINE: A Thai government emissary is reported to have visited your husband in prison in Bangkok.

Bout: This man, Sirichok Sopha, came on a Sunday, although it's not a visiting day. The prison director arranged it. Sopha is essentially Prime Minister Abhisit Vejjajiva's right-hand man. The first thing he asked my husband was how many KGB agents are stationed in Bangkok -- but Viktor never worked for the intelligence agency. Next he wanted to know if Viktor had any ideas about how to catch former Thai Prime Minister Thaksin Shinawatra. Viktor said he had no idea. He has never been interested in politics. Then the man showed him a photograph of Thaksin's private plane, which is registered in the US. Viktor said he would really be better off asking his American friends for advice. 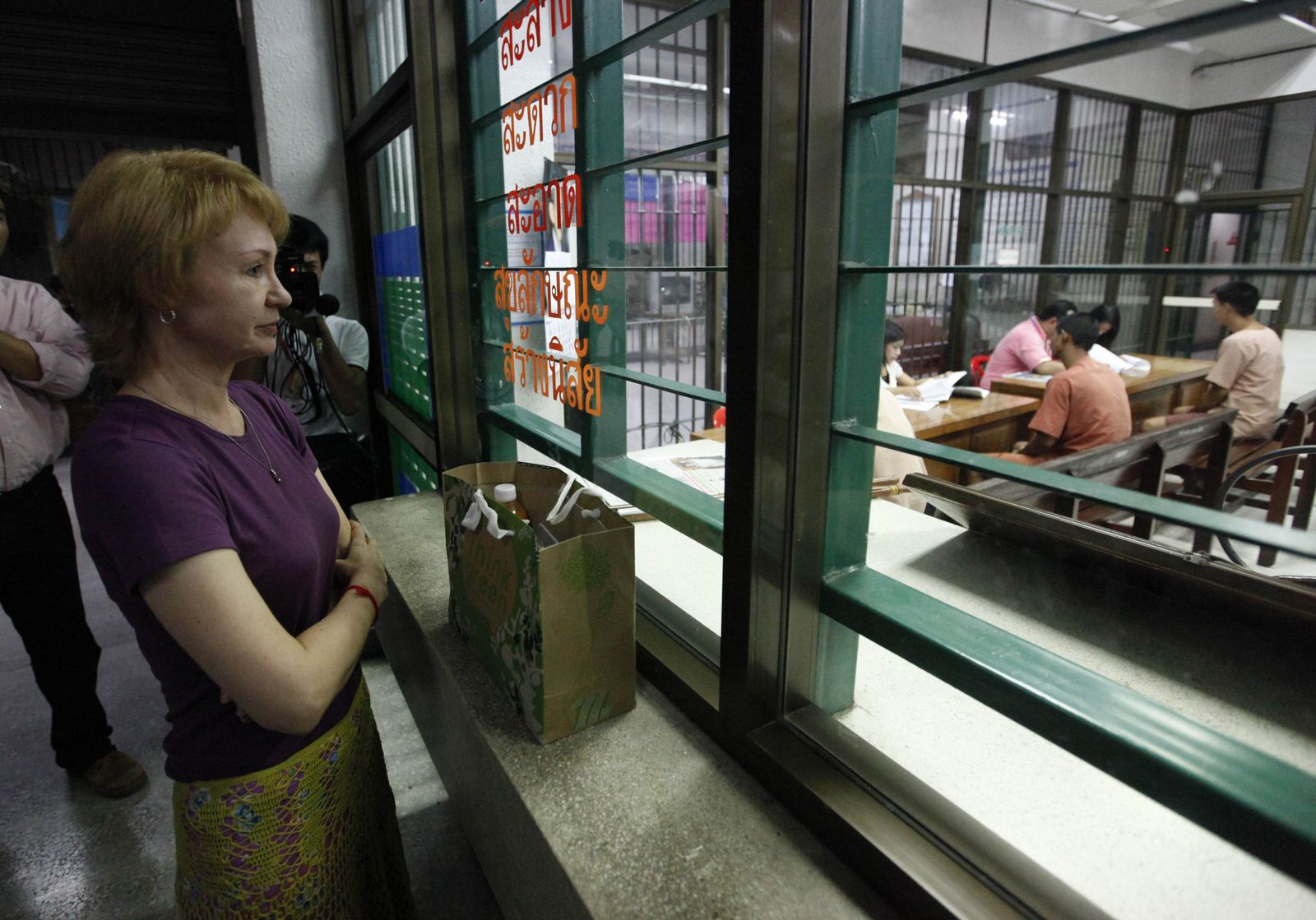 Alla Bout brings a bag of food for her husband at the criminal court in Bangkok, Thailand.