Why do we need freedom of the press? The framers of the United States Constitution believed that such a guarantee would be unnecessary -- if not dangerous. There are freedoms that we don't secure through promises, but which we take for ourselves. They are like the air we breathe in a democracy, whose authority is built on public opinion. The democracy that was founded on the basis of such insights is the American democracy. It is an indication of the American revolutionaries' healthy mistrust in the power of this insight that they would later incorporate freedom of the press into the US Constitution after all.

Today, more than 200 years later, this old idea seems naïve to all too many people in the Western world. Since becoming embroiled in the war against terrorism, the US government has transformed itself into a huge security apparatus. The Washington Post recently reported that 854,000 people in the US government, or more than one-and-a-half times the population of Washington, DC, hold top-secret security clearances -- and this under a president who came into office promising a new era of openness in government. An estimated 16 million government documents a year are stamped "top secret," or not intended for the eyes of ordinary citizens.

In the crisis, the countries of Old Europe are also putting up the barricades. Germany's constitution, known as the Basic Law, has a far-reaching guarantee of press freedom and was created after World War II on behalf of the US liberators and in the spirit of the American and French revolutions. But in the 10th year after the 9/11 attacks, one German conservative politician has even pondered whether it might not be a good idea to prohibit journalists from reporting on terrorism in too much detail.

But then along comes someone who is still playing the part of the revolutionary. Julian Assange, the founder of the whistleblowing platform , is playing with the fire of anarchy. He is constantly threatening new, increasingly dangerous disclosures, which should indeed be of great concern to those affected. But the hatred he reaps in return is beneath all democracies.

In countries that have enshrined the right to free speech in their constitutions, it has until now been taken for granted that disclosures of confidential government information must be measured by the yardstick of the law. Disseminating real government secrets has always been against the law, including in Germany. The journalist Rudolf Augstein, SPIEGEL's founding father, paid for the mere suspicion of having exposed state secrets by spending 103 days in custody in 1962, in relation to a SPIEGEL cover story on the defense capabilities of the German military. But because the courts abided by the law, and freedom of the press was ultimately considered to be worth more than politicians' outrage, it wasn't the press but the government that felt the heat.

But for those who have it in for Assange, it's more a matter of principle than of enforcing the law. The loudmouth from Australia offers a welcome opportunity to finally cast off the old ideas of press freedom as a right that we grant ourselves instead of allowing others to grant it to us. Aren't we all at war? Isn't it the case that citizens must, in fact, protect the state instead of spying on it?

The trans-Atlantic coalition of protectors of the state includes such diverse participants as the chairman of the US Senate Committee on Homeland Security, Joe Lieberman, who accuses anyone who publishes secret US diplomatic cables of "bad citizenship," and German Green Party Chairman Cem Özdemir, who says that WikiLeaks has "crossed a line that isn't good for our democracy." The need to portray oneself as a good citizen is particularly strong among certain journalists. Even the Süddeutsche Zeitung, which normally takes civil rights very seriously, chides that the WikiLeaks disclosures "destroy politics, endanger people and can influence economies." American journalist Steve Coll, who was awarded the Pulitzer Prize for his own exposés, rages against the activities of WikiLeaks, calling them "vandalism" and "subversion." The Washington Post, whose reporters Bob Woodward and Carl Bernstein once exposed the Watergate affair, describes WikiLeaks as a "criminal organization."

To critics, the most threatening aspect of WikiLeaks' "criminal" activities must be the fact that, so far, no one has managed to find a law that these whistleblowers have actually broken. The US Justice Department's attempt to invoke the controversial Espionage Act of 1917 shows how helpless the protectors of the law are as they flip through their tomes. The period of World War I was a dark time for constitutional freedoms in the US. In its practically hysterical fear of communists and all other critics, the judiciary even prosecuted people who distributed flyers critical of military service, and in doing so ignored all constitutional guarantees.

Even the post 9/11 period wasn't quite as bad. In 2005, when the New York Times planned to publish a story about an illegal global wire-tapping program operated by the US National Security Agency (NSA), the paper's senior editors were summoned to the White House to meet with then Secretary of State Condoleezza Rice. The most powerful government in the world was forced to resort to moral pressure. Apparently no one knew of any legal justification for the government to bar the Times from going to press. Of course, the newspaper did ultimately publish what it had learned. Nevertheless, America survived.

Or was it the other way around? Did America survive precisely because the New York Times published what it knew?

The Importance of Ethics

A few days ago, Congressional legal experts issued a report warning against dusting off the Espionage Act, arguing that it isn't quite that easy to apply the prohibition on disclosing secret government information to hostile powers to disclosures in the press.

The only remaining option is to challenge the right of Assange and his much-feared organization to claim protection under the Constitution as members of the press. Should every hurler of data be afforded the same political status as the New York Times or SPIEGEL? Isn't it true that what legitimizes the work of the press is the responsible handling of data, as well as the acts of considering the consequences, applying emphasis and explaining the material?

That's the way it should be. The ethics of journalism is what makes the products of the press credible to readers. This is just as applicable to SPIEGEL as it is to its counterparts in New York and Washington. In fact, it should apply to anyone who deals with sensitive data. However, a look at the beginning of the story shows that no one but citizens themselves -- that is, the readers -- can answer the question of whether the standards were adhered to. The worst penalty they can impose is to simply not read a newspaper or a collection of data on the Internet.

WikiLeaks is as much an intermediary for the public sphere as every newspaper and every website. For Berlin constitutional law expert Dieter Grimm, it is clear that the whistleblower website enjoys "the protections for freedom of the press under Germany's Basic Law." As a judge on the German Constitutional Court in Karlsruhe, Grimm played a very important role in shaping the current interpretation of freedom of opinion and freedom of the press in Germany. The Constitutional Court itself has consistently emphasized that the task of disseminating information in an unimpeded manner is "clearly essential" to the functioning of a democracy.

There is no good or bad public sphere, just as there is no such thing as a bit of a public sphere. According to the German Constitutional Court, it is only the full- fledged ability of all citizens to have access to all information, at least in principle, which makes the formation of public opinion possible. And it is the unobstructed formation of public opinion that makes it possible to view the outcome of elections as being representative of the will of the people.

The answer to both questions is very simple: Yes.

State Has No Private Sphere

Naturally the government is permitted to have secrets. It is part of the prudent behavior of every civil servant to prepare decisions in confidence, so as to prevent unauthorized individuals from thwarting the desired outcome in advance. This is no less applicable to the planning of foreign ministers' conferences than to plans to apprehend terrorists.

That's why it is also part of the responsibility of all politicians, civil servants and judges to keep an eye on sensitive information, as the case arises. This is all the more important because the government cannot depend on being able to operate in legally protected darkness. The state's privacy, as such, is not legally protected, and the state, unlike its citizens, has no private sphere. The rights of citizens deserve protection, but the government's internal affairs do not.

Only one politician in Berlin, Christian Ahrendt, the legal policy spokesman for the liberal Free Democratic Party's parliamentary group, had the courage to put the unpopular truth into words: "If government agencies don't keep a close eye on their data, they can't hold the press responsible after the event."

The Quality of a Democracy

This is difficult to comprehend, even for interior ministers, which is why Germany needed, once again, a decision from the Constitutional Court explaining the difference between breach of secrecy and disclosure. When the editorial offices of the magazine Cicero were searched in 2005, with the approval of then Interior Minister Otto Schily, because the magazine had reported on a confidential Federal Criminal Police Office (BKA) dossier, the investigators used a complicated argument to justify their charge against the editor responsible for the story. They argued that, although there is no specific law banning the publication of confidential official documents, it is a punishable offence for the BKA agents responsible for taking care of such documents to leak them. This meant that the journalist in question was an "accessory" to a punishable offence, if only by accepting the documents. And being an accessory to an offence is also an offence.

The Constitutional Court rejected this argument, noting once again the "absolutely essential importance" of press freedom for democracy. The press is allowed to print what it has obtained. With the very narrow exceptions in the realm of treason, this rule must apply in the press's handling of government secrets.

The case of Valerie Plame, the wife of an American diplomat who was exposed as a CIA agent by the syndicated columnist Robert Novak, shows that it is also firmly applied in the United States. It is a crime in both the United States and Germany to expose an agent of one's own government. But in the Plame case, reporters were only called to testify as witnesses. It was the government source, and not the reporters themselves, that was being prosecuted. Nevertheless, a journalist, Judith Miller, was arrested and spent three months in jail for refusing to reveal her sources. Even this sanction would be unthinkable in Germany, where journalists have the right to refuse to give evidence. Under the Basic Law, journalists, in the interest of the free disclosure of secrets, must even have the right to protect government sources.

In Germany, it was former Constitutional Court Judge Grimm who declared that a free press serves a constitutional purpose. This is not meant in a restrictive way, but entirely within the meaning of the framers of the US Constitution. If the state derives its democratic authority from citizens having comprehensive information, then providing information becomes a civic duty. And breach of secrecy becomes a mark of the quality of a democracy. 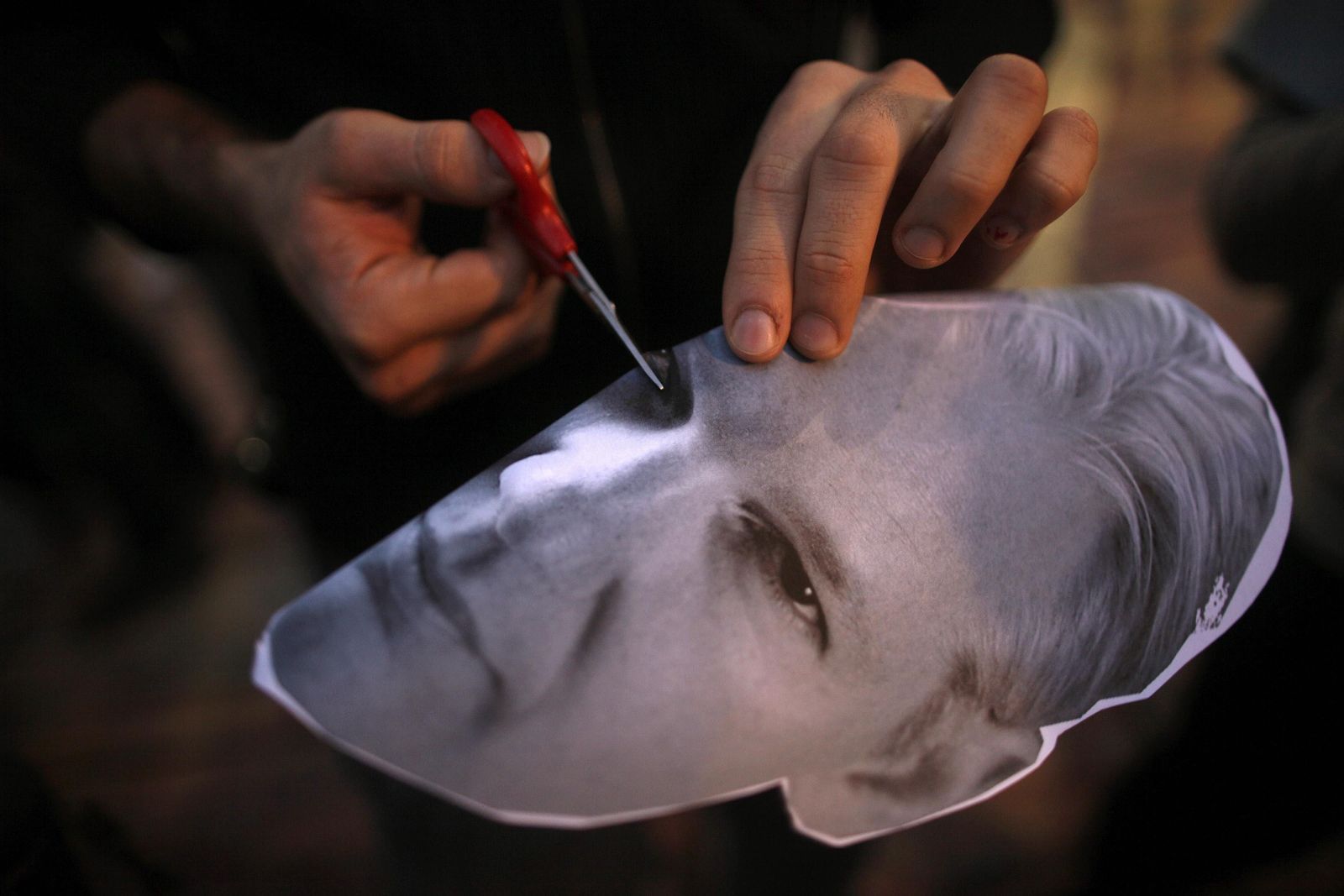 A protester prepares a Julian Assange mask at a pro-WikiLeaks demonstration in Malaga, Spain, on Saturday.