WHAT DO THE DOCUMENTS SHOW?

The documents uncovered by the Internet platform WikLeaks are comprised of:

A single report originates from 1966, but the vast majority come from 2004 or later. That was the time the US set up SIPRNet, the database from which the material originates (see below). The number of cables has grown continuously over the years, and 9,005 reports were sent during the first two months of this year alone. After that, the stream of material obtained by WikiLeaks ends. Taken together, the cables provide enough raw text to fill 66 years' worth of weekly SPIEGEL magazines.

DER SPIEGEL, the New York Times, London's Guardian, Paris' Le Monde and Madrid's El Pais have viewed, analyzed and vetted the mass of data provided to the publications by WikiLeaks.

Every cable includes the date, author, addressee, classification level and the report text itself. The cable texts also often mention the names of informants. DER SPIEGEL and SPIEGEL ONLINE have for that reason decided not to publish the vast majority of the documents. Instead, we have quoted from individual cables or provided excerpts or entire cables in which we have blacked out names and other details in order to make the informants unidentifiable. We did not do this in some instances where the person who served as the informant was important enough that it was of political relevance to name them.

The country cables have, for the most part, been composed by ambassadors, consuls or their staff. Most contain assessments of the political situation in the individual countries, interview protocols and background information about personnel decisions and events. In many cases, they also provide political and personal profiles of individual politicians and leaders.

WHERE DOES THE MATERIAL COME FROM, AND HOW EXPLOSIVE IS IT?

As with the and war logs previously obtained by WikiLeaks, the diplomatic cables were also sent via the United States' secure Secret Internet Protocol Router Network (SIPRNet). The US government network is used for the transmission of documents that are classified as being at levels as high as "confidential" or "secret." According to the US government, the second-highest classification level is given to information that, if published, could cause "serious damage" to national security. Cables classified as "top secret" are not included in the data leaked to WikiLeaks. Separate access is required for those documents.

Around half of the embassy cables aren't secret, with 40.5 percent classified as "confidential." And only 6 percent, or 15,652 cables, are classified as "secret." Of those, 4,330 are so sensitive that they carry the additional label "NOFORN," meaning that they should not be made accessible to non-US nationals.

Close to 2.5 million people have access to the SIPRNet data, including staff at many government departments and agencies. Experience has shown, however, that the largest share of users are at the Department of Defense. The classified data is available on special computers that are set up at centers where US forces operate. The log-in procedures and passwords are changed approximately once every 150 days. But even documents that are classified at the highest level of "top secret" are still accessible to around 850,000 Americans. The leak of the diplomatic cables is an accident that was bound to happen sooner or later.

Graphic: How to decipher the codes in the US dispatches

Foto: DER SPIEGEL
HOW SHOULD YOU READ THESE DOCUMENTS?

When compared to the military reports from Iraq and Afghanistan, the diplomatic dispatches make for much easier reading. For example, they contain far fewer acronyms, and they were usually composed in the much less stressful environment of an office. However, there are some codes used in document headings that require some explanation. In the graphic to the left, a sample dispatch has been provided to help you see how they were composed and to supply you with detailed explanations of the data included within them.

HOW RELIABLE IS THE INFORMATION?

In their dispatches, the diplomats are reporting on things happening around the world. In doing so, they frequently make critical remarks about foreign politicians and their motives. Much of what was written and transmitted was done so in the belief that the dispatches would remain classified for the next 25 years. This presumably explains why American ambassadors and envoys include much gossip and hearsay in their reports back to the State Department in Washington.

One of the central attractions of the documents is that they allow us to hear many diplomats and politicians speaking the truth -- as they saw it, at least -- because they believed their comments would be kept secret. However, it should be noted that it is not always possible to unequivocally tell which sources are telling the truth, who is merely relaying hearsay and what might even be purposeful misleading or lying.

HAS A COMPLETE RECORD BEEN PROVIDED?

It is unclear whether a complete set of documents was provided. It is entirely possible that an overly large or small number of reports from a particular country or region made its way into the data collection. It is also theoretically possible that there has been some falsification within the documents when it comes to the times or the issues they discuss.

Although we do know the establishment where the material was taken out of the American system, we do not know the exact circumstances under which the WikiLeaks source copied the material. For example, he or she could have been under extreme time pressure or interrupted during the process. He or she could have made a point of selecting particular material or done so at random, or he or she might also have copied all that there was available to copy. This batch could have also been a selection made according to unknown criteria. The source or other individuals could have also filtered the material at a later point in time. The lack of documents classified as "top secret" is solely due to the fact that they were distributed in a different way and that the source possibly did not have access to them or even chose not to try to access them.

HOW DO OTHER COUNTRIES HANDLE INTERNAL CORRESPONDENCE?

The frankness shown in these internal documents is not unusual. Of course, most of us are used to hearing the world's diplomats speaking in contorted formulations. But, when it comes to internal documents, the language that diplomats use is quite clear -- and that is also true for other countries as well as the US.

The system used by the Americans also isn't unique in technical terms. In fact, Germany depends on a similar system: A secure intranet set up in 2004 connects all German embassies and consulate generals with the Foreign Ministry. German diplomats have four different labels they use to designate the secrecy level of their correspondence: "Classified Information -- For Internal Use Only," "Classified Information -- Confidential," "Secret" and "Strictly Secret." It uses the SINA system of encryption. It is not known how many people have access to the German system. 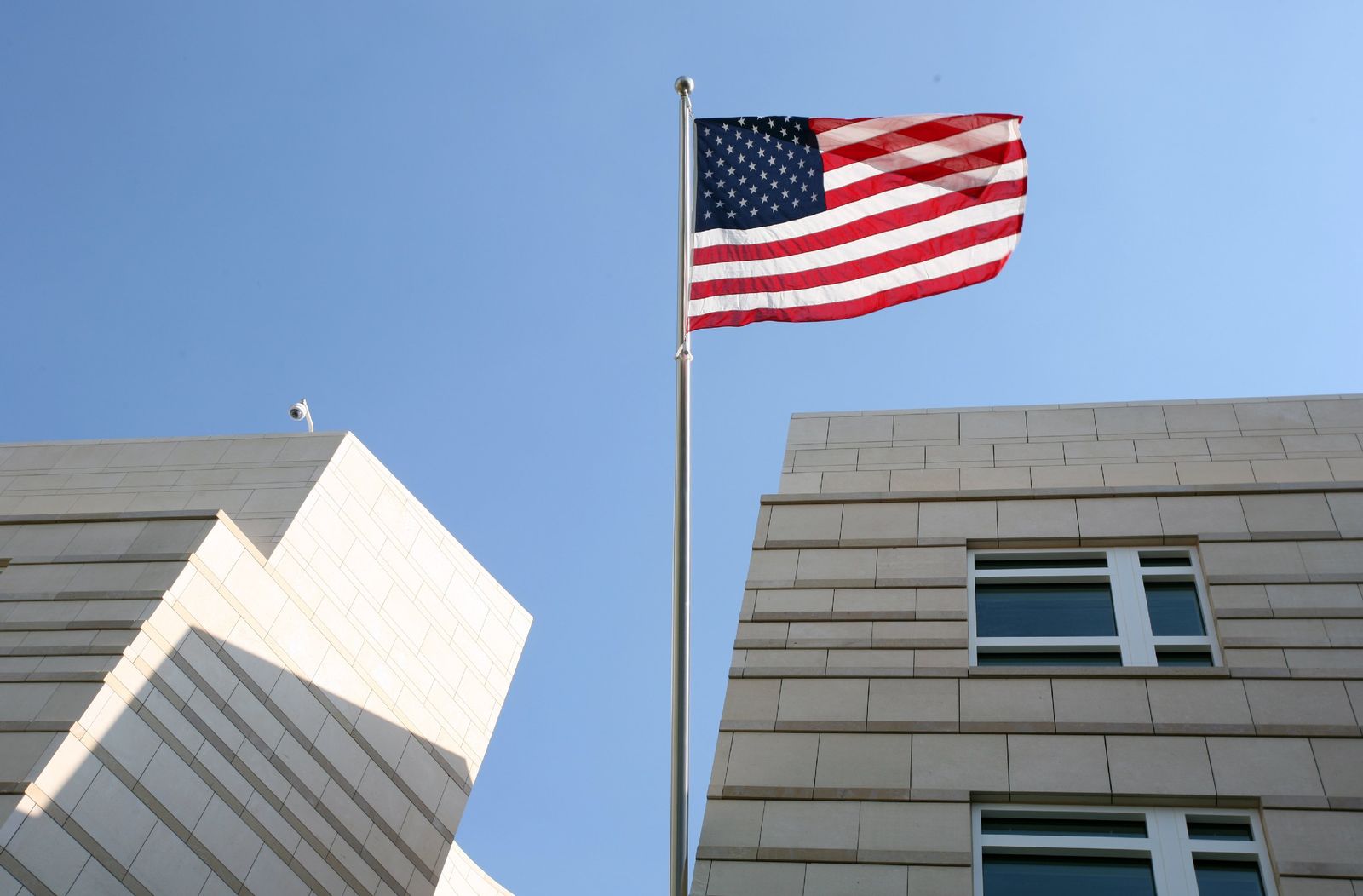 The cables sent from the US Embassy in Berlin to the State Department feature prominently in SPIEGEL's coverage of the WikiLeaks diplomatic cables. 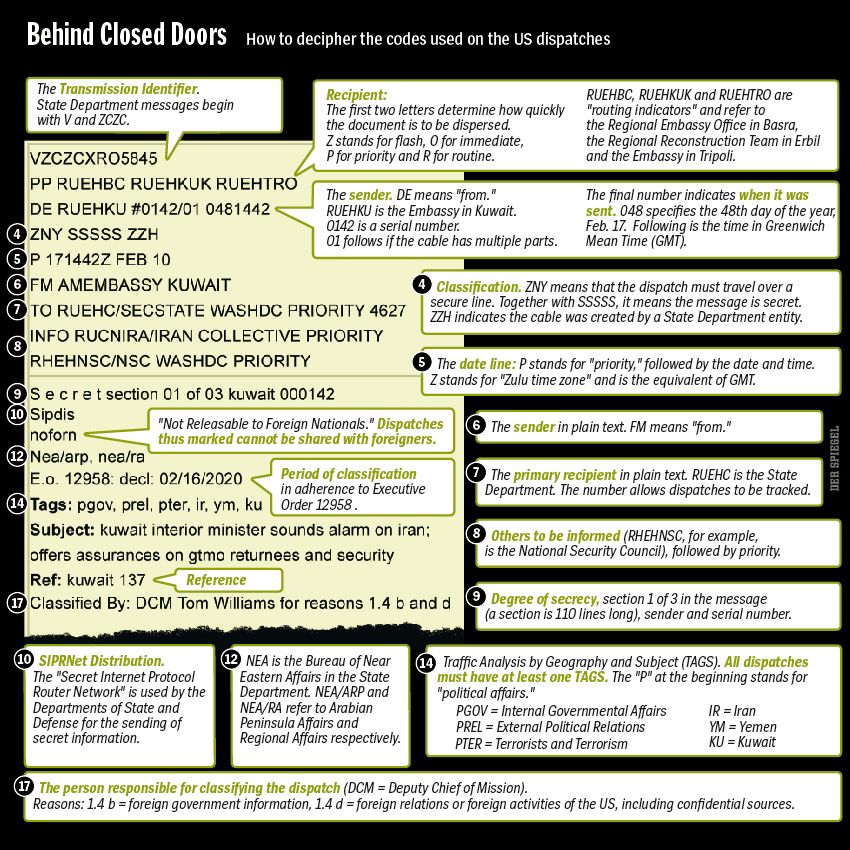 Graphic: How to decipher the codes in the US dispatches