"I never thought we had a chance of winning," says a jubilant Regina Walejewa, a Russian marketing expert in Moscow. It's 3:19 a.m. and International Olympic Committee President Jacques Rogge, many time zones away in Guatemala, has just announced that Sochi has been chosen to host the 2014 Winter Games. Like many people across Russia, Walejewa stayed up late on Wednesday night to watch the live results.

Throughout the evening, Russian TV stations broadcast the latest news from the IOC's vote in Guatemala City. "We won," the presenter of one sports channel said repeatedly, almost as if he couldn't believe what he had just heard. Few in Russia had much faith in their prospects for success. They kept thinking of recent disputes between Moscow and the West and the fact that Russia had already submitted previous bids for the Winter Olympics without ever winning.

In Sochi, tens of thousands gathered awaiting the decision on a large square in front of the city's main theatre. International musicians, including German pop star Thomas Anders from Modern Talking, performed in an effort to make the tense wait a little easier. When it finally came, eruptions of joy could be heard everywhere: "Sochi, Sochi, Russia," the crowd screamed as the decision was beamed onto a giant screen in the square.

Salzburg had already dropped out of the running with the fewest votes in the first round on Wednesday. And Russian President Vladimir Putin had already departed in his jet for Moscow when news came that the southern Russian city Sochi had beaten out Pyeongchang in South Korea. He had traveled to Guatemala on Monday to support the Russian delegation as it promoted its bid. "If everything is done honestly in Guatemala, then we will have the best chance," Putin said before the vote. It was a reference to incidents reported earlier at the Real Intercontinental Hotel in Guatemala City.

The Russian media is claiming that articles about human rights violations in Russia were pushed under the doors of hotel rooms of IOC members in order to turn the decision-makers against Putin. The Russian president described the incidents as "sabotage." But the Russian delegation also faced the uncomfortable allegation that it had "bought" the Winter Olympics.

The Russian government spent more than $30 million on advertising and celebrations promoting its bid. The cost of mounting the two-week Winter Games is expected to cost over $1.5 billion. But, as Deputy Prime Minister Alexander Shukov said, money won't be an issue.

Which is just as well -- because an estimated $12 billion will also have to be raised through public and private sources just to make Sochi's infrastructure conform to international standards. Entire apartment blocks in the city, with its population of 330,000, don't even have electricity or gas. There aren't enough hotels or training and sporting venues to host the Olympic events. Almost everything will have to be built from scratch.

To that end, the Russians are planning to build what are being described as 19 massive "bed mountains" that can host up to 29,000 guests, new ski slopes, lifts and sporting venues. Of the three cities that made the final round, though, Sochi is by far the worst prepared to host the Olympics.

The amount of money Russia plans to invest in order to hold the Olympics is also higher than the entire national budget for education, health and family policy together. Moscow says the government will cover two-thirds of the costs. The rest is expected to come from private investments from oligarchic corporations that are always pleased to lend the Kremlin a hand.

Back in October, Putin announced that energy giant Gazprom is prepared to pay $180 million for the privilege of becoming the event's main sponsor. Oleg Deripaska, one of the world's largest aluminum producers, wants to invest €620 million to build the Olympic Village as well as ice skating and sporting venues. The company has also purchased Sochi airport, which it plans to transform into a modern international facility. Vladimir Potanin, who heads the holding company Interros and is considered one of Russia's leading businessmen, has also pledged to invest €230 million. The company is planning to turn its own retreat in the Caucasus mountains into a ski resort.

Of course, the oligarch's investments are anything but altruistic -- they're hoping the investment will turn a profit in the long-term. The prospects could be good, too. Sochi's Olympic bid has already led to a real estate boom along the Russian Black Sea coast. And Russian oligarchs and investors aren't the only ones who have the potential to make money from the mega-project.

"Foreign firms are also planning to strengthen their investments in southern Russia," Regina Valeyeva announces, full of a pride that doesn't just stem from a sense of patriotism. She works as marketing coordinator for the Swiss firm Sika. The company produces concrete additives that will be used in the construction of the walls of a highway tunnel in Sochi. "My company has a huge contract there," she says.

But critics see the mass investment planned for Sochi as just increasing the country's growing divide between rich and poor. Alexander Doskoy, mayor of Arkhangelsk, told the radio station Echo of Moscow the investments would harm other regions in the Russian Federation. "If such enormous sums were made available to fix apartments in need of repair, a lot of people in Russia would be thankful," he said.

That, says, Valeyeva, is the constant problem in Russia -- the rich are the only ones to profit from projects like this. "In the longterm, Sochi will only be affordable as a sporting area for the rich," she says. "Normal people won't likely be able to afford a winter sports vacation." 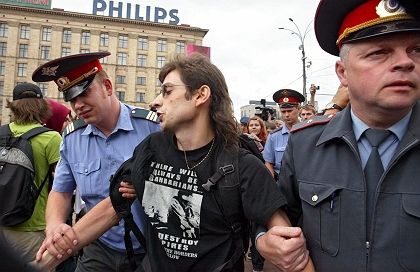 Police in Moscow arrest an environmental activist attending a protest in opposition of the Sochi bid.

"Sochi wins, the people lose," goes the slogan of the group No Olympic Games, which staged a protest against the bid in Moscow on Tuesday. Dmitry Kokurev and his group of environmental activists want the unique natural environment of the mountains surrounding Sochi to be preserved. But Russian top brass' opinion of his views is quite clear: Despite having obtained official permission for the demonstration from the police, the protest was dispersed and Kokurev temporarily taken into custody.

His arguments are difficult to dispute: Plans are afoot to build the Olympic Village right on the edge of the West Caucasus National Park, which is listed as a UNESCO World Heritage Site. The Krasnaya Polona ski area, where many events are to be held near Sochi, is also part of a nature reserve.

But the Russian government has stated that the construction measures in the protected areas are "socially necessary" and it has lifted many restrictions on building in the runup to the Olympics.