A year ago, the world was almost optimistic. Disease experts had a pretty clear idea of how best to combat and possibly defeat the coronavirus.

"If we get a coronavirus vaccine that is 70 percent effective and we combine it with some elements of good public health practices, then I think we can get good control of this pandemic within a year or so," American immunologist Anthony Fauci told DER SPIEGEL in an interview in August 2020.

We now indeed do have highly effective vaccines, and they have come to the market much faster than hoped – and yet SARS-CoV-2 has nonetheless invalidated what turned out to be overly optimistic expectations. The virus has mutated far more than most experts expected, becoming more contagious and beginning to pose a challenge to the vaccines that are currently available.

With the Delta variant now dominant around the world, one infected person infects six to seven other people without containment measures in place – more than twice as many as were infected by the original wild type of the virus circulating in 2020. The vaccines that are currently available still provide good protection against a severe course of the disease, but less protection against infection with the virus than for the previous variants that had been prevalent.

That's just one reason that hopes for herd immunity by this autumn have been dashed. The number of intensive care patients in German is once again rising significantly. "If we don’t manage to drastically increase vaccinations, the current fourth wave may be devastating," Lothar Wieler, the president of Germany’s center for disease control, the Robert Koch Institute (RKI), said last Wednesday.

It could well be that the second pandemic winter will be a difficult one. And no one dares to venture a guess at what will come after that. What happens next depends not only on vaccination, but also on how the virus might mutate.

"This virus keeps surprising us."

Even for leading epidemiologists, like Emma Hodcroft of the University of Bern, making predictions is something of a fool's errand. As part of the Nextstrain project, Hodcroft is collecting SARS-CoV-2 genome sequences around the world. "I don’t think we understand SARS-CoV-2 well enough to be able to give a definite answer to the question of how the virus might evolve," Hodcroft told DER SPIEGEL. "This virus keeps surprising us," agrees Mary Bushman, a mathematician and population biologist at Harvard University’s T.H. Chan School of Public Health. "No one expected such large jumps in contagiousness.”

This may may be because the Delta variant has the ability to replicate very quickly once the infection begins.

But even the genome sequence of a newly emerging variant tells us little about what properties the mutant will have. For example, variant C.1.2, which first emerged in South Africa in May, looked very threatening at first glance. It was "highly mutated" beyond any other variant in the world, South African researchers concluded in a preprint study. They found that is was "between 44-59 mutations away from the original Wuhan" virus.

However, it doesn’t currently appear that C.1.2 will be able to displace the Delta variant. "Delta has relatively few mutations," says Tulio de Oliveira, a bioinformatician at the University of KwaZulu-Natal in Durban, "but it apparently manages to keep C.1.2 at bay."

"We Will See Much More Dangerous Variants"

Still, that doesn’t necessarily mean that Delta will remain dominant forever. "I think it is very likely we will see much more dangerous variants than Delta because of the large number of unvaccinated people around the world," predicts politician Karl Lauterbach, who is the health policy point person for the center-left Social Democratic Party (SPD) and a leading German voice in the pandemic.

Harvard University's Bushman ran a model calculation in an attempt to gather at least some clues about which new variants researchers and public health officials should be keeping a close eye on and what precautions will be essential for winter. The model simulated the emergence of new virus variants.

According to her findings, variants that are even more contagious are likely to prevail over the Delta variant in the current phase. The so-called moderate escape variants, on the other hand, which at least partially cancel out the effectiveness of vaccines, don’t generally stand a chance according to Bushman’s model calculation – provided they aren’t also more infectious than Delta.

However, if a variant that has both characteristics at the same time emerges, it could become a nightmare. An escape variant more contagious than Delta could have "devastating consequences," Bushman says. She adds that the double effect would be far greater than the sum of the two individual effects. Only very strict coronavirus containment measures and a rapid vaccination campaign could mitigate the spread of that kind of variant.

"We are particularly concerned about the UK," says Tulio de Oliveira. "While vaccination rates are high there, behavior also plays an important role. And that has been problematic since the British declared 'Freedom Day’. Anything that emerges or is amplified there has the potential to spread extremely fast across Europe, North America and Africa given the connection of the country to the rest of the world."

There could also be negative consequences if corona measures like mask-wearing requirements are lifted too early. More contagious variants in particular were then able to spread more quickly in Bushman’s computer simulation. "Vaccinations alone," says Bushman, "may not be enough in these cases to keep the number of infections sufficiently under control, especially if the vaccination campaign progresses too slowly." At Germany’s Robert Koch Institute, officials believe that the coronavirus containment measures currently in place will have to be maintained for quite some time to come.

"This virus will be with us for years to come."

The extent to which SARS-CoV-2 can mutate and develop at all remains an open question for scientists. "There is probably an upper limit in terms of how much more infectious the virus can get," says Hodcroft. But it probably hasn’t been reached yet. "There could be a further increase in infectiousness," she adds.

It is even more difficult to predict how the virus will evolve to bypass immunity, she says. "With many viruses, this is a constant battle," says Hodcroft. "We gain a certain level of immunity, and the virus is then under pressure to escape that immunity." If a new escape variant were to spread, though, it wouldn't automatically mean "that we are back to square one with a highly dangerous virus," she says.

Theoretically, though, that remains a possibility. "There’s a widespread public perception that viruses become less dangerous over time because they evolve to avoid harming the hosts they rely on for transmission," says William Hanage, a professor of epidemiology at Harvard University’s T.H. Chan School of Public Health. But this is wrong, he says. The truth is that a virus can become more or less dangerous depending on the situation.

"And it could also be that variants develop that are by and large immune to our current vaccines," says politician Lauterbach. "If, for example, the coronavirus’ spike protein develops a cloak of invisibility like some cancer cells." But that is all still in the realm of speculation. He is more pessimistic about the fact that there is no effective treatment for COVID-19 patients. And the fact that there will still be serious illnesses because there are no vaccines that provide 100-percent protection. "This virus will be with us for years to come." 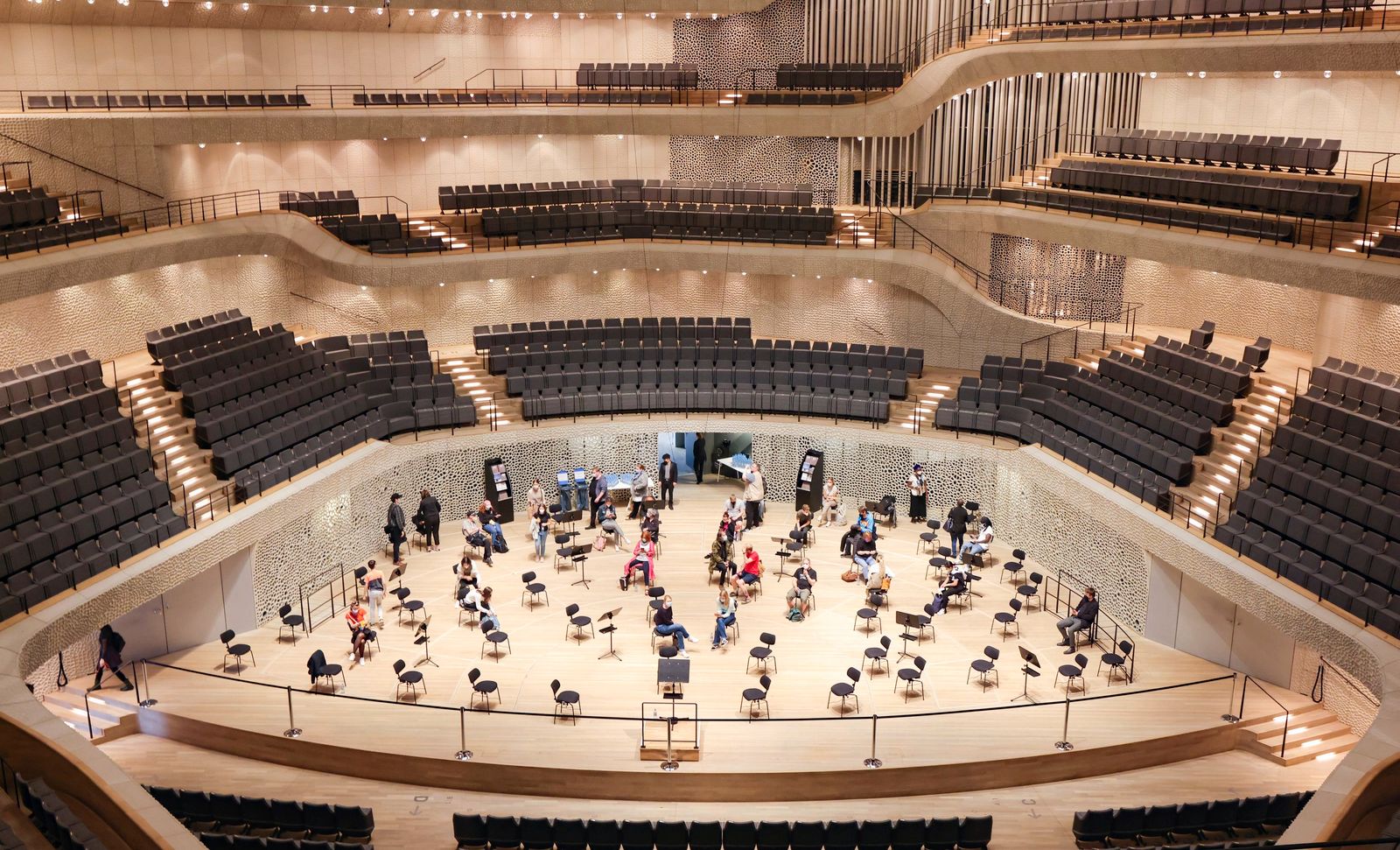 A vaccination event at a Hamburg concert hall: "The fourth wave may be devastating."