All this may sound paradoxical and may not make sense to everyone immediately. But this is the right way to go for the West if we want to defend our interests and values. Our strength enables us to take the long view, to show strategic patience -- and to avoid walking into the trap of an escalation spiral.

Wolfgang Ischinger served as state secretary in the German Foreign Ministry and has been the chairman of the Munich Security Conference since 2008. He is also a senior professor at the Hertie School of Governance in Berlin.

Such an approach is also warranted given public opinion in Europe. The reactions to German Foreign Minister Frank-Walter Steinmeier's warnings of "saber-rattling" have made clear that there are strong pro-Russia and anti-NATO currents in German and European public opinion. Very negative Russian reactions to the NATO summit -- which are to be expected -- might further deepen the divide. Thus, the more the West adheres to the seemingly paradoxical guidelines sketched out above, and seeks to engage Russia constructively, the more likely it is we can prevent deeper rifts within the West.

Based on this, four further observations:

The current crisis has produced the most dangerous situation in and around Europe since the end of the Cold War. The flexing of military muscles -- for example, this April, very low passes by Russian fighter planes over a US destroyer in the Baltic Sea -- carries a high risk of miscalculation, and of unintended or accidental escalation.

There is no joint NATO-Russia crisis reaction center today -- and not even an agreed procedure for how to manage a crisis in case of a military incident. It is not clear who would contact whom, and how, in order to prevent an escalation. But the less clear the procedure in a crisis, the higher the risk of catastrophic developments. We need a joint crisis reaction unit as a first step towards confidence building through military to military contacts.

Frankly, the current and planned NATO reassurance measures are quite modest -- especially when compared to the much bigger Russian exercises and mobilization activities. And the planned rotating deployment of NATO troops in Eastern Europe stays within the limitations spelled out in the NATO-Russia Founding Act. The 4,000 troops that will be stationed in Estonia, Latvia, Lithuania, and Poland cannot seriously be considered an "encirclement" of Russia. Their presence demonstrates solidarity with our Alliance partners in the East. No less, but also no more!

Even so, as German Foreign Minister Steinmeier has observed, we need to make sure the two tracks are well balanced: visible military measures, yes, but please more than just fuzzy rhetoric on the second, on the cooperation track!

Sure, we do engage with Russia in some important ways (even though these activities could be advertised and presented more forcefully): There are permanent and consistent diplomatic efforts to end the war in Ukraine, led by France and Germany, and actively supported by the US. The quest for joint economic perspectives ("connectivity") is a key component of Germany's current chairmanship of the Organization for Security and Cooperation in Europe (OSCE). The NATO-Russia Council has been revived -- but unfortunately, Russia has rejected having another council meeting ahead of the NATO summit. The NATO secretary general regularly renews the West's offer to Russia to jointly update and strengthen the Vienna Document and other arms control regimes in order to increase stability and transparency. And on Syria and, more recently, on Libya, there are at least joint attempts to find solutions.

But we could do more.

The strongest signal to the Russian people that we seek an open relationship instead of confrontation would be for the EU to offer visa-free travel to Russians. If this is possible for Turkey and Ukraine, why not also for Russia? It will not be easy to find agreement on this among Schengen countries, but there would be an enormous echo to such an initiative in Russia, even if it were just a first step in a longer process. And we should multiply the number of scholarships and exchange programs for Russian students and academics: The more Russians can see for themselves what Central and Western Europe are really like, the more probable it is that they will see how ridiculous and unfounded anti-EU and anti-West- propaganda in the Russian media is.

A second suggestion: We should work hard to reaffirm and possibly update the fundamental principles of the European peace order enshrined in the Final Act of Helsinki. For this reason, an OSCE-mandated Panel of Eminent Persons recommended going "Back to Diplomacy." Reigniting the "diplomatic machinery" -- after a successful implementation of the Minsk process -- could also help jump-start US-Russian relations, before or after the US elections. This is particularly important since progress in the broader crisis between East and West won't happen without direct White House-Kremlin talks. That's what Putin ultimately seeks: to be seen on this level. In the interim, the German OSCE chairmanship should continue to prepare the ground for the longer term goal of a Euro-Atlantic summit of all OSCE participating states.

Third: In order to deal with predictably negative Russian reactions to the upcoming NATO summit, a very high-ranking NATO representative should fly to Moscow right before or after the summit to brief Russian leaders -- and provide transparency about NATO's intentions.

The West's reaction needs to be based on a clear analysis of Russian power: How strong is Russia?

Economically, Russia is certainly not a great power. Russian GDP lies in between that of Italy and Spain. In 2015 alone, the Russian economy has shrunk by around 4 percent. Its power of innovation and modernization is too weak to compete successfully in global markets. Even a recovery of oil prices would only bring minor, and hardly sustainable, relief.

Politically, Russia has outmaneuvered itself on various fronts. Within a few months, Putin has managed to convince 40 million generally Russia-friendly Ukrainians that his country poses the biggest threat to Ukraine; the Eurasian Union is not moving forward at all; for the first time in decades, Sweden and Finland are now discussing the potential advantages of NATO membership; enhanced cooperation with Beijing has not really brought the expected benefits; and for large parts of the Sunni Arab world, Russia has turned into a long-term adversary.

In addition to its economic and technological plunge, Russia's foreign policy appears heavily burdened and lacking any form of "soft power." The Kremlin seeks salvation in backward-looking self-assertion instead, romanticizing about the past rather than preparing the country for the 21st century. Many in the Russian elite understand that in the longer term, this strategy is not sustainable, that it is doomed to fail.

Apart from its role as a nuclear military power, Russia is thus nothing more than the famous "Scheinriese," or "illusionary giant," from the famous children's book "Jim Button and Luke the Engine Driver" by German author Michael Ende: seen from far away, a threatening giant, but coming closer, getting smaller and smaller -- and with a depressingly poor outlook.

The best remedy for the West is to act unanimously and judiciously. Only then will we stand chances of implementing Minsk and lifting the sanctions. Actually, getting Minsk implemented is not impossible at all.

The biggest danger lies in Europe's own weakness. From Putin's point of view, the recent "Brexit" was a success for Russia -- and much more important than anything he himself could have achieved through his own actions.

Of course, admitting our own failures cannot mean that we accept a Russian security doctrine that prohibits the free choice of alliances -- in violation of the principles of Helsinki 1975 and Paris 1990. But we can and should take a critical look at some of our own decisions:

One of two key pillars of NATO's policy from the 1990s, developing the relationship with Russia, has not been successful. The two pillars -- NATO enlargement on the one hand, and a new quality of NATO-Russia relations on the other -- were supposed to be equally important. That was the understanding reached in Madrid in 1997. Unfortunately, we failed to develop the second pillar as planned, while further enlargement rounds were prepared and successfully implemented. When US President George W. Bush tried to advance Ukraine's and Georgia's NATO membership prospects in 2008 against stiff Russian opposition, German Chancellor Angela Merkel and French President Nicolas Sarkozy finally pulled the emergency brake. But by that time, the relationship with Russia was already seriously damaged, as President Putin pointed out in Munich in 2007.

As a result, the dispute over the territorial status quo in Europe which we thought had been settled with the German "Ostverträge," the Helsinki Final Act, the Two Plus Four Agreement and the Paris Charter, has re-erupted. Those who are now suffering the most are the "countries in between," such as Georgia, Ukraine and Moldova: They feel threated from the East, and unprotected by the West.

In 2008, Georgia and Ukraine were promised NATO membership -- without any date attached. Do we stand by this promise? Or has this become an empty pledge? If so, does this mean that we carry some responsibility for the fact that both countries have de facto lost parts of their territory since? Should we encourage both countries today to continue on the NATO track, or should we instead encourage them to follow the Finnish or Austrian models, in order to ease the situation politically and militarily, and in order to normalize their economic relationship with Russia? But would that not mean that we abandon our own principles, in particular that of the free choice of alliances? Would that not lead to a massive loss of our credibility? Or, if we invite them to stay on the NATO track, are we prepared and determined to assure the economic survival of both countries by offering sustained and comprehensive political and financial support? Are we prepared to say we will do whatever it takes in order to create a greater sense of stability and confidence in Kiev and Tbilisi? We have to confront these and other questions, even if they may require painful responses. Strategic clarity is required if we want to bring the current crisis of European security to an end.

We might also ask ourselves whether now was really the right time to take the next steps on ballistic missile defense, which has long been the subject of such heavy criticism from Russia? Would it not have been better to take a breather? Why the rush?

If we openly address such issues, we will be in a better and more credible position to debunk some of the myths promoted by Russia to mislead and confuse Western publics. A prominent example is NATO enlargement itself: The Soviet Union, it is claimed, was promised in 1990 that there would be no NATO enlargement. The facts are, however, absolutely clear: By signing the 1997 NATO-Russia Founding Act, Russia explicitly and formally accepted NATO enlargement. Debate closed!

This is also one of the reasons why we should adhere to the NATO-Russia Founding Act regarding the deployment of NATO troops in Eastern member states. And we do -- even though Russia has violated its provisions in several ways.

Our policy goal is to prevent a new dividing line through Europe, 1,000 kilometers east of the Berlin Wall. We would like to have Russia as a Euro-Atlantic partner if and when Moscow decides to reaffirm its respect of the principles of the European peace order, jointly elaborated decades ago, in Helsinki and in Paris.

Until then, we need strategic patience. That means two things, above all: to be true to our principles and values, not to zig-zag -- and to keep calm, not to overreact. Thus, what might seem like a paradox is actually the intelligent Western policy approach to the challenge presented by Russia today. 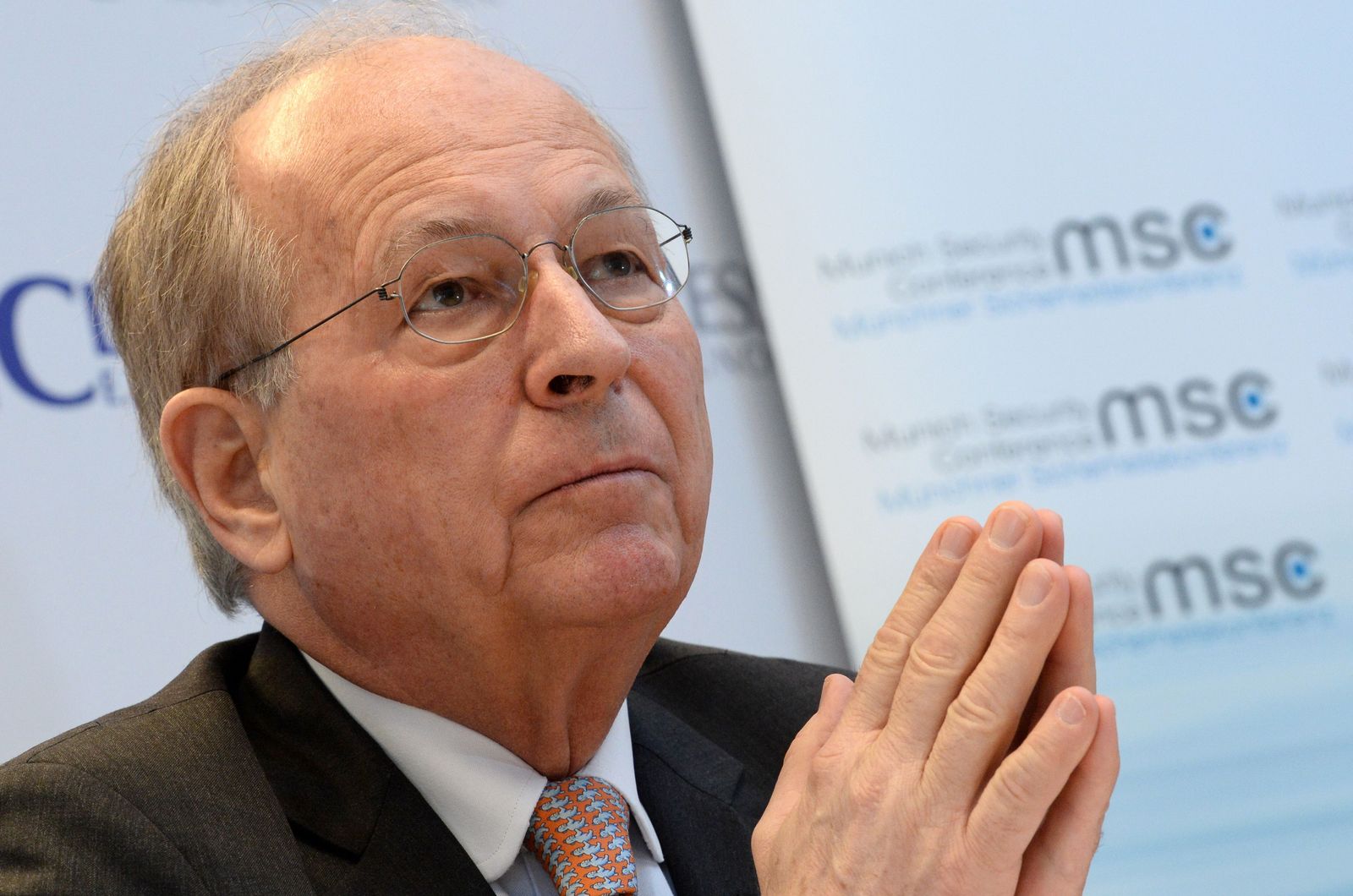