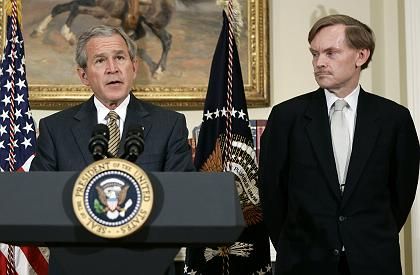 Robert Zoellick, the designated president of the World Bank, stands next to US President George W. Bush.

Robert Zoellick will be the first World Bank president to take office already decorated with the Federal Cross of Merit, Germany's distinguished state honorary badge. His predecessors John McCloy and Jim Wolfensohn also received the Cross -- but only later. Zoellick already wears it, in recognition of his efforts to help bring about German reunification. As the main United States mediator in the "Two Plus Four Agreement" -- the Treaty on the Final Settlement with Respect to Germany that emerged from the 1990 talks between the two German states and the four World War II victors, and which led to German reunification -- he vigorously championed German self-determination. The Germans thanked him by awarding him the order.

On Wednesday, US President George W. Bush will nominate Zoellick as the successor to controversial World Bank president Paul Wolfowitz. In Germany, Zoellick is considered a friend, an "Atlanticist" and a bridge-builder. He once described his bond with Berlin in a speech here as a common, German-American vision of the future, a transition to "prosperity, security and hope for hundreds of millions of people."

They were grand words from the designated top creditor to the world. His nomination was quickly interpreted as a technical victory for the moderates, since he was considered the favored candidate of the Europeans, of developing countries and even of the World Bank's critics. His nomination could therefore be seen as a gesture of reconciliation on the part of US President George W. Bush. But 53-year-old Zoellick knows what he wants -- which is to say, he knows what his superior in Washington wants.

He is, after all, an old friend of the Bush family -- and he shares its conviction that the United States is the only qualified world power today. Zoellick, who grew up as a descendant of German immigrants in Illinois, was one of the protégés of James Baker, the Bush clan's perennial crisis manager and the Secretary of State under George H.W. Bush. As Baker's right-hand man, the junior diplomat hammered out the foreign policy conditions of German unity during the "Two Plus Four" talks in the summer of 1990.

When George W. Bush, then still the governor of Texas, set his sights on the White House, Zoellick was part of an intimate circle of advisors led by later National Security Advisor Condoleezza Rice. They called themselves "the Vulcans" and they sought to transform him into a man of the world.

Bush returned the favor by making Zoellick, a Harvard graduate, part of his government: first as US Trade Representative and then as Deputy Secretary of State. There was already talk, for a brief time, of Zoellick possibly becoming president of the World Bank in 2005. But Bush opted for the neoconservative Wolfowitz at the time -- the architect of the war in Iraq whom Bush had to somehow quickly give a sideways promotion so he could get him out of the Pentagon.

"There is still evil in the world"

But opinions diverge over Zoellick's ideological alignment. Conservatives describe him as a "man of the center" (in the words of German daily Berliner Morgenpost) and as a champion of international alliances. But those on the left view him as a special brand of neoconservative: one who is less ideological and disguises himself for pragmatic reasons, but still quietly sympathizes with the neoconservative cause.

Zoellick is "moderate" only by comparison to Wolfowitz and his former Under Secretary of Defense for Policy Douglas Feith, a classic neoconservative, writes Tom Barry, the director of the left-leaning International Relations Center. Zoellick himself accepts the "the neoconservative premise of US global supremacy" but wants to "wisely manage that power," according to Barry.

He's not an ideologist, then, but an idealist: As early as one year before George W. Bush took office in January of 2001, Zoellick articulated his ideas about a "Republican foreign policy" in an essay for Foreign Affairs. The United States would shape the future world order on the basis of its military supremacy, Zoellick wrote, predicting the events of the years to come. "A modern Republican foreign policy," he wrote, "recognizes that there is still evil in the world." Bush himself couldn't have said it better.

What is certain is that Zoellick consistently pushed for the liberalization of world trade under both Bush presidents. It was his own brand of war against "evil." He helped save the Uruguay Round, the trade negotiation lasting from September 1986 to April 1994 which transformed the General Agreement on Tariffs and Trade (GATT) into the World Trade Organization (WTO). He jockeyed the North American Free Trade Agreement (NAFTA) out of its crisis. He lowered trade barriers to the Third World -- an aspect of his record that helped him in the competition for his new position at the World Bank -- and enjoys a favorable reputation in African, Latin American and Asian countries. He brought China into the WTO -- an achievement of which he was personally especially proud.

The humanitarian crisis in Darfur was his most recent priority. "Not on our watch" was the motto on a bracelet he wore during a 2005 visit to a Darfur refugee camp. In total, he traveled to Sudan four times and was involved in the negotiation of a peace agreement with the rebels there last year. He was considered one of Washington's strongest voices in Darfur.

But Zoellick turned his back on the government in July of 2006, disappointed with his political prospects, in order to try his fortune in the more lucrative field of private business. He became a managing director for the Goldman Sachs investment bank. Burned-out government members had frequently found jobs there in the past.

When Bush charged his Treasury Secretary Henry Paulson -- Goldman's former CEO -- with finding a successor for Wolfowitz, it was therefore no great surprise that Paulson found a candidate in his former firm.