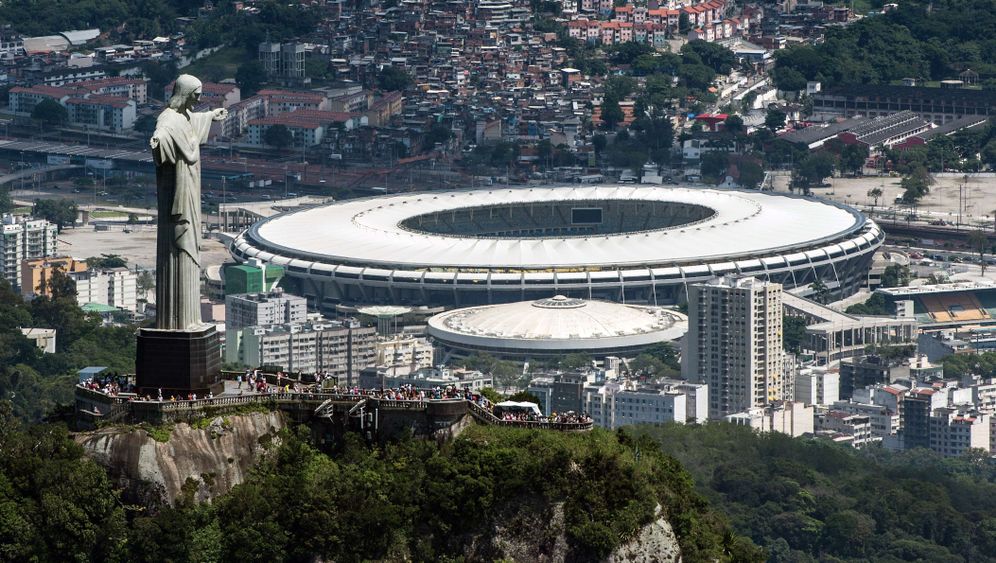 The São Cristóvão FR home pitch is located in the shadow of a concrete highway overpass in Rio de Janeiro. The mortar is crumbling from the walls. There are holes in the lawn. The words "The phenomenon was born here" are printed in large, black letters on the stadium wall. It's a reference to football legend Ronaldo, who began his world career as a player for the São Cristóvão youth team.

Rodrigo Sant'Anna, a 20-year-old striker for the club since January, had always dreamed of playing on this pitch. He wants to become the next Ronaldo. For him, the pitch symbolizes the Brazilian dream.

Sant'Anna is one of the top talents currently playing for the club, which last won the local championship in Rio de Janeiro in 1926. But Sant'Anna takes the train to practice every day. He lives with his parents and three siblings in a tiny apartment in downtown Rio. He pays for his own tickets. He was told that the club has no money to subsidize his train fare. The São Cristóvão training ground, next to the stadium, consists of a few bumpy pitches, and the locker rooms are in dilapidated, barracks-like buildings.

It doesn't bother Sant'Anna. It's what he's used to, he says. Before coming to São Cristóvão, he played for a third-division club in the suburbs. The conditions were much worse there. He had to pay for his own beverages, and there was no water in the showers. Nothing worked without "propina," or bribes. "Fathers would give the coach money so that he would let their sons play," says Sant'Anna. His father didn't pay, so he was often relegated to the substitutes' bench.

But all that counts at São Cristóvão is how good you are, says Sant'Anna. He firmly believes that.

Why Stay in Brazil?

Brazil is famous for its football players (or soccer players, as they are known in North America), and professional clubs from Europe have been luring away the best talent from the market for decades. But most of the clubs in Brazil are in terrible condition. They suffer from mismanagement and corruption, and the players are advised by dodgy agents, who promise them everything under the sun. Given that, why should top players stay here?

São Cristóvão is one of the biggest training clubs, a jumping-off point for young talent. Many of the young players live in two large dormitories on the club grounds, next to the locker rooms. They come from all over Brazil to São Cristóvão to begin their careers. Players' agents linger in the hallways, and even visitors are approached by mothers who praise their sons as future Ronaldos.

Sant'Anna's agent is his cousin. It isn't quite clear how well connected he is in the football world, but Sant'Anna has great confidence in him. The striker is being touted as a budding talent -- he is fast, agile and rarely far from the ball. He hopes to make it into Germany's national league, the Bundesliga. He has heard amazing things about life as a footballer in Germany. The stadiums are full, salaries are paid on time and there is even water in the showers.

Brazil is hosting next summer's World Cup, and on Friday, Dec. 6, the groups will be determined in the Atlantic resort town of Costa do Sauípe. At the gala event, the country of Pelé and Ronaldo will portray itself as a modern football paradise.

But the reality of football in Brazil will be on full display two days later, at the final championship match in Série A, the top professional league, where the stadiums will once again be practically empty. This season, the size of an average crowd at first division matches was only 14,500. Brazil's elite league ranks only 16th in global spectator statistics, behind both the German second league and Australia's A-League.

"I was really surprised to see how few people come to this stadium," says Dutch footballer Clarence Seedorf, who has been playing for premier-league club Botafago in Rio since the summer of 2012. When a player shoots a goal, the shouts of radio reporters are often louder than the cheers of fans. "They don't have the same football culture here as we do in Europe," says Seedorf.

Many fans can't afford ticket prices of up to €140 ($190), and the threat of violence and muggings discourages others from going to stadiums. Fans are also deterred by absurd kick-off times: Because telenovelas achieve higher TV ratings than professional football, matches often don't start until about 10 p.m., after primetime TV programming is over.

In the run up to the World Cup, efforts have been made to improve Brazilian football's image -- old stars like Ronaldinho were brought back from Europe and stadiums were modernized -- but these were merely cosmetic efforts. "Brazil is no longer the land of football people are constantly claiming it is," says respected sports columnist Juca Kfouri of the São Paulo daily newspaper Folha de Sao Paulo.

In June, Neymar da Silva Santos Júnior, the captain of Brazil's national team, the Seleção Brasileira, switched from FC Santos, in the south east of the country, to FC Barcelona. Of the 20 clubs in Série A, eight are deeply in debt, owing a total of €1.3 billion. Rio's most famous club, Flamengo, is €240 million in debt. The cash-strapped clubs haven't been paying their social security and pension insurance premiums for years, and players are only sporadically paid their salaries.

The Brazilian Football Confederation, CBF, is doing nothing to correct the situation. Its officials devote most of their efforts to marketing the Seleção, the only team capable of regularly attracting large crowds in Brazil.

"Our football hasn't evolved in decades," says 30-year-old Paulo André, a defender with Corinthians in São Paulo, one of the clubs which, thanks to its modern management, is still in good shape. As a young talent, André arduously worked his way up through the lower leagues, where he was paid starvation wages. He finally made it to France, where he had a career with FC Le Mans before returning home to Brazil four years ago.

Three months ago André, who has written a book about his experiences in professional football, joined with other players to form a protest movement called "Bom Senso FC," or "Common Sense Football Club." The group is calling for a fundamental restructuring of Brazilian football.

Almost all the professional players in Série A are overworked. In addition to the regional and national championships, they participate in the Copa do Brasil, a nationwide competition, as well as the South American championship, the Copa Libertadores. Some footballers play up to 90 matches a season, or about 30 more than a player with FC Bayern Munich.

"We often have to play three times a week. We are run into the ground, and there isn't enough time to recover from injuries," says André. In early November, José Maria Marin, the president of the CBF, invited representatives of Bom Senso FC to a discussion at the confederation's headquarters in Rio, but the meeting yielded little. Now the players are taking their protest to the stadiums. Before important matches, the opposing teams embrace each other and unfurl protest banners. A players' strike shouldn't be ruled out, either, says André. "If the CBF doesn't react, we'll resort to tougher measures."

Threat to Officials in Power

Bom Senso FC poses a threat to the mafia of officials that has controlled Brazilian football for decades. CBF President Marin was a staunch supporter of the military dictatorship that ruled Latin America's largest country from 1964 to 1985. As a member of the São Paulo state parliament, he once gave a eulogy for one of the military junta's most notorious torturers. Marin was brought into office by his predecessor and patron Ricardo Teixeira, who allegedly received large sums of money in bribes and has since left the country to live in Florida.

When Brazil was chosen to host the World Cup six years ago, Teixeira naïvely promised that the necessary stadiums would be built entirely with private funds. It has since become clear that most of the burden will fall on the taxpayers. During the Confederations Cup in June, millions of citizens took the streets to protest against government waste. Some of their rage was directed against the corruption in Brazilian football and the expensive costs of the World Cup stadiums.

For young, well-educated citizens, conditions in Brazilian football are a symbol of the country's broader mismanagement, and Corinthians defender André believes there will also be protests during the World Cup. He isn't troubled by the possibility of mass protests overshadowing the tournament. On the contrary, he says, "the protests are more important than the World Cup."

More than a thousand professional players have already joined Bom Senso FC. One of the activists' objectives is to reform the system that promotes young talent. Clubs like São Cristóvão are the lifelines of Brazilian football, because they train the players who will eventually play in Série A and the national team. But the clubs see almost none of the TV and advertising revenues the CBF collects.

On the grounds of the São Cristóvão stadium, there is a club museum where dusty trophies and yellowed photographs attest to the club's illustrious past. Some of the images depict the stadium with its stands filled with spectators. Today matches at the Arena Figueira de Melo, as it is called, rarely attract more than 100 people.

To raise money, the club rents out its grounds for barbecues and samba festivals. In the coming weeks, São Cristóvão will take some of its young talents on a promotional tour of sorts. They call it the "Bye Bye Brazil Tour," during which the young footballers will have a chance to demonstrate their skills in exhibition matches. Every year, some of the best players are signed on the spot, both by higher-ranked clubs and managers with connections in Europe.

Rodrigo Sant'Anna isn't on the list for this year's promotional junket. Carlos Alberto Ferreira, the general manager of São Cristóvão, has promised him a contract with a fixed salary. Sant'Anna doesn't know where the club expects to get the money to pay him.

Perhaps a planned marketing campaign will do the trick. The club wants to rename its stadium the Ronaldo Arena. Of course, the football idol, who most recently served as an ambassador for the 2014 World Cup, will have to appear in person, says Sant'Anna. Such an appearance would likely attract large crowds back to the arena. After all, general manager Ferreira argues, Ronaldo "still owes us something."