For a period of seven hours, Konrad Osterwalder was rector of two universities at the same time. "A consequence of their being in different time zones," he says in his musical Swiss accent. The position Osterwalder held for many years as rector of the renowned Swiss Technical University in Zurich ended officially at midnight on Aug. 31 of last year. At midnight local time, on Sep. 1, 2007, the 65-year-old assumed his new duties as rector of the United Nations University, or UNU.

Osterwalder is used to these kinds of incredulous questions -- and that's precisely the problem. The UNU, pronounced "You 'n' you," has been a well-kept secret up to now.

Its very name is confusing, because so far this supposed teaching institution has had neither students nor regular professors. Instead, it has functioned as more of a think tank for the United Nations. But if the new rector has his way, he'll make a real university out of the UNU -- and it could end up being the most universal university in the world.

For more than 30 years academics at the UNU have been studying factors that hold together and divide the global village: wars and peacekeeping efforts, poverty and development aid, natural disasters and environmental protection. These are the sorts of issues addressed by the more than 350 scientists and academics from about 100 countries associated with the UNU's 13 institutions around the world, located in places like Macau, Helsinki, Accra and Bonn.

The UNU's 14-story headquarters is located in downtown Tokyo. Osterwalder lives in a spacious penthouse apartment at the top of the conspicuous pyramid-shaped structure designed by the architect Kenzo Tange. From his breakfast table he can see the peak of Mt. Fuji.

His office, two floors below, is still as bare as it was when his predecessor left it four months ago. A small, blue, toy UN flag hangs limply in front of his computer.

"Good morning, Rector," says his assistant. She brings Osterwalder an espresso and hands him his meticulously organized schedule, a reflection of his daily marathon of meetings with ministers and media executives, directors and diplomats, dignitaries and their subordinates. He is, after all, the UN's highest-ranking representative in Asia. Osterwalder reports directly to UN Secretary General Ban Ki-moon and is at the same level as the heads of UN organizations like UNESCO and UNICEF.

Osterwalder is the highest-ranking diplomat, in other words, in the global republic of scholars. The UNU building enjoys the status of an embassy. No other university rector in the world has as much power as he does -- or is so at the mercy of politics.

The UNU is a source of jealousy for many of the UN's 192 member states, despite the fact that it depends on the goodwill of a handful of donor nations, especially Japan, to pay for its roughly $45 million in operating costs. But Japan's generosity has declined in tandem with its sluggish economy. Budget cuts have forced the UNU to rent space in nearby Yokohama and move some of its administrative staff to the Malaysian capital Kuala Lumpur.

To solicit support and raise money, Osterwalder is trying to sell the idea to the Japanese that his global university represents part of their national heritage. His mission is aided by the fact that Japan's Princess Masako is an avid supporter of the UNU. Although Osterwalder has declined to comment on rumors that Masako has her own office at the university's headquarters, it is clear that the world's oldest surviving ruling dynasty is deeply involved. The emperor's goodwill opens many doors, and without Japan the UNU would not exist.

Osterwalder has been indefatigable in promoting his vision. One fundraising expedition takes him to Japan's leading TV network. The CEO strides in, surrounded by his entourage. Osterwalder bows, the CEO bows -- but the ritual comes to a grinding halt when Osterwalder realizes he has forgotten his business cards.

But the Japanese politely disregard his faux pas, allowing Osterwalder to give them what he self-deprecatingly calls his "sales pitch" -- his campaign for a new UNU. Quick on his feet, Osterwalder tells his host that while he may have forgotten his cards, he has brought along an idea: Wouldn't it be possible to promote the development of inexpensive TV sets for developing countries? The Japanese executive politely acknowledges Osterwalder's proposal, and shows him an expensive flat-screen TV instead. 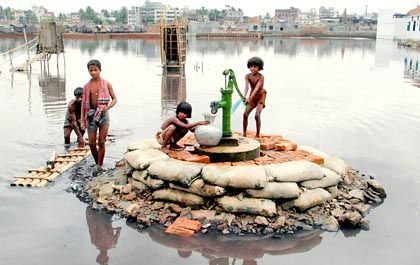 Bangladeshi children after a flood. So far the UN University has served mainly as a think tank to research problems in the global village.

Osterwalder doesn't bat an eyelid. He is a pragmatic idealist, a visionary who knows that small steps are necessary to achieve his goals. As one of his first official acts, he ordered a videoconferencing system installed at all UNU locations to cut down on air travel. He also had the Tokyo building's lobby spruced up so that it could be used for public events.

Osterwalder is by no means a natural when it comes to diplomacy. When the Japanese government tried to install a Japanese vice-rector, he responded coolly: "If he's as good as you say, he'll certainly prevail over the competition."

His lack of diplomatic flair is part of Osterwalder's persona, and perhaps it's even a strength. He stresses the UNU's absolute autonomy. "If I want academic quality, I cannot make political concessions," he says.

He's proud of the UNU's research reports, some of which are even critical of its parent organization, the United Nations. One research group, for instance, studies the "adverse side-effects" of UN peacekeeping missions, such as corruption and prostitution.

Osterwalder doesn't exempt the UNU itself from self-critical examination. "I want to introduce an independent evaluation system," he says. He also plans to eliminate a few research departments while strengthening the UNU's core competencies. Osterwalder, as it turns out, is more than just a visionary. If he has his way, he'll also restructure and streamline the organization.

Perhaps his most important role model is a man named Marie Jean Marquis de Condorcet, who, like Osterwalder, was a mathematician. In his writings, Condorcet sharply criticized customs duties and monopolies and advocated free public education for all. One of the pioneers of a knowledge-based society, he died in prison in 1794. "Condorcet was put through the mills of politics," says Osterwalder. For his part, the UNU's new rector hopes to put these mills to good use. His term lasts five years, officially, but his internal strategy document is titled "UNU 2020."

Osterwalder thinks far into the future, but shows little interest in the university's past. There are two books on its history on his desk. They describe the UNU's founding in 1975 and Japan's hopes of emerging from the long shadow of World War II by donating $100 million to fund the institution. The first rector was an American who had been stationed in Japan during the occupation and spoke fluent Japanese. He described the UNU as an experiment that would face the challenge of having to be "invented, funded, justified and made popular, all at the same time."

Osterwalder has skimmed these books, but, as he says, "I want to form my own, unbiased opinions." It seems as if he wants to model the UNU on Zurich's ETH. His most groundbreaking innovation will be to admit students to the UNU for the first time and to award degrees -- complete with the logo of their global, Japanese-influenced alma mater.

Osterwalder hopes that transforming the UNU into a real university will generate the prestige it needs to attract corporate sponsors. This, in turn, would improve the organization's financial situation and enable it to focus on quality.

But his plans are audacious in a global academic environment in which the awarding of degrees is generally seen as the privilege of conventional, national universities, a privilege member states are unlikely to give up without a fight. The UNU is small; it relies on cooperation. "We should have at least one senior staff member affiliated with every major university," says Osterwalder. "Cooperating with the UNU should be seen as an honor."

To emphasize the organization's global role, Osterwalder also wants to see each of its branches in industrialized nations develop corresponding "twin institutes" in a developing country. The goal, he says, is to reduce the knowledge gap and de-emphasize research monopolies.

How many of his bold plans Osterwalder will be able to put into practice remains to be seen. German support could also play an important role in his venture. The UNU plans to advise the German government ahead of the next G-8 summit, which will be held in Japan in July. There are also rumors that the organization hopes to open a second branch in Germany in addition to its existing UNU Institute in Bonn.

Osterwalder knows that his restructuring plans will encounter resistance, but he insists that he too is adaptable. "I learned a new lesson in diplomacy today," he tells his wife over dinner at a Tokyo restaurant, describing a meeting with a diplomat from an Arab monarchy.

"What I really wanted to tell him was that he needs to invest more in education if he hopes to build a stable democracy," says the UNU rector. "But then I bit my tongue," he adds, noting that more democracy is probably not what the ruler of that Arab monarchy has in mind. "And so I told him: 'No country can move forward economically without education and research.'"

Correction Appended: A correction has been made to this text. Through a translation error, SPIEGEL ONLINE incorrectly stated that Konrad Osterwalder accepted a gift of a television from a Japanese executive. In fact, the executive only showed Osterwalder the television, which was not a gift.