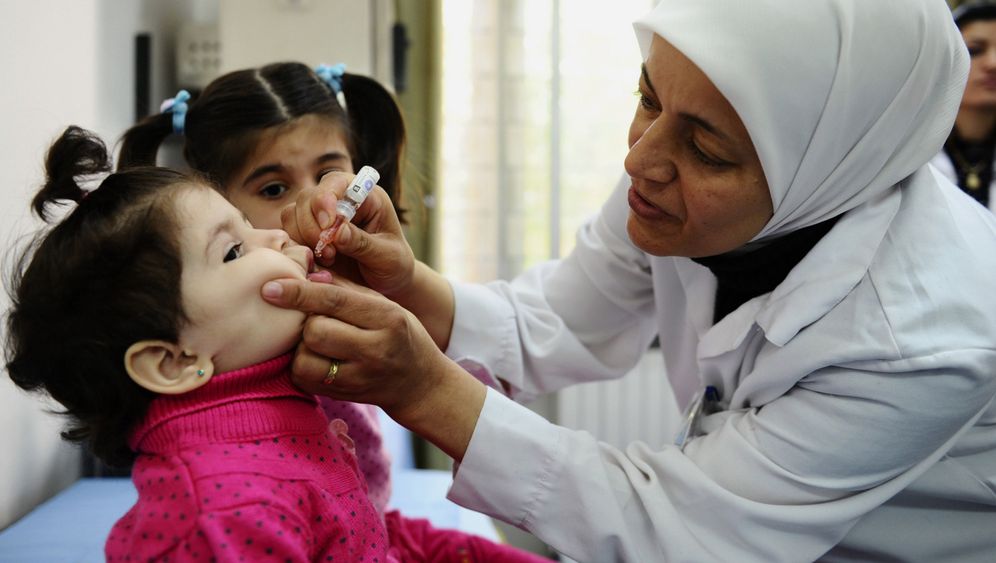 Dr. Khalid Milaji, a Syrian doctor, is very angry with the World Health Organization (WHO). "They knew it!" he says. "We have been warning them for more than a month that polio is spreading, but they refuse to send the vaccine!" Milaji is part of the Polio Control Task Force, a group trying to rein in a new polio epidemic in Syria with Western assistance, and he is furious that the organization has been resisting their calls for help.

This is the same United Nations organization that has waged an extremely successful campaign against infantile paralysis, or poliomyelitis, since 1988. In that time, cases of polio have been reduced by 99 percent and the number of affected countries has declined from 125 to half a dozen.

And yet, for weeks, WHO had blocked a vaccination campaign aimed at containing what is probably the most dangerous outbreak in years, in the Syrian province of Deir ez-Zor. The UN organization even tried to stop the analysis of virus samples.

The reason: WHO has a policy of cooperating exclusively with the government in Damascus, even in times of war, despite the fact that the central government has long since given up on Deir ez-Zor. President Bashar Assad's army controls only two districts of the provincial capital, with the remainder of the whole province in rebel hands.

Over the last two years, the province has been decimated by bombing. There is no more electricity, health care, telephone network or sewage treatment plant. Close to half a million refugees are crowded into towns along the Euphrates River, which is where the first polio cases occurred in September. More cases were reported in Idlib and Aleppo provinces in the middle of last week, with a total count of new reported cases reaching 48 by last Friday, and with new cases appearing daily.

Polio has become a new point of contention within the war, pitting the United States Centers for Disease Control and Prevention (CDC), Syrian doctors and the Turkish Health Ministry against WHO and the government in Damascus.

In the summer, infectious disease experts with the CDC -- cooperating with Syrian doctors from the country's northern and eastern provinces, from which Assad forces had been expelled -- began developing the EWARN early warning system. Personnel at makeshift hospitals were given satellite phones and instructed to report any suspected cases of cholera, typhus, polio and other infectious diseases as early as possible, so any undiscovered spread of these diseases could be prevented. "We have been observing 10 diseases since July," says EWARN Director Dr. Mohammed Alsaad, "so that we can react immediately."

Doctors from this early warning chain discovered a polio outbreak in the town of Sbichan in the southern part of the province in September and, in early October, brought the first stool samples to Turkey. "We called the CDC en route to find out which laboratory in Gaziantep (the nearest big city) could analyze the samples," says Dr. Haytham Shaqla, who accompanied the transport. But when they reached the hospital that had been recommended, they were denied entry. "The management told us WHO had expressly prohibited them from accepting and testing our samples."

Another of the team's doctors, however, had good connections to the provincial government in Gaziantep and called the governor who, in turn, contacted officials in the capital, Ankara. The Turkish Health Ministry immediately sent a team to southern Turkey to pick up the samples.

WHO said that by bringing polio into Turkey, the Syrians had taken the samples outside the jurisdiction of WHO's Middle East division, which includes Syria, and into that of the European division, which includes Turkey. The Turkish government, however, was interested in resolving the situation quickly and had the stool samples from the sick children tested.

A Different Line from Damascus

At the behest of WHO, other samples from Sbichan were sent to Damascus. The Syrian doctors received the official results from the Syrian Health Ministry when they met in Gaziantep, on Oct. 14, to discuss what to do about the outbreak. It claimed that the samples did not contain polio virus, but instead showed evidence of poisoning from oil-contaminated water, and Guillain-Barré syndrome, a rare neurological disorder.

Four days later, CDC officials in Atlanta informed Gaziantep doctors about the results from Ankara. All three cases had tested positive for polio. Additional tests in a Dutch reference laboratory had shown it was a "Type 1" polio virus, which had recently also erupted or been repeatedly reported in Israel, Egypt and Pakistan.

"WHO already knew this, but said nothing to us," says Milaji. "Why are they ignoring us? They wouldn't even talk to us until recently, even though the local councils and rebels constitute the only form of government order in Deir ez-Zor. And we were the ones, after all, who discovered all the cases."

Later in October, only after additional cases had appeared and the epidemic could no longer be kept a secret, the Health Ministry in Damascus suddenly discovered polio virus in the sample. Finally, on Oct. 29, WHO officially announced the outbreak of the epidemic. Why it took weeks for this to happen remains a mystery. Physicians view WHO's behavior as nothing short of negligent.

'Tip of the Iceberg'

That's because polio is incurable once it has been contracted. A simple oral vaccine is enough to prevent infection. Although only an average of one of 200 infected children develops the most serious symptom, permanent paralysis, and others experience only mild symptoms or none at all, anyone who is infected can spread the virus. This is why a minimum vaccination rate of 95 percent is considered necessary to prevent the spread of the disease.

The Syrian outbreak contains all the ingredients for a disastrous epidemic: war, about 5 million internally displaced persons living under crowded and appalling sanitary conditions, a large group of people constantly on the move, and up to 4,000 people a day fleeing across borders into neighboring countries. In large parts of Syria, there is no medical care and there have been no vaccinations in two years.

Dr. Bruce Aylward, assistant director-general at WHO and, since 1998, the head of its polio campaign, calls the outbreak a time bomb, saying the confirmed cases are "merely the tip of the iceberg" and the entire Middle East is at risk for a massive epidemic. WHO now plans to vaccinate all infants in concentric circles surrounding the epicenter of the outbreak, which amounts to 20 million children in Jordan, Lebanon, Turkey and other neighboring countries.

Crisis at the Epicenter

But little is happening at the epicenter itself. Every morning, hundreds of mothers crowd in front of the improvised infirmaries, waiting for a vaccine that won't arrive. In biweekly shifts, a team of doctors from the Polio Control Task Force comes to the region to follow the epidemic's development and conduct an information campaign, using the radio, mosques and brochures to spread their message. The doctors advise residents to wash their hands after using the toilet and before eating. "But it becomes a joke when you tell people to drink only clean water," says Dr. Bashir, the director of the task force. "Eighty percent of the people here get their drinking water from the Euphrates, where all untreated sewage goes. We are now advising people there to disinfect the water by adding two spoons of chlorine bleach to every 1,000 liters. It isn't exactly healthy, but what should we do?"

The task force would establish a refrigeration chain for shipping and storage, says Bashir, but WHO first has to release the vaccines. "We have a completed plan, we have the health centers, and we could drum up the 1,000 volunteers needed for a door-to-door campaign -- and now we wait." Although he recognizes WHO's dilemma, he disagrees with its decision. "If they accept us," he says, "they'll be breaking international rules. If they don't accept us, no one will stop the epidemic. The regime has no interest in doing so, because children have been vaccinated in the areas it controls."

'The Government Has Never Lied'

But WHO continues to insist on cooperating solely with the Assad government, and no one else.

"If we delivered vaccines across the Turkish border, that would be a red line for Damascus," says Aylward. "And the Syrian government will not accept any results from other labs. Last week, I met the Syrian minister of health, and the government has assured us that it will vaccinate all children in Syria. They have said they will do that, so we have to push them as hard as possible. They have said so, so we will hold them accountable. The government has never lied to us."

This is an odd assumption, given the fact that the regime has been bombing hospitals for more than two years, has prohibited medical personnel from treating victims of the airstrikes in government hospitals and has conducted targeted killings of doctors and pharmacists who treat and supply medicine to people in rebel-held areas.

On Nov. 4, Syrian Deputy Foreign Minister Faisal Muqdad said the government grants humanitarian access everywhere and has never blocked aid shipments. But for months now, more than 600,000 people in the northeastern suburbs of Damascus alone have been completely cut off from the outside world. Regime forces are not even allowing food, not to mention drugs and vaccines, to be brought into these areas. In September, children began dying of starvation in two other besieged suburbs south of the capital.

'The Virus is Apolitical'

"It is idiocy or criminal -- depending on your position and responsibility -- to accept the systematic lies of the regime in Damascus," says a Western diplomat in Gaziantep. "The UN should stop closing its eyes to what is happening in plain sight. Otherwise they are failing their mandate."

Throughout last week, experts with WHO and other international organizations held meetings in Gaziantep with doctors and local representatives from the provinces to learn how many people are located in each region. A vaccination campaign could begin within days if WHO released the vaccine. But it doesn't look promising. Dr. Milaji takes a cynical and sobering view: "Assad has his chemical weapons. We have our biological weapon. Although it mostly affects us first, it will eventually spread to the entire region. When it comes to that, the virus is apolitical."