Everything had been so perfectly planned. Construction of the new NATO headquarters building near the Brussels Airport, a giant glass-and-steel structure to house the world's most powerful military alliance in the future, will have cost more than €1 billion ($1.07 billion) by the time it opens next year. The mammoth building was supposed to be officially dedicated at the next NATO summit, in the spring of 2017, and Secretary General Jens Stoltenberg had planned to extend a hearty welcome to the new US president, Hillary Clinton. At least that's how officials at NATO headquarters planned it.

Anything else seemed unthinkable. So unthinkable that even the female English pronouns "she" and "her" had crept into internal written correspondence to refer to the future occupant of the White House.

But there will be no female president. Instead of Clinton, a reliable partner and good, old acquaintance in many trans-Atlantic circles, Donald Trump will be coming to Brussels -- the same man who described the alliance as "obsolete" in his campaign. If he even comes, that is.

Fearing that Trump won't even attend the NATO summit, only a few weeks after his inauguration, the alliance has postponed the event. A meeting of NATO leaders without the presence of the American president, after all, would be a signal of its decline. Now organizers are envisioning a date next summer, in the hope that, by then, Trump will have recognized that the United States will also need NATO in the future.

There are enormous doubts that this will happen. Consternation over the election of Donald Trump as the next US president is especially great within the Brussels alliance. "For the first time," says a German NATO officer, "a withdrawal from NATO by the United States is on the table, or at least a threat." That would mean the end of the alliance.

Indeed, many inside NATO are anticipating the worst following Trump's election win. The scenario of a Trump presidency is described in detail in a secret report by the staff of Secretary General Stoltenberg. In it, strategists examine what it would mean if Trump made good on his threat to become less involved in Europe's security in the future and possibly withdraw a portion of American troops from the Continent.

"As a result of the election of Donald Trump, we are experiencing a moment of extreme and unprecedented uncertainty in the trans-Atlantic relationship," says Wolfgang Ischinger, a former German ambassador in Washington and head of the influential Munich Security Conference. During the election campaign, Trump had questioned the cornerstone of NATO, the mutual defense commitment under Article 5. Washington's NATO allies could only expect support, he said, if they've "paid their bills."

The future American president does not perceive NATO as a mutual protective shield of the Western community of values, but rather as a small group of weakening countries that are unable to defend themselves and, therefore, should pay protection money to the United States to provide for their security. That's why Ischinger wants the president-elect, if possible, to "provide the NATO partners with confirmation that he does not question the United States' election obligations, including Article 5," prior to his inauguration.

The consequences would be worse for Eastern Europeans, because it is the American commitment to NATO that protects them from possible attempts by Russia to regain control over territory once under Soviet dominance. Under one scenario the NATO strategists have considered, Trump could withdraw Washington's commitment to providing rotating US troops in Eastern Europe. Without this visible sign of American support, NATO's eastern flank would be largely unprotected against Russian aggression -- a nightmare for Eastern Europeans. The entire future of the NATO missile defense system planned in Romania and Poland could also be threatened.

The three Baltic countries and Poland are already worried that Trump, who admires Putin, could team up with the autocrat in Moscow at their expense. They worry that Trump, the author of "The Art of the Deal," could bypass them and reach an agreement directly with the Kremlin. Trump has repeatedly made clear his foreign policy will revolve around protecting American interests and not in defending Western values.

"I worry about the future," says Ryszard Schnepf, former Polish ambassador to the United States. He describes Trump as a power-loving man fascinated by Putin. "He could hit upon the idea of bringing about a bipolar world again, and in that world we are merely a playing card."

A new Treaty of Yalta, in which Washington and Moscow defined their respective spheres of influence, would threaten the independence of the Eastern European allies. It is very important that we do not "repeat the mistakes of the past," cautions Lithuanian Foreign Minister Linas Linkevicius. Agreements with Moscow need to be based on values, principles and international law, he explains, and not on interests or spheres of influence.

If Trump is serious about reducing the American contingent in Europe, large NATO countries like Germany would hardly be in any position to offset the losses. They lack enough units to truly replace the Americans. Instead, leading minds in the alliance suspect that this could trigger a debate over NATO's nuclear strategy -- an issue many European governments are determined to avoid out of domestic political considerations. However, if conventional troops no longer provide the necessary clout, the nuclear option automatically comes to the fore.

In their most favorable scenario, the NATO strategists assumed that the new US president would only strictly insist that the Europeans spend more money on their security. During the campaign, after all, Trump left no doubt that he intends to radically change burden sharing within the Western alliance.

One of Trump's closest advisers, General Mike Flynn, the former head of US military intelligence, told SPIEGEL in an interview in July that, when it comes to money, Trump will pay little attention to the carefully tended harmony in the alliance. "We have to have these alliances going forward and see who's going to pay for them," Flynn said. He added that "NATO as a political alliance does need to be relooked at in terms of everything, (including) resourcing and capabilities," soon after Trump's administration takes office.

At the 2014 NATO summit in Wales, the member states agreed to a goal of spending 2 percent of their national GDP on defense. But few countries are currently meeting that goal. Germany, the second-strongest economy in the alliance, next to the United States, spends only 1.19 percent of its GDP on defense.

Trump is now threatening to make the mutual defense commitment under Article 5 dependent on fulfilling this goal, or even to increase the percentage. For Germany, 2 percent would already signify a dramatic increase in the defense budget, from about €34 billion today to roughly €65 billion.

In any case, NATO officials are preparing themselves for growing demands on the Europeans. "Europe has no other choice: It has to strengthen the European column in NATO," says EU foreign policy expert Alexander Graf Lambsdorff, a member of the pro-business Free Democratic Party.

Under pressure from the outgoing US administration, the Europeans have already agreed to increase their share. In Brussels, officials from the 28 member states ratified the alliance's top-secret Blue Book, a performance specification of sorts that defines, until 2032, the numbers of troops, aircraft, ships, tanks and soldiers each country is to provide for the alliance command posts. For Germany, the document calls for a 1-percent increase in its military contributions to NATO, bringing Berlin's total contribution to 3 percent of GDP. As feasible as this may sound, though, it actually means that Germany would have to substantially increase its investments in defense once again. The current budget of €130 billion until 2030 would be far too small.

At the moment, officials at the Defense Ministry in Berlin fear that Trump will overturn the painstakingly negotiated agreement. "Right now, no one knows whether the 1-percent increase will still be enough," says a German NATO officer.

Many in Brussels and Berlin are now clinging to the hope that a President Trump can be persuaded to abandon some of the pledges he made during his campaign. Europeans will have to explain to Trump why NATO is relevant, say officials in Berlin. The best approach, they believe, is to remind him that he promised to make American great again. "If Trump ignores the fact that he is not going to find any more reliable partners than those in Europe, he will undermine the United States' role as a superpower," warns Ischinger.

Update: Following his first meeting last week with Donald Trump, President Barack Obama said Monday that the president-elect had "expressed a great interest in maintaining our core strategic relationships." Obama, who is in Europe this week, added, "I think that's one of the most important functions I can serve at this stage, during this trip, that there is no weakening of resolve when it comes to America's commitment to maintaining a strong and robust NATO relationship. And that there is a recognition that those alliances aren't just good for Europe, but they're good for the United States and vital for the world." But Obama also pressured NATO's European partners to increase their military spending. During a stop in Greece on Tuesday, he praised the country for being one of five NATO allies that dedicated at least 2 percent of its budget to defense spending, despite difficult times economically, and said that others should too.

Meanwhile, NATO chief Stoltenberg stated Tuesday he is "certain" Trump "will live up to all of the commitments of the United States in the alliance." 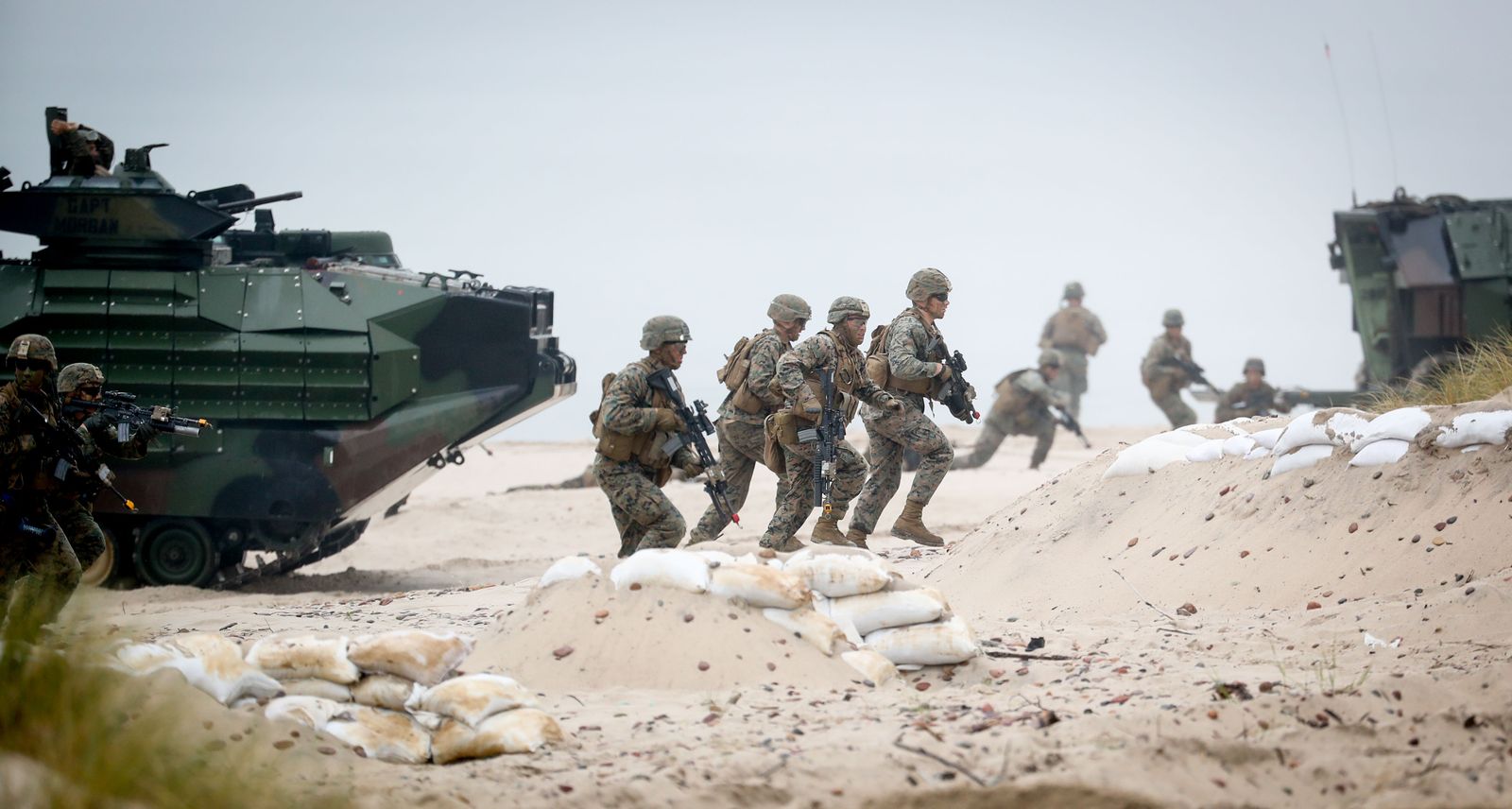