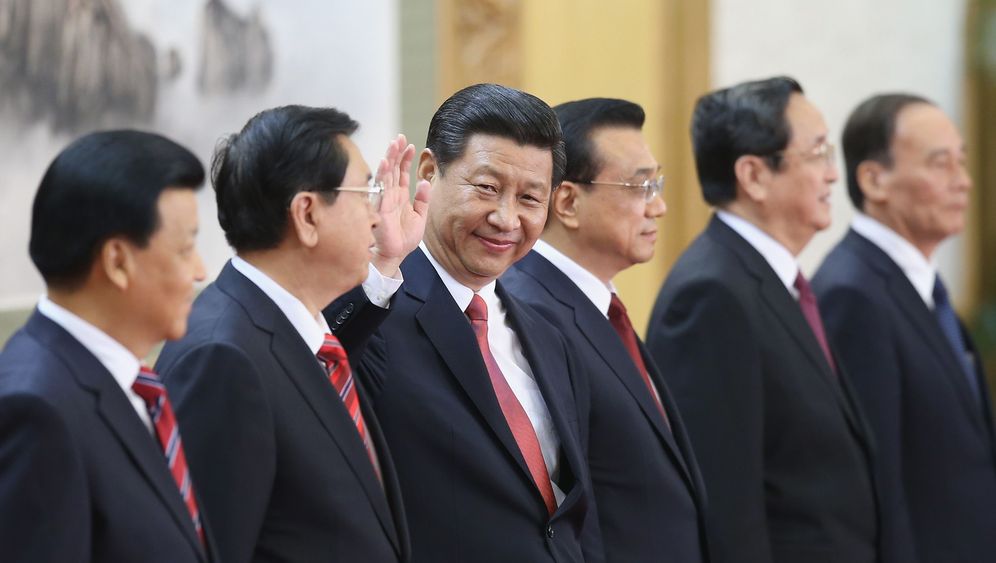 A door opens in Beijing, and small group of men with black hair, dark suits and unassuming ties marches out. They're China's new leaders. This is just how things happened 25, 20 and 10 years ago. But the country is vastly different than it was at any of those times.

The Communist Party congress was as secretive as a Vatican conclave, and its official minutes make no mention of just how breathtaking the change it has ushered in is for the country outside the Great Hall of the People. Thursday morning, after months of behind-the-scenes jostling for power and the weeklong congress, China's Communist Party presented the seven new men who will make up the Politburo Standing Committee, the party's leading body.

Xi Jinping, 59, has been appointed the general secretary of the Communist Party as well as chairman of the military commission, and he will become China's new president in March. Li Keqiang, has become the No. 2 figure in the party and is expected to become the country's premier or head of the National People's Congress in March.

Standing to the right of Xi and Li is a row of five men who have been viewed as the likeliest appointees to the Standing Committee for weeks. There is Zhang Dejiang, 65, the man who replaced Bo Xilai as the party chief of the massive city of Chongqing six months ago after Bo had his career upended by a murder and corruption scandal. There is Yu Zhengsheng, 65, the party chief of Shanghai, who is seen as sharing political views with Deng Xiaoping, the reformist who led the party between 1982 and 1987. There is Liu Yunshan, 65, who has been serving as propaganda chief. Lastly, there is Wang Qishan, 64, China's chief economist, and Zhang Gaoli, the surprisingly young-looking 65-year-old party chief of Tianjin, China's fourth-largest city.

One doesn't have to be an expert in Chinese politics to quickly discern who the boss is among these seven powerful men. Xi Jinping steps up to the rostrum with a smile and -- to the surprise of the reporters who have been kept waiting for more than an hour -- politely apologizes for the delay before introducing the other men. He speaks without notes, shifts his gaze around the room and never loses his train of thought. Western politicians have described Xi as a man who exudes tranquillity, and this is precisely the impression he makes on his first day as the head of China's Communist Party.

Promising a Better Life for All

This impression of calmness is only heightened when you compare Xi with the five other men standing on the stage. One of them attempts a smile, and Li Keqiang even manages a brief wave. But the only man exuding the same relaxed air as Xi is the one standing all the way to the right, who allows himself to occasionally shift his weight from leg to leg. This is Wang Qishan, who has been the vice premier in charge of the economy and financial affairs. The party apparently has much faith in him: On Wednesday, the Central Committee appointed him to serve as the head of the party's disciplinary committee -- a post guaranteed to keep him busy.

Indeed, the issue of discipline was one of the main subjects of the short speech Xi delivered after making the round of introductions. He noted how some party members had recently made grave mistakes involving corruption and bribe-taking. "We must make every effort to solve these problems," Xi said. "The whole party must stay on full alert." Xi refrained from naming names, such as that of Bo Xilai or Liu Zhijun, the minister of railways who was recently fired and is awaiting trial on corruption charges. But his threat somehow seems more credible than those of his predecessor, Hu Jintao, who touched upon similar issues during the farewell speech he delivered last Thursday.

Xi mentioned "ethnic groups" three times in his address, placing much more emphasis on the issue than Hu did in his speech. It is an extremely pressing and worrisome issue. Since the spring, more than 60 Tibetan monks have immolated themselves, and Xi seems determined to make sure that the regime doesn't ignore the tragedy.

Xi also praised "the people" several times for their patience in building up the country. He said that the focus will now be on social security and providing people with "a better life." This might not be the "happiness" that is enshrined in the United States' Declaration of Independence and that many Chinese long for -- but it is still something.

Still, Xi left no doubt that he believes in the party's collectivist worldview. He noted that the capabilities of each individual are "limited," but that those of the party as a whole are not. He said that the responsibility of China's new leadership is "as heavy as Mount Tai," one of the five sacred mountains of Taoism. As long as it stays true to "socialism with Chinese characteristics," he continued, the party's position of leadership is ensured.

This is unmistakably the core of the dogma that the party is so eager to preserve -- but one that has increasingly little to do with the lives of so many Chinese. This is the core that the party will continue to embrace under the leadership of Xi Jinping and his team. But, as his speech made clear, the tone of China's leaders might soon change.