Every tourist who visits Vienna sets aside at least half a day for the Prater amusement park and an evening at a Heurige, a wine tavern. Visitors to Hamburg enjoy a tour of the harbor by day and a walk through the Reeperbahn red-light district by night. And those who decide to visit Krakow know exactly what is in store for them: the "Muzeum Auschwitz." The Nazi extermination camp, where a million Jews were killed, is an hour's drive away and is the biggest attraction Krakow offers -- or better yet, imposes upon -- its visitors.

The trip to the former concentration camp can be booked at any hotel. For about €25 ($33), visitors to Auschwitz can leave Krakow after breakfast and be back before dinner. There are also group discounts.

Cars park to the left, busses to the right, and swarms of tourists follow along behind tour guides. Visitors to Auschwitz have their pictures taken beneath the camp gate, where an infamous sign reads "Arbeit macht frei" ("Work sets you free"), and in front of the gallows where camp commandant Rudolf Höss was hung in 1947. Next to the gallows is the entrance to the first gas chamber, which was built in the main camp.

Then the tour continues to Birkenau, the "actual" extermination camp. By the end of the day, visitors have just enough time to buy a few postcards in the souvenir shop, where a postcard from Auschwitz is enough to eclipse all the kitsch sold at religious pilgrimage sites from Altötting in Bavaria to Lourdes in southern France.


The players on Germany's national soccer team are now expected to pay a visit to this carnival of horror when they travel to Poland for the UEFA European Football Championship in June. "It would send a disastrous message to the rest of the world" if the German players were to bypass Auschwitz, says Dieter Graumann, the president of the Central Council of Jews in Germany, because "the young players don't bear the blame, but they do bear the responsibility."

It's a sentence that one hears again and again, one of those platitudes that wander from one pocket to another like loose change, until they are completely worn -- and yet are still not removed from circulation.

The notion that the players "don't bear the blame" is so obvious that it shouldn't have to be said at all, unless someone is trying to suggest the opposite in a dialectical way. And for what should they bear a responsibility?

That the "Muzeum Auschwitz" doesn't turn into a camp again? That the world doesn't forget what happened in Auschwitz? Hordes of historians, filmmakers, journalists and museum directors are making sure that that won't happen. No other place in the world has been as thoroughly and effectively documented as Auschwitz. And it can't be up to the footballers to fill the gaps that journalists and authors like Guido Knopp might have overlooked in the many TV documentaries about the Third Reich and the Nazis they have produced for German audiences.

German Football Team Has No Business at Auschwitz

What are the footballers supposed to do in Auschwitz? Swear that they're sorry? Explain that this sort of thing can "never happen again?" And has anyone thought about what would happen if the German players visited Auschwitz and became so overcome by emotion that they lost the tournament?

It isn't about the players visiting Auschwitz. It's about the images of the visit that will be broadcast to the rest of the world afterwards -- as if they were touring an SOS Children's Village in Africa to draw the world's attention to the misery of war orphans.

The German footballers have no business going to Auschwitz. That is, unless some of them choose to go there on their own and without the cameras, for personal reasons that would make them accountable to no one.

If the German Football Association wanted to take Graumann's advice and "send a message," it could come up with something more original than an obligatory visit to a place where wreaths are deposited, and where visitors can show their retroactive consternation for free. Perhaps the team could play a friendly match against Israel in Sderot, the town on the border with Gaza that frequently comes under fire from Hamas rockets. With an advance warning time of about 15 seconds, the players would quickly realize what it means to be constantly on the alert.

Showing solidarity for dead Jews is a cheap exercise. The people who were murdered can't be killed again, nor can they be rescued retroactively. But in case someone does feel something resembling "responsibility" -- and there's nothing wrong with that, in principle -- then he would be better off declaring his solidarity with those who are alive today -- and would like to stay that way. 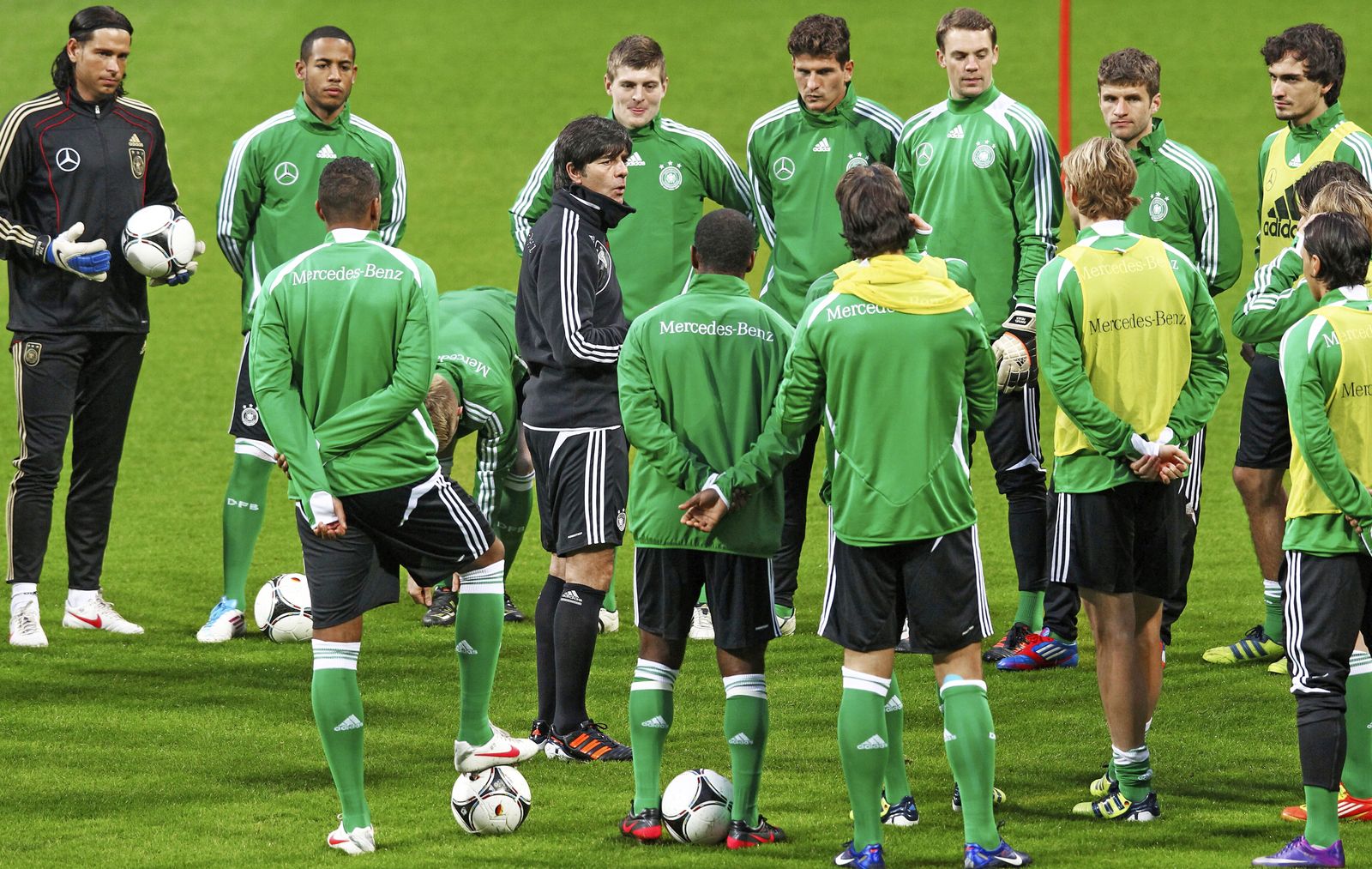 The German national football team during a training session in February: "The young players don't bear the blame, but they do bear the responsibility."