The war between the self-proclaimed Houthi government in Sanaa and the Saudi Arabian-led coalition has thus far resulted in the loss of 10,000 lives. Hisham-Sharaf Abdullah, 60, was once a minister in the cabinet of Abd Rabbuh Mansur Hadi, the country's elected president. Today, Sharaf is the foreign minister of self-proclaimed Houthi government, which is not internationally recognized. The Houthis are fighting against Hadi, elements of the divided Yemeni army and the Saudi Arabia-led coalition.

SPIEGEL: The killing and destruction has been ongoing since the beginning of the civil war in 2015 and 7 million people are now facing starvation. How can the violence be stopped?

Sharaf: Our enemies want to starve us. They are trying to force us by bombs and economic isolation to the negotiating table. But they are only dreaming.

SPIEGEL: What is the concrete situation in the Yemeni capital of Sanaa?

Sharaf: The Saudi-Arab-led coalition, which supports the president, Abd Rabbuh Mansur Hadi, who is not accepted by us, has threatened to shoot down any transport aircraft trying to land in Sanaa. After bombing our air defense systems, they imposed a no-fly zone in our skies. They are blockading the main port, Hudaida, through which 80 per cent of aid supplies arrive, along with most of our imports. Between 70 and 80 percent of government revenues go to Aden, while we are cut off from all cash flows. For the last eight months, not a single civil servant has received their salary. But we can still hold out for a long time, if necessary. The Saudis, though, don't have that much time.

SPIEGEL: The military coalition recently announced its intention to attack the port of Hudaida. Will there ultimately be a military solution to this conflict after all?

Sharaf: If they really dare, they'll see hell. The Saudis can bomb us from the air, but victory will be decided on the ground. I don't believe there is a military solution for the crisis in Yemen. The only way is to sit around a negotiating table and look for a peaceful settlement.

Sharaf: A battle in Hudaida would be a disaster. There would be lots of casualties on both sides. Hundreds of thousands of people would be driven out of the city and the port is the supply line for millions of people, who would then be cut off.

SPIEGEL: The primary reason for Saudi Arabia joining the war in March 2015 is your alliance with Iran. Isn't that a rather high price to pay for a strategic alliance that has transformed Yemen into the site of a proxy war between regional rivals?

Sharaf: Ask the Americans and the Saudis show the world pictures or documents proving Iranian presence in Yemen. If the Saudis are keen to keep Iran away, they can settle their disputes away from us. We have little contact with Iran. Iran does not support us to the degree the Saudi media claims.

SPIEGEL: Unfortunately, nobody believes you.

Sharaf: When I recently met the charge d'affaires of the Iranian Embassy, I officially requested 12 anti-aircraft missiles to protect our people from the daily bombing, so we could shoot down the Saudi Arabian aircraft. He said he could not help us. The Iranians would not interfere. This is the situation we are in.

SPIEGEL: What kind of alliance do the Houthis have with Tehran?

Sharaf: The fraternity with Iran, which is promoted by the media, is a product of Saudi Arabian propaganda. It does not exist. We owe nothing to the Iranians. If this conflict were really about Iran, then they should impose sanctions on Iran. Why do they besiege us for two years instead of stopping the flow of money and arms?

SPIEGEL: United Nations Resolution 2216 requires that you return the weapons you have captured from the army, withdraw from territories you have seized and return to the negotiating table. Why have you not done so?

Sharaf: This UN resolution was adopted in April 2015, when the situation was completely different. Now, we are exposed to unjustified Saudi aggression and a massive economic war. It would have been possible to assemble and discuss our differences in the early stages. But now, Hadi is only acting as an emissary of the Saudi regime, implementing their agenda and sacrificing his people. It is not that we are refusing to negotiate, but we insist on the presence of the main aggressor in such a political process. No peace can be sustainable without the Saudis because they are financing the war and will continue to do so if they are not stopped by the superpowers from interfering in our affairs.

SPIEGEL: You, in turn, are cooperating with ex-President Ali Abdullah Saleh, who led six wars against the Houthis. How did this unexpected coalition come about?

Sharaf: When the Houthis took over government institutions in Sanaa in autumn 2014, a plane belonging to the royal Saudi family landed at Sanaa airport late that October. The Saudi king's envoy offered former President Saleh to fight the Houthis together with Saudi allies. The Saudis feared the Houthi advance in the region. Behind the offer - which was essentially a blank check to fight to Houthis with all means necessary, meaning "to destroy" them - was the Saudi minister of defense, today's King Salman. I was there with the former President and witnessed the event. Saleh refused, offering instead a political solution among all sides including the Houthis. In turn, the Saudis became angry and the Saudi envoy left without a deal. That is why Saleh and the Saudis are now hostile.

SPIEGEL: The Houthis used to have excellent contacts to Riyadh and the USA. What changed?

Sharaf: The Saudis are afraid of Iran and the U.S. is taking advantage of that fear to do business in Saudi Arabia. They are selling Riyadh advanced military equipment and expensive consultants along with surveillance and weapons systems so that the American economy prospers. Yemenis are the victims of these mutual interests between the Saudis and the Americans.

SPIEGEL: Chancellor Merkel was in Riyadh not long ago, where she urged an end of the Saudi bombardment. Is that helpful?

Sharaf: Ms. Merkel said some nice words and called for an end to the aggression, and we appreciate that. But just a few months earlier, her defense minister and the Saudi defense minister signed a contract for German officers to train Saudi Arabian military officers. I ask you, how serious are the fine words of Chancellor Merkel while you are helping the Saudis kill our people?

SPIEGEL: Former President Saleh repeatedly negotiated with the United Arab Emirates regarding a possible peace agreement between your group and the Saudis, but so far nothing has come of it. Under what circumstances could constructive negotiations take place?

Sharaf: We can have a peace deal if there are positive signals from the aggressor. The Saudis should stop the bombings and open the Sanaa as a sign of their good intentions. Then we would stop all military action against the Saudis and their allies. Negotiations could start immediately if the Saudis were on board. The Europeans could play a positive role as peace-brokers. We would trust you in Germany, Italy or the European Union in this role.

I hereby call on the European Union and its Commission to help the UN in its efforts for peace in Yemen. 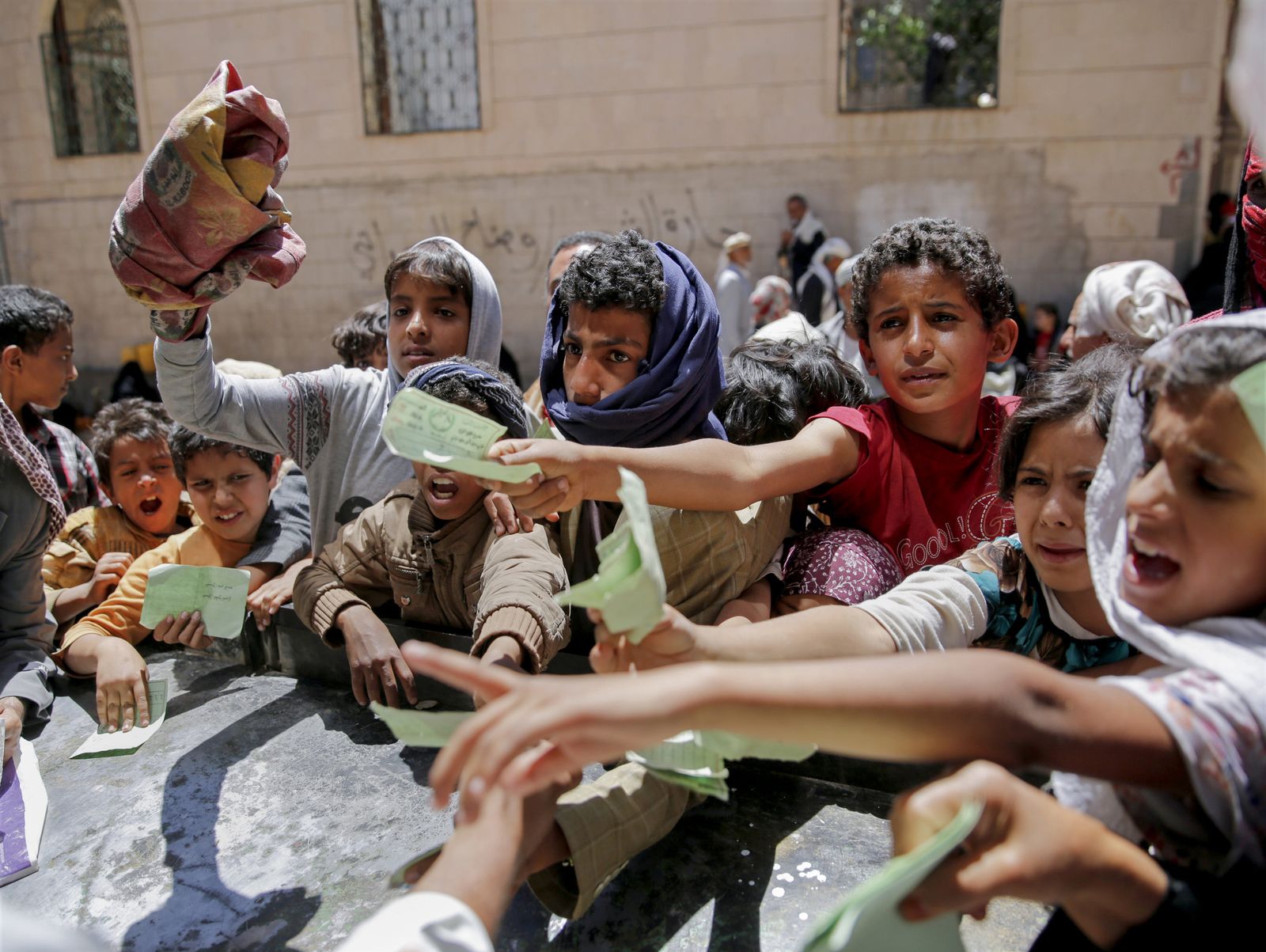 Children in Sanaa receiving food from a local aid organization