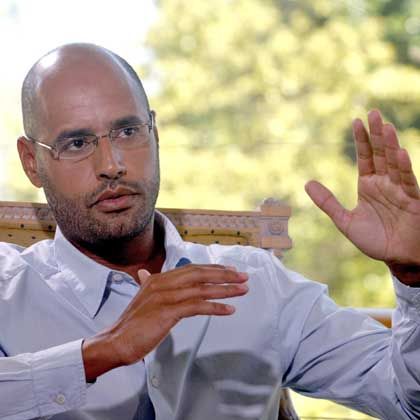 Seif Al-Islam Gadhafi, considered both a reformer and a candidate to succeed his father in power, was a player in the prisoners' release.

Libyan leader Moammar Gadhafi's son has confirmed allegations made by a Palestinian-Bulgarian doctor and five Bulgarian nurses that they were tortured while being held captive in Libya for nine years.

Since their European Union-brokered release last month, the six have given interviews with the European press, including SPIEGEL, citing specific torture techniques and methods used on them while being held on charges of infecting Libyan children with HIV.

In an interview with Al-Jazeera released in excerpts on Wednesday, Seif Al-Islam Gadhafi, considered by some analysts to be a reformer, confirmed most of the allegations.

"Yes, they were tortured by electricity and they were threatened that their family members would be targeted," he said. Gadhafi did not apologize for their treatment, and even said allegations made by Palestinian-Bulgarian doctor Sharaf al-Hazouz, who was arrested with the five nurses and later awarded Bulgarian citizenship, were false.

"A lot of what the Palestinian doctor has claimed are merely lies," he said.

In interviews with European media and a long first-person account in SPIEGEL, al-Hazouz detailed the torture he was subjected to. He said he was crowded into cells with as many as 70 other prisoners, where they were forced to sleep in shifts in uncomfortable positions. He said Libyan guards tortured him and the nurses with electrical shocks and locked him in a room with three dogs.

"They ordered the animals to attack me. My leg is covered with scars from their bites," he told SPIEGEL. "I had a large hole in my knee. I was served my meals in the bowl they used for the dogs."

When he became unconscious following electrical torture, the guards would wake him up with a bucket of ice water, he said. The doctor and nurses were sometimes tortured in the same room, and al-Hazouz claimed guards raped the women.

The doctor lashed out at Gadhafi following his disparaging comments to Al-Jazeera. "Seif Al-Islam always tells only a part of the truth, manipulating the media," he told the Associated Press. "I told the full truth ... All of us were tortured like animals."

One of the nurses, Snezhana Dimitrova, said she was pleased at the younger Gadhafi's admission. "The fact that a Libyan, and the son of Gadhafi at that, has told the truth is very gratifying and I thank him for it," she told the AP.

Libyan police arrested the six in 1999 and accused them of deliberately infecting more than 400 children with HIV while working at a Libyan hospital. The group was forced to sign confessions -- which they later recanted following their release. Health experts later blamed unhygienic conditions at the hospital for the HIV infections among the children.