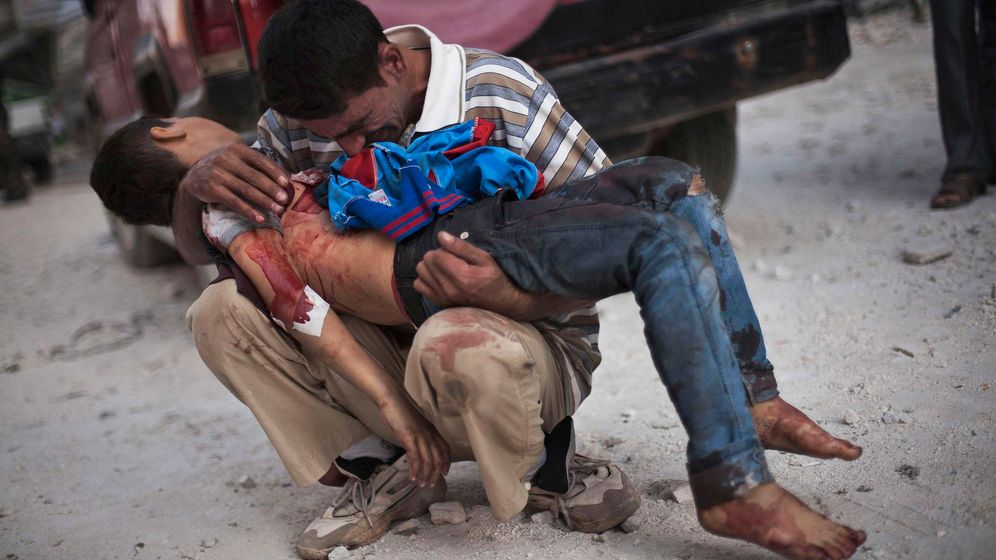 A young man in his mid-twenties with a stubbly beard is driving a delivery van through the rubble-strewn streets of the northern Syrian town of Azaz. He speaks excellent German and calls himself Yousuf. The man in the passenger seat is around the same age and also sports a beard. He won't even reveal his first name, but he also speaks nearly perfect German.

"After we go back home, we don't want any problems with Germany's foreign and domestic intelligence agencies," says Yousuf. This also explains why the two men refuse to divulge what city in Germany they come from. "Before we entered Syria, the Turks had already put our passport information into their system," he adds. "They know exactly who we are. If they pass that on to the Germans, we're sunk, even though we're just here on a humanitarian mission."

A humanitarian mission? That's the euphemism foreign jihadists use when they try to explain their presence in Syria.

There are reportedly a few hundred Muslims from Western countries who are fighting alongside the rebels to topple Syrian dictator Bashar al-Assad. It's a relatively small number compared to the perhaps 100,000 insurgents in the country.

"We know that jihadists from Germany, who we have already been observing here at home, are currently in Syria and fighting there," German Interior Minister Hans-Peter Friedrich said last week. German intelligence agencies are primarily concerned that such men will be trained during the civil war and later return to the West as radicalized extremists -- assuming they survive.

Jamal Mohamed Abd al-Kadir, a 24-year-old Canadian who was also in Azaz, often referred to his humanitarian mission -- before he was killed in battle. His family originally came from a village near the Kurdish-Syrian city of Afrin, but Abd al-Kadir grew up in Montreal. He was a university student when war erupted in Syria.

"Assad, this monster, is destroying his country and the entire world is merely watching," the young man with the wavy black hair exclaimed back in September. "That's why I've come here to help my Muslim brothers."

A photo from Abd al-Kadir's college days shows him at home, with his hair in a ponytail and wearing blue jeans. Nothing about him matched the usual image in the West of the hardcore jihadist. The brainwashing that he was subjected to in the Salafist battalions in northern Syria quickly produced the desired effect. Only a few weeks after he arrived in Syria, he said: "Your media in the West is constantly lying. You always talk about al-Qaida, but in reality it's your countries that are the real terrorists. They kill Muslim Afghans and Palestinians."

Later, Abd al-Kadir transferred to the radical Support Front for the People of Greater Syria, widely referred to as the Al-Nusra Front. "The people in the Support Front quickly realized that the Canadian was a clever fellow," says one of Abd al-Kadir's former fellow fighters. "And they always have a use for people like that. They brought him to Damascus, and that's where he was killed," he recalls, adding that "he was his parents' only son, and they had tried to convince him to drop the 'holy war' and come back home."

The 'Land of Sham'

The men of the Islamist Al-Nusra Front, who see their group as part of al-Qaida, are not particularly concerned about losses among their own ranks. In a small shop in Azaz, one of the group's commanders is sitting with a young Libyan who has just arrived.

First, he explains to the new arrival that in the Support Front they don't use the name "Syria," but rather the "Land of Sham." Both "Land of Sham" and "Greater Syria" are nationalist terms that refer to a geographical space covering nearly the entire Levant, which the fighters hope to transform into one big Islamic state.

Then the older man says to the younger one: "I hope that you will soon die in battle and go to paradise."

Many foreign jihadists are between the ages of 18 and 28 and of Arab descent, or at least from Muslim families -- and have no combat experience whatsoever. They are essentially cannon fodder. They come from Gulf states like Saudi Arabia, from North Africa, Belgium, France, the Netherlands, Great Britain and North America. Most of them receive rudimentary training in camps, primarily in northern Syria.

The Libyans have a special status. Speaking via Skype, a physician from the western Libyan city of Zawiya talks about how he lost a relative in Syria. "When our young men leave Libya, they are very rarely radical Islamists," he says, "but when they return, we hardly recognize them anymore. They have been brainwashed."

Libya is without a doubt the most important source of arms for the Syrian resistance. For the Libyans, it's not about the prospect of exporting ideology or gaining strategic interests. Rather, they know what it means when a dictator is prepared to kill his own people.

The Libyan recruits nearly always take the same route to Syria: They fly with Turkish Airlines to Istanbul. Libyans require no visa to enter Turkey. From Istanbul, they catch a connecting flight to Antakya or Gaziantep, and then continue overland to border towns like Reyhanli and Kilis. They often receive help from Islamic networks.

"In Zawiya there is a Salafist sheikh of the most radical sort who is known all over town and helps them," says the Libyan physician. "Anyone who has no money to pay for the trip, " he contends, "brings along his Kalashnikov and hands it over to the sheikh's people" -- who then sell the weapon.

Although most foreign fighters in Syria are extremely young and inexperienced, there are a few veteran fighters. One of them is a 52-year-old Egyptian with a bushy beard. He would rather not mention his name, but he does talk about how he fought alongside the Afghan mujahedeen to expel the Soviets.

After his return from Afghanistan in 1992, he says he was arrested and imprisoned for 15 years under Egyptian President Hosni Mubarak. "In Syria, young people are forced to do everything they're told -- they can't freely choose their future," he says, referring to the lives of his Syrian brethren under Assad: "In Europe, though, young people are perfectly free to choose their own path in life."

In Europe, he believes, they could have a better chance of following the way of the Prophet Muhammad than in Syria under the dictator Assad. He says that there is more breathing room there, even for Islamists -- which is why he is waging jihad to make Syria a bit more like Europe.